We may be in a period during which materials prices are set to increase, despite a lack of robust economic growth, said ABC's chief economist 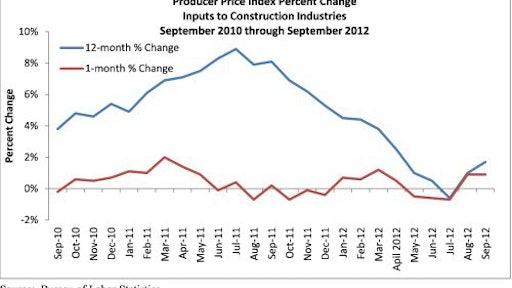 Materials prices rose for the second straight month and are up 1.1% from the previous quarter and 1.7% Year over year.

“This month represented a second consecutive month of construction materials price increases,” said Associated Builders and Contractors Chief Economist Anirban Basu. “Based purely on macroeconomic data, it would have been logical for materials prices to fall given the recent news of ongoing global economic deceleration, including major Asian and Latin American economies.

“The trials and tribulations of the European economy are well known, and U.S. and Japanese growth remain highly constrained,” Basu said. “Still, some of the increases in materials prices were quite large last month, including in categories such as fabricated structural metal products and steel mill products. Over the past year, materials prices are up just 1.6 percent but roughly three quarters of that is explained by the last month alone.

“There is precedent for this type of counter-intuitive response,” said Basu. “Many construction industry participants will remember early 2008, a period during which the global economy was decelerating and materials prices were surging. There are likely some parallels between that period and our current economic situation.

“With investors becoming increasingly jittery about events in Europe, the Middle East and the United States, more money may be pouring into the commodity segments and less into stocks and bonds,” Basu said. “Policy announcements, including the latest word from the Federal Reserve on a third quantitative easing proposal, may accelerate the flow of money into commodities, resulting in higher prices in the absence of expanding global demand.

“We may be in a period during which materials prices are set to increase, despite a lack of robust economic growth,” said Basu. “Under various scenarios, financial markets could exhibit significant volatility going forward, causing some investors to place additional funds into hard assets like steel, oil, and copper. This would not be supportive of a construction spending recovery as projects become more expensive.”