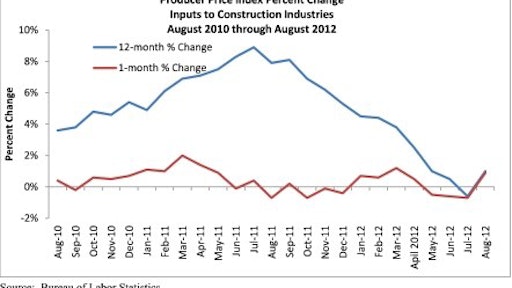 The nation's construction materials prices increased for the first time in four months, rising 0.9% in August and 1% year over year.

“Today’s report should generally be viewed negatively,” said Associated Builders and Contractors Chief Economist Anirban Basu. “All things being equal, one would expect prices to remain well behaved at a time of slow economic growth, both domestically and abroad.

“From a construction viewpoint, rising materials prices render construction service delivery more expensive, which carries over to higher project cost estimates, less projected revenue and less likely that an individual project will acquire adequate financing," said Basu. “On the other hand, from a multi-month perspective, materials prices are only up 1 percent during the past year, a welcome respite from previous years when materials prices had been incredibly volatile.

“August may prove to be a bit of an aberration for a number of reasons, including the unusually large increase in crude energy prices,” Basu said. “Conventional wisdom suggests that oil and other commodity prices have been rising for reasons that have little to do with underlying economic performance and more to do with geopolitics, meteorological forces and shifting global investment allocations.

“Given the recent uptick in unsettling geopolitical activity, oil prices could become even more volatile, which tends to drive materials prices higher overall,” said Basu. “However, the pace of economic growth around the world, and the level of demand for construction materials, suggests construction materials prices are likely to remain reasonably stable for the foreseeable future absent a major geopolitical event.”