Construction materials prices declined 0.7% in July 2012 and have dropped year-over-year for the first time since November 2009 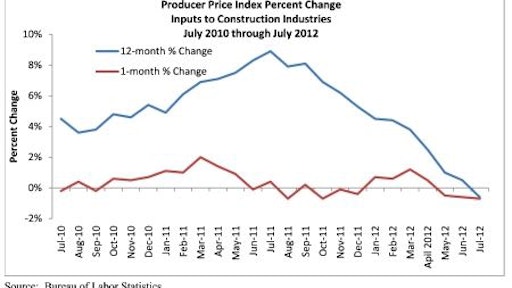 The July 2012 Producer Price Index shows three straight months of construction-input price decline and a drop in prices over- July 2011.

“While it is true that last month’s decline in materials prices is a reflection of a still-sluggish economic environment, there are reasons for growing optimism,” said Basu. “For example, much of the economy’s lackluster performance can be attributed to ongoing uncertainty emerging from Washington, D.C., including the looming fiscal cliff. If Congress acts soon to create greater certainty around federal budgetary and taxation issues, the level of business certainty would increase meaningfully. That would result in the availability of more risk-seeking capital to finance projects.

“Anecdotal and survey information indicate that bankers are becoming more aggressive in their lending,” Basu said. “Lower and more stable materials prices are associated with less risky construction, and permanent loans and are more likely to attract capital to construction projects. This means that for the first time in several months, more robust recovery in nonresidential construction spending is conceivable. However, Congress and the administration still must act appropriately before capital becomes sufficiently risk-seeking.”