February’s decline brought the measure of initial reports for nonresidential building projects to 116.5, but the figure was nearly 20% above February 2013 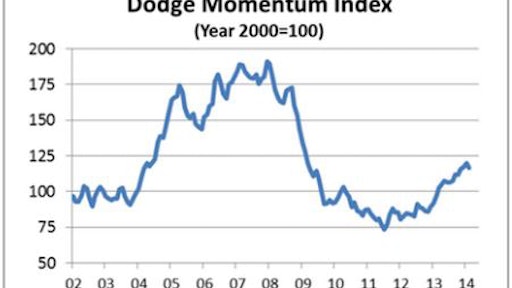 The February 2014 Momentum-Index retreat is expected to be a brief pause, caused by weak employment growth in December and January, in a broader upward trend.

The Dodge Momentum Index slipped 2.6% in February compared to the previous month, according to McGraw Hill Construction. February’s decline brought the Momentum Index to 116.5 (2000 = 100), down from January’s revised 119.7 but still nearly 20% above the year-earlier (February 2013) reading of 97.4.

The latest month’s retreat is expected to be a brief pause in a broader upward trend. Weak employment growth in December and January raised concern that the U.S. economic expansion was losing momentum, dampening the planning environment for commercial and institutional buildings. The moderate improvement in the February jobs report should help alleviate some of that concern going forward..

The February Momentum Index saw contraction in both its main components. New plans for commercial buildings, usually the more cyclically sensitive sector, dropped 1.7% while institutional building fell back by 3.7%.

On the commercial side, declines were reported across all of the major building types. Even so, there were a number of new commercial projects that continued to make their way into the planning pipeline. February’s projects included the $160 million Three Alliance Office Building in Atlanta, GA, a $130 million expansion to the Burns & McDonnell Headquarters in Kansas City, MO, and an $80 million distribution center for ConAgra Foods in Frankfurt, IN.

The institutional component, meanwhile, was weighed down by a large downturn in education building plans. The education decline, however, was partially offset by an increase for new healthcare projects, including the $50 million Presbyterian Rust Cancer Center in Rio Rancho, NM, and the $50 million Jewish Home of Rochester in Rochester, NY.

"The implication is that while many contractors will continue to work through backlog for the balance of 2020, it may be difficult to secure work for 2021," says Anirban Basu, ABC's chief economist.
Associated Builders and Contractors Inc. (ABC)
August 12, 2020

As the AED Foundation (AEDF) continues to address the industry's skills gap through its Vision 2024 plan, the soon-to-launch Construction Career Aptitude Test aims to help address the workforce shortage starting at the high school level.
AED Foundation
August 4, 2020
Follow Us