New plans for commercial buildings fell 1.0%, as declines for offices and hotels offset an increase for retail buildings 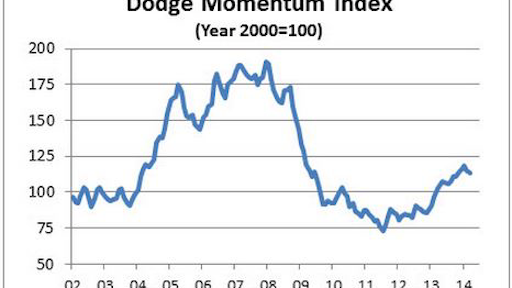 The Dodge Momentum Index retreated 0.8% in March compared to February, according to McGraw Hill Construction, a division of McGraw Hill Financial. The Momentum Index is a monthly measure of the first (or initial) report for nonresidential building projects in planning, which have been shown to lead construction spending for nonresidential buildings by a full year. The March Momentum Index came in at 113.8 (2000=100), down from a revised 114.8 in February and 118.3 in January. While the longer term trend is still viewed as positive, the Momentum Index appears to be experiencing a temporary pause. Uncertainty, perhaps related to the weak employment growth at the start of the year, is the likely contributor to this short-term unease.

Uncertainty weighed on both the commercial and institutional sides of the Momentum Index in March. New plans for commercial buildings fell 1.0%, as declines for offices and hotels offset an increase for retail buildings. Despite the pullback for offices, the most significant commercial building to enter the planning pipeline in March was the $250 million 6 Houston Center Office Building in Texas. New plans for institutional buildings dropped 0.7% in the latest month. A decline in the volume of education projects was only partially offset by the inclusion of two large amusement and healthcare-related developments – the $300 million E23 Casino and Hotel proposed in Albany NY and the $250 million Women and Children’s Hospital slated for Lakeland FL.

After two months of falling labor costs, the sub-index for current subcontractor labor indicates costs are on the rise
IHS Markit
June 24, 2020
Follow Us