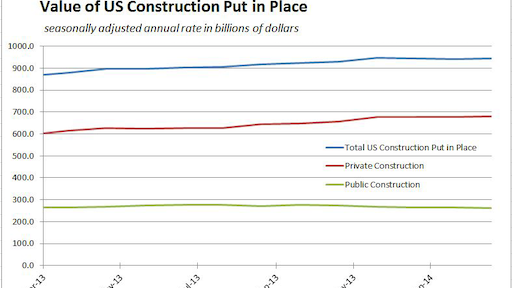 Private residential construction spending increased by 0.5% in March to reach the highest rate since November 2008. It topped the year-ago level by 16%. Single-family construction rose just 0.2% in March, but was 13% higher year-over-year.

Total construction spending remained in a holding pattern in March as strong gains in apartment construction and modest growth in homebuilding and private nonresidential activity offset falling public outlays, according to an analysis of new Census Bureau data by the Associated General Contractors of America (AGC). Association officials noted that the construction spending figures may get dramatically worse unless public officials act urgently to maintain federal highway funding.

“Overall construction spending has increased from a year ago but has stayed in a narrow range since December,” said Ken Simonson, the association's chief economist. “It is encouraging that spending remained level despite severe winter weather that may have delayed some projects, and the totals are likely to grow moving into spring.”

Construction put in place totaled $943 billion in March, 0.2 percent above the revised February total and matching the latest estimate for January. Spending in March was 8.4 percent higher than a year earlier.

Private nonresidential spending edged up 0.2 percent for the month and 8.6 percent over 12 months. Most major categories increased from year-ago levels. The largest private segment, power construction—comprising work on oil and gas fields and pipelines as well as electricity projects—rose 2.8 percent over the year. The fastest-growing private type was communication construction, with a 34 percent gain since March 2013.

Public construction spending declined 0.6 percent for the month and 0.8 percent year-over-year, sinking to its lowest mark since November 2006. The largest public segment, highway and street construction, increased 8.5 percent from a year before, but the second-biggest category, educational construction, slumped 5.3 percent.

“All of these trends are likely to continue,” Simonson predicted. “There appears to be plenty of demand for more apartments and many categories of private nonresidential construction. Single-family homebuilding should remain above year-ago levels, although growing much more slowly as the year progresses. Public construction is likely to shrink further, based on what has been proposed or enacted in federal and state budgets.”

Association officials cautioned that the recent increase in highway spending will reverse course if the federal Highway Trust Fund runs out of money this summer. The Trust Fund provides funding to every state to match state spending on highway and bridge repair and construction projects. If the Fund runs out of money, billions of dollars worth of construction projects are likely to be stalled.

“Unless Congress and the administration get together in the next few weeks on a funding plan, thousands of construction projects across the country may have to lay off workers in the height of the construction season,” said Stephen E. Sandherr, the association’s chief executive officer. “There is no time left for political posturing; construction workers and companies need immediate assurance that they will be paid on time for their work.”