Multifamily starts leapt nearly 40% in April to a rate not seen since 2006, while single-family starts inched up 0.8% 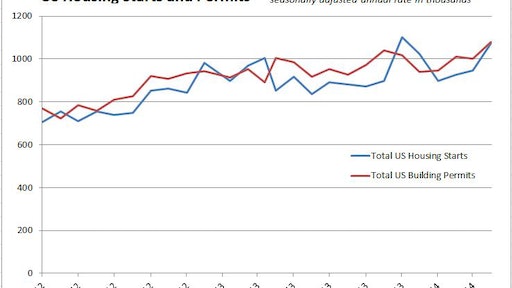 Soaring production of multifamily apartments pushed nationwide housing starts above the million-unit mark in April, according to newly released figures from the U.S. Department of Housing and Urban Development and the U.S. Census Bureau. Total housing production rose 13.2% for the month to a seasonally adjusted annual rate of 1.07 million units, due entirely to a 39.6% increase in multifamily starts. Single-family starts held steady.

“The flat single-family data confirm our latest surveys, which show that single-family builders remain concerned that tight credit availability and uncertain economic conditions are keeping potential buyers on the sidelines,” said Kevin Kelly, chairman of the National Association of Home Builders (NAHB) and a home builder and developer from Wilmington, Del. “However, demand for apartment construction still remains high.”

“The growth in multifamily production is a very positive development as it shows an expected increase in household formations from young people renting apartments and taking the first step into the housing market,” said NAHB Chief Economist David Crowe. “These young households will form the demand for ownership in the future.”

Issuance of building permits, which can be an indicator of future building activity, rose 8% to a seasonally adjusted annual rate of 1.08 million units in April. This was due entirely to an increase in the multifamily sector, where permits registered a 21.8% gain to 453,000 units. Single-family permits registered a marginal 0.3% gain to 602,000 units.

If you’re going to take the time and effort to bid for a state, local and education project, be sure to put your best foot forward.
Ben Vaught
Jan 22nd, 2021
Latest

Mafic is partnering with the University of Southampton in England to develop wearable technology for hard hats for improved safety and faster progress on projects.
Mafic Ltd.
Jan 22nd, 2021

If you’re going to take the time and effort to bid for a state, local and education project, be sure to put your best foot forward.
Ben Vaught
Jan 22nd, 2021

OSHA has issued guidelines, not standards, to protect workers from coronavirus infection, and the incoming administration plans to stiffen enforcement as well as requirements
Larry Stewart
Jan 18th, 2021

Skanska USA's Johana Godoy shares her experiences and career growth in the field of construction, as well as opportunities for other women seeking a promising and rewarding career path.
Becky Schultz
Jan 18th, 2021

[VIDEO] Why these are the most-read construction stories of the week, including each state DOT’s take from the COVID relief bill, three big prospects for 2021 construction, concrete company admits to antitrust, how calcium improves cold weather pours
Larry Stewart
Jan 15th, 2021

DroneDeploy survey finds demand for aerial laser scanning highest of all industries among contractors; more than half of construction users plan use drones for more than aerial maps
DroneDeploy
Jan 15th, 2021

This week, Jess & Dormie talk about how recruiting workers to the industry has changed as a result of COVID and share tips on how to retain your best workers. We also catch you up on the latest news and share your hard work during Build America Friday.
Jessica Lombardo
Jan 15th, 2021

The IGNITE Learning Lab is designed to help those planning to take the CEM and CESP exam develop knowledge of pertinent content, sort out what's covered, identify content areas of focus and increase their expertise in equipment management.
Association of Equipment Management Professionals (AEMP)
Jan 15th, 2021

Rather than New Year’s resolutions that add things to your already full plate, why not stop doing some things that are eating up your time and money?
Lonnie Fritz
Jan 14th, 2021
Business

Civil penalty amounts for OSHA violations are being increased based on cost-of-living adjustments for 2021.
Occupational Safety & Health Administration
Jan 13th, 2021
Follow Us