Slow inventory accumulation, big trade deficit and a plunge in private spending on nonresidential structures are expected to be temporary drags 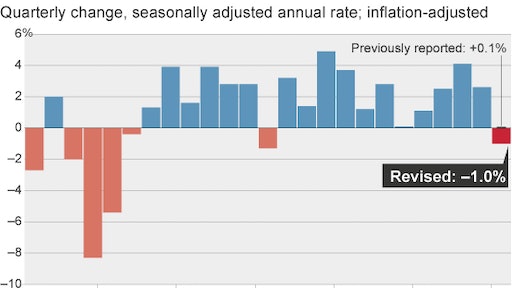 The U.S. Commerce Department on revised its estimate of first-quarter 2014 gross domestic product down to show the economy shrank at a 1.0% annual rate. It's the first GDP drop in three years, as it buckled under the weight of a severe winter, but there are signs activity has since rebounded.

The worst performance since the first quarter of 2011 reflected a far slower pace of inventory accumulation and a bigger than previously estimated trade deficit. Both are temporary factors which should fade and unleash a surge in growth this quarter.

“The race isn't over yet for the economy. We are still expecting a strong finish to the year. Inventory levels will rebuild, pushing GDP to nearly 4% in the second quarter,” said Chris Rupkey, chief financial economist at Bank of Tokyo-Mitsubishi UFJ in New York.

The decline also reflected a plunge in business spending on nonresidential structures. The economy grew at a 2.6 percent pace in the fourth quarter of 2013.

Economists estimate severe weather could have chopped off as much as 1.5 percentage points from GDP growth.

Construction Employment Rebounding in Many Parts of the U.S.

US Cement Use Continues in 2014 Despite Softening Economy