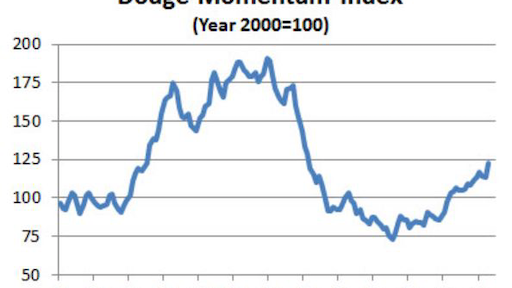 The Momentum Index had retreated in February and March, following the steady gains that were reported during most of 2013. With the April increase, the Momentum Index resumed its upward track, and is up 17.8 percent compared to the same month a year ago.

The Momentum Index retreated in February and March, following steady gains reported during most of 2013. With the April increase, the index resumed its climb, and is up 17.8 percent compared to the same month a year ago. A harsh winter helped slow overall economic growth in the first months of 2014, but prospects for commercial development are again improving as reflected by the growing volume of projects at the planning stage and strengthening market fundamentals such as occupancy rates and rents.

The April Momentum Index was bolstered by an upturn for both of its segments. Commercial was the stronger of the two components, climbing 12.1 percent from March. Among the larger commercial projects to enter planning in April were several office buildings and hotels – a $300 million headquarters for Toyota in Plano, Texas; a $260 million convention center hotel in Seattle, and a $200 million Waldorf Astoria hotel in Los Angeles.

US Cement Use Continues in 2014 Despite Softening Economy

Brad Humphrey and the Caterpillar experts talk about how construction contractors approach safety on the jobsite as contractors learn to balance and work in the “new normal.”
Caterpillar - Cat
June 30, 2020
Follow Us