Single-family housing is 'the biggest surprise' limiting construction in the first half of the year, countered by healthy multifamily housing 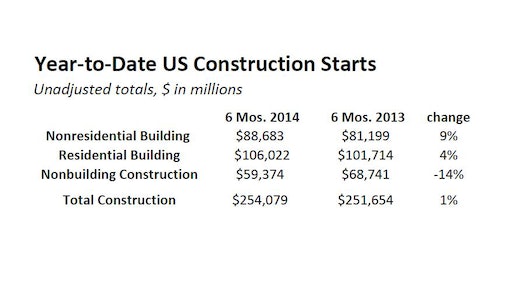 New construction starts in June advanced 6% to a seasonally adjusted annual rate of $549.7 billion, the highest level so far in 2014, according to McGraw Hill Construction.

Nonresidential building strengthened after pulling back in May, with the lift coming from the start of several large manufacturing-plant projects.  Modest gains in June were also reported for housing and nonbuilding construction (public works and electric utilities).  During the first six months of 2014, total construction starts on an unadjusted basis were $254.1 billion, up 1% from the same period a year ago.

“The first half of 2014 revealed a mixed performance by project type,” said Robert A. Murray, chief economist for McGraw Hill Construction.  “Single family housing stands out as the biggest surprise on the negative side, as its upward trend present for much of 2012 and 2013 has stalled for now. Public works and electric utilities are seeing generally decreased activity, as expected.

“On the positive side, multifamily housing is still proceeding at a healthy clip, and commercial building continues to move hesitantly upward, with office construction this year providing most of the support,” Murray added. “Manufacturing-related construction surged in the first half of 2014, boosted by the start of several massive chemical plants and refineries, while the institutional building sector is still trying to make the transition from lengthy decline to modest growth.

Nonresidential building in June climbed 12% to $214.9 billion (annual rate), after slipping 4% in May.  The increase came as the result of an exceptional volume of manufacturing projects in June, led by the start of a $3.0 billion polyethylene plant in Texas.  Other large manufacturing projects that were reported as June starts included a $396 million nitrogen plant expansion in Louisiana and a $375 million refinery expansion in Montana.  If the volatile manufacturing category is excluded, nonresidential building in June would be down 11% after a 22% gain in May.

The commercial building sector in particular retreated in the latest month, sliding 27% after soaring 33% in May.  Office construction dropped 49% in June following a robust May that included $2.3 billion for the office portion of the new Apple Inc. headquarters in Cupertino, Calif. June still featured the start of several large office projects, such as a $146 million office tower in Chicago, Ill., and a $143 million office tower in Philadelphia, Penn.  Hotel construction also pulled back in June, dropping 25% after a strong May, although the latest month did include $92 million for two convention center hotels in Boston, Mass.

Stores and warehouses, which were sluggish during much of the first half of 2014, advanced 5% and 15% respectively in June.  The largest store project entered as a June construction start was a $138 million shopping center in Redlands, Calif.

The institutional side of the nonresidential market improved 3% in June.  The healthcare facilities category, which generally weakened in early 2014, increased 36% in June as the result of groundbreaking for a $900 million hospital campus in San Francisco, Calif.  The amusement category also posted a sharp June gain, soaring 62% with the support of a $375 million arena in Las Vegas, Nev.  In contrast, the educational building category in June receded 10%, settling back from previous improvement.  Even so, the latest month did include the start of several noteworthy public school construction projects, including a $104 million renovation of a high school in Washington, D.C., a $94 million high school in Severna Park, Md., and a $68 million middle school in Lynn, Mass.  The other institutional categories witnessed decreased activity in June – churches, down 10%; transportation terminals, down 38%; and public buildings, down 56%.

During the first six months of 2014, nonresidential building increased 9% compared to a year ago.  The manufacturing plant category soared 84%, reflecting groundbreaking for several very large chemical plants and refineries, such as what took place in June.  The commercial categories grew 3% year-to-date, with offices construction up 23% as its recovery seems to be finally gaining traction.

Over the January-to-June period, the top five office markets ranked by the dollar amount of new construction starts were:

The year-to-date statistics showed a slight gain for hotels, up 1%; but declines for warehouses, down 3%; and stores, down 11%.  Institutional building in the January-to-June period was able to edge up 1%, providing some evidence that its lengthy decline has reached an end.  Most notable was a 6% gain for the educational building category, supported especially by an 18% increase for K-12 facilities.  However, the other major institutional category, healthcare facilities, fell 5% year-to-date.

Single family housing in June slipped 2% from May, continuing the essentially flat pattern that emerged towards the end of 2013 and has carried over into 2014.  Murray noted, “The cost of financing stayed low in June, as the 30-year fixed mortgage rate finished the month at 4.1%, but strict bank lending standards continue to make it hard for first-time homebuyers to enter the market, at a time when investor demand for single family homes is waning.”

At the six-month mark of 2014, residential building in dollar terms was up 4% from a year ago, a much smaller gain than the annual increases that were reported in 2012 (up 31%) and 2013 (up 26%).  Single family housing year-to-date was up only 1%, which reflected this pattern by the five major regions of the U.S:

Multifamily housing advanced 16% year-to-date, not as large as the 24% hike for the full year 2013, but still in the double-digit range.  The top five multifamily markets ranked by the dollar amount of new construction starts in the first half of 2014 were:

Nonbuilding construction in June increased 2% to $120.5 billion (annual rate).  New electric utility starts were up 26% for the month, strengthening from a weak May, although still in line with the downward trend for this project type that’s been underway over the past year.

The public works sector overall weakened 1% in June, due to declines for two categories.  Bridge construction fell 12% relative to May which had been lifted by substantial bridge projects in New York and Kentucky, while miscellaneous public works plunged 28%.

The water supply category was helped in particular by the June start of a $108 million water treatment plant in San Antonio, Texas.

For the first six months of 2014, nonbuilding construction dropped 14% compared to last year.  New electric utility starts were down 23%, as the pullback from the 2012 record high continues.  Public works construction overall fell 12% year-to-date, with reduced activity across most of the project types.

On the transportation side, highways and bridges posted year-to-date declines of 17% and 12%, respectively.  The retreat for bridge construction will get steeper as 2014 proceeds, given the comparison to the second half of 2013 that included the start of several massive bridge projects, including the Tappan Zee Bridge replacement project in New York.

The top five states for highway and bridge construction during the first half of 2014 were:

States ranking six through ten in the January-to-June period were:

The miscellaneous public works category in the first half of 2014 dropped 11%, given a weak amount of new pipeline projects that reached the construction start stage.  Environmental public-works categories year-to-date were mixed, including a steep 17% slide for water supply systems, a modest 1% dip for sewer construction, and a 3% gain for river/harbor development.  Murray added, “The public works sector is facing several near-term negatives, including the need for Congress to shore up the Highway Trust Fund this summer and come up with a replacement for the MAP-21 legislation set to expire at the end of September.  A successor bill to MAP-21 which is more than just a status quo extension will probably have to wait until after the November 2014 elections.”

The 1% gain for total construction starts at the U.S. level during the first six months of 2014 came from a varied pattern by geography.  Growth relative to the same period a year ago was reported in the South Central, up 9%; and the Northeast, up 5%.  The South Central’s increase reflected widespread construction strength in Texas as well as the boost coming from the start of several massive chemical and refinery plants in that region.  The increase in the Northeast reflected the brisk pace being reported for new multifamily construction.  The West on a year-to-date basis was unchanged from 2013, while weaker activity was reported in the Midwest, down 2%; and the South Atlantic, down 5%.