First decline in four months of the measure of nonresidential building planning erases two months worth of gains, but index remains 16.5% above July 2013 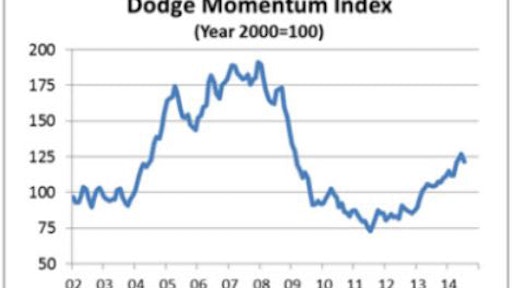 The Dodge Momentum Index lost gains of the last two months, falling 4.4% in July to 121.4 (2000=100). It’s the Index’s first decline in four months, according to McGraw Hill Construction.

Despite the July stumble, the Momentum Index remains 16.5% higher than a year earlier.

July’s decline in the Momentum Index was the result of a 6.8% drop in commercial building plans, while the institutional sector fell a milder 0.6%.

More Economists Fear Housing Could Become a Drag on Economy