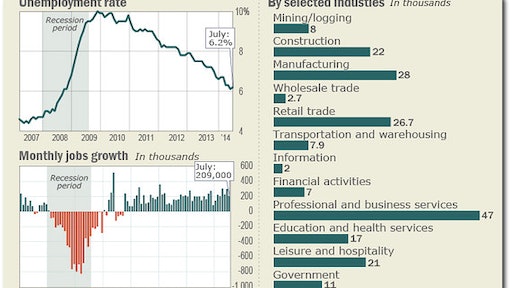 Although the economy gained jobs, the unemployment rate edged up to 6.2% from 6.1%, meanwhile, as more people entered the labor force in search of work, the government reported Friday. Economists surveyed by MarketWatch had expected an increase of 235,000 nonfarm jobs. In July, every major industry added jobs. Professional services hired 47,000 workers, construction companies added 22,000 positions and manufacturers boosted payrolls by 28,000. Average hourly wages, however, only rose 1 cent to $24.45, the smallest gain in three months. Over the past year hourly wages have climbed 2%, the same as in the prior month. The average workweek was unchanged at 34.5 hours. The labor-force participation rate climbed a tick to 62.9%, the first increase in four months. Employment gains for June and May were revised up by a combined 15,000, the Labor Department said. The government said the 298,000 new jobs were created in June, up from a preliminary 288,000. May's gain was revised to 229,000 from 224,000. So far in 2014 the economy has gained an average of 230,000 jobs a month, up 19% from the 2013 pace of 194,000.