'The lack of monthly construction employment growth, particularly in the nonresidential sector, is troubling' 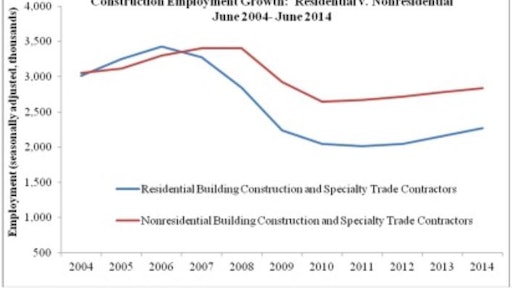 The U.S. construction industry added 6,000 jobs in June, according to the Bureau of Labor Statistics (BLS) July 3 report; however, nonresidential construction added only 700 of those jobs and the heavy and civil engineering sector lost 700 jobs.

“Although nonresidential construction’s performance is somewhat disappointing, the general tenor of today’s employment report is upbeat. It is worth noting that nonresidential construction tends to lag that of the overall economy,” said Associated Builders and Contractors Chief Economist Anirban Basu. “Today’s jobs number are largely of a reflection of the softer growth recorded by the U.S. economy for much of last year and during the initial months of 2014.

“Given that the economy added over 200,000 jobs for the fifth consecutive month in June, there is some optimism about improvement in the second quarter; however, the lack of monthly construction employment growth, particularly in the nonresidential sector, is troubling.” said Basu.

“Although the national construction unemployment rate stands at 8.2 percent on a non-seasonally adjusted basis, there are parts of the nation in which unemployment is far lower,” Basu said. “In fact, there are emerging shortages of industrial construction workers in growing segments of the south, which will trigger large increases in wages and per diems during the year ahead. By contrast, there are communities in which construction unemployment remains well above the 8.2 percent average, suggesting that wage inflation will only be meaningfully experienced in certain communities.”

According to the BLS household survey, the national unemployment rate fell to 6.1 percent in June, reaching its lowest level since September 2008. The civilian labor force expanded by 81,000 in June.