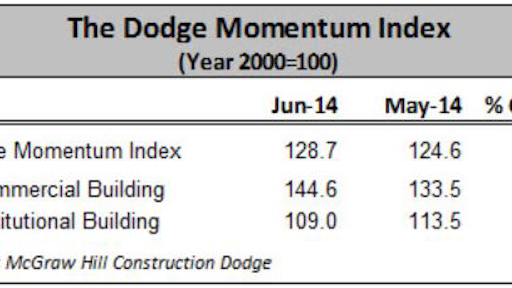 The Dodge Momentum Index gained 3.3% in June to 128.7 (2000=100), its third consecutive monthly increase following hesitation in February and March, according to McGraw Hill Construction.

McGraw Hill says the Momentum Index appears to be recovering from the weather-induced softness early in the year. Aided by this recent strengthening, the Momentum Index was a healthy 22.6% higher in June than a year earlier. Moreover, the growing volume of projects at the planning stage suggests that nonresidential construction starts should be headed higher over the remainder of the year.

This month’s increase in the Momentum Index was the result of a 8.3% surge in commercial building plans. Five commercial projects valued at $100 million or more entered planning in June to support the increase. These include the $250 million Kroger Distribution facility in Forest Park, Ga., the $200 million Skyplex Retail and Entertainment Complex in Orlando, Fla., a $200 million hotel at the Maryland Live Casino location in Hanover, Md., a $100 million warehouse at the LogistiCenter in Logan, N.J., and the $100 million retail portion of The Haven Outlet Shops in West Haven Ct.

Call Off the US Housing-Bubble Alert

The Foundation has adapted to continue to fit the needs of students and schools across the US to help students graduate from AEDF's recognized high school programs.
Associated Equipment Distributors
July 15, 2020

2020 Marcum National Construction Survey reflects a positive outlook by respondents about the current and future state of the industry
July 15, 2020
Labor & Workforce Development

Jay Denton assesses the trends in construction employment leading up to the pandemic and how things have changed.
July 9, 2020
Follow Us