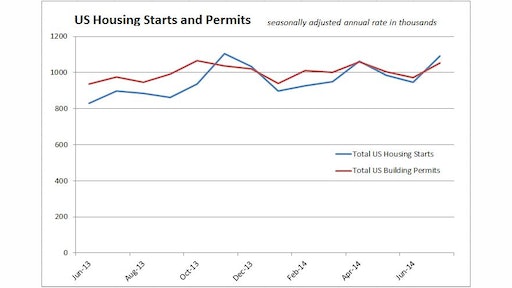 U.S. housing starts and permits both returned in July to annual rates above a million units.

Fueled by strong single- and multifamily growth, nationwide housing starts rose 15.7% to a seasonally adjusted annual rate of 1.093 million units in July, the highest level since November 2013, according to newly released figures from the U.S. Department of Housing and Urban Development and the U.S. Census Bureau.

“A return to production levels over one million confirms that consumer confidence continues to improve,” said Kevin Kelly, chairman of the National Association of Home Builders (NAHB) and a home builder and developer from Wilmington, Del. “Propelled by a healthier economy, more and more people are feeling ready to buy a home.”

Regionally in July, combined single- and multifamily housing production rose in the Northeast, South and West, with respective gains of 44%, 29% and 18.6%. Total production fell by 24.8% in the Midwest from an unusually high June level.

“July’s increase in starts combined with rising builder sentiment proves that June’s production dip was more of an anomaly than a reversal of the market,” said NAHB Chief Economist David Crowe. “We should continue to see a gradual, consistent recovery throughout the rest of the year.”

Issuance of building permits registered an 8.1% increase to a seasonally adjusted annual rate of 1.052 million units in July. Multifamily permits rose 21.5% to 412,000 units while single-family permits increased by 0.9% to 640,000 units.