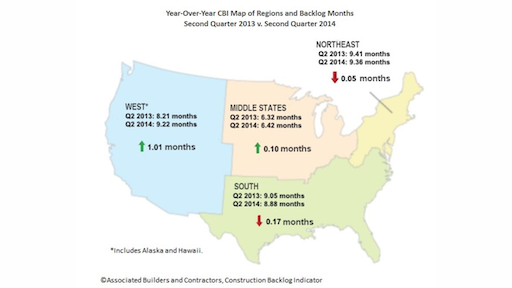 Average backlog lengthened in three of the four regions during the second quarter with the South as the only region that experienced a decline.

"The long-awaited brisk nonresidential construction recovery may be upon us," said Associated Builders and Contractors (ABC) Chief Economist Anirban Basu. "Industry momentum was snuffed out by a seemingly endless winter, but the pace of industry recovery has been accelerating ever since. Backlog gains were nearly ubiquitous during the second quarter, with gains registered in every industry segment, in nearly all geographies and for firms of virtually all sizes.

"Further increases in construction backlog are likely given remarkably accommodative Federal Reserve policy even after five completed years of economic expansion, accelerated job growth and rising consumer confidence," said Basu. "The nation has added roughly 2.5 million jobs over the past year, consistent with growing demand for space. Financing conditions have also improved, which should set the stage for more rapid nonresidential construction recovery in a number of key construction segments, including office (classified within commercial/institutional) and manufacturing (classified within heavy industrial) segments."

Average backlog lengthened in three of the four regions during the second quarter with the South as the only region that experienced a decline. The Northeast now has the longest backlog in the country—which can partially be attributed to recoveries in Massachusetts and New York—after gaining more than a month of backlog in the first quarter. The West, which has recently added the highest proportion of high-wage jobs in the nation and is powered by markets like San Jose and Seattle, experienced the largest growth in backlog over the past year, improving by more than a month to its longest backlog in the history of CBI. The Middle States region reached its highest level since the end of 2012 and, with energy and industrial production moving higher, the stage is set for more rapid backlog recovery going forward.

Backlog expanded among all industry segments during the second quarter and all categories also experienced year-over-year increases, with the exception infrastructure, where public budgets and gridlock in Washington, D.C., continue to produce choppy recovery in public capital spending.  After falling in the first quarter, backlog in the commercial/institutional category rebounded to 8.9 months, near its historic high. Improving financing conditions and economic momentum should continue to spur growth in office buildings, shopping malls, hotels and casinos. Backlog in the heavy industrial category is at its highest level since the fourth quarter of 2012 and should also continue to improve as expected growth in pipeline construction and other energy-related segments sets the stage for the quarters ahead.

All firm categories enjoyed advancing backlog with the exception of the largest firm category ($100 million+ annual revenue) where firms registered a loss of half a month in backlog during the second quarter. Industry recovery has broadened to include more small firms, with backlog rising in both the ‘revenue less than $30 million’ and ‘$30-50 million’ categories. Backlog among larger firms with between $50 and $100 million in revenue is the lengthiest at more than 11 months, with many firms now reporting more than a full year of work already under contract. These firms appear to be in the proverbial sweet spot; they are less likely to be impacted by a softening of activity in large-scale infrastructure and likely to have access to the growing number of large commercial projects now underway in various parts of the country.

Survey shows construction activity is returning to pre-coronavirus levels in many parts of the country and some firms are beginning to add workers
Associated General Contractors of America
June 19, 2020