Forecast: US Construction Starts Approaching $700B by 2018 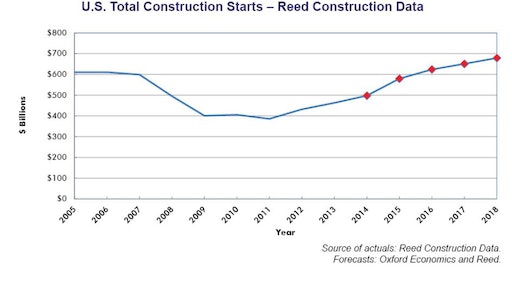 Much of the U.S. construction outlook begins with housing starts. Nation-wide, monthly multi-family groundbreakings have pretty much recovered to their pre-recession volume (400,000 units annualized). It’s the single-family market that continues to hold back.

Single-family starts are only about half of what might be expected (600,000 units annualized versus 1.2 million), based on their history. Prospective buyers remain wary. The precipitous drop in home prices, extending through several years after the sub-prime mortgage mess came to light, combined with myriad wrenching foreclosures, have left scars that are taking a long time to heal.

Single-family housing starts have been so far below their normal level for so long, finding an outlet for the pent-up demand is becoming critical.

Strangely enough, it may be an increase in interest rates that will release the steam. It’s happened before. Buyers take low rates for granted and feel no urgency to act. Once they see yields starting to move higher, they are compelled to enter the market quickly, before the next round of hikes.

The Federal Reserve is expected to wind up its bond-buying program by this October and to begin applying the screws to interest rates by the summer of 2015 at the latest.

A marked improvement in housing starts has dramatic implications for the whole economy. The front-line effects are on building material sales.

Reed’s latest residential starts projections, when graphed, show a consistent trend upwards that will raise their dollar volume to about $300 billion by the forecast-period’s end in 2018.

The actual dollar volume of commercial construction starts so far this year has been uninspiring, -14.5 percent. The biggest sub-category, retail, is -8.1 percent. Hotel and motel work is also notably weak, -48.8 percent.

Both are set for cyclical turnarounds. The U.S. initial jobless claims figure for the latest week, ending July 19, was among the lowest ever, only 284,000. Employment growth is on a tear, averaging over 200,000-plus jobs per month through June. July’s figure, when released, is also likely to be impressive.

More and better jobs, plus higher incomes, all translate to greater spending on essentials and such extras as entertainment (restaurant meals, travel, etc.) and self-improvement (more stylish clothes, cosmetics, etc.).

Tower construction will be driven higher by gains in office-based employment and a decline in the “cap” rate (i.e., the annual net income from a leasable property expressed as a percent of its asset value.)

The higher asset valuations that are reducing the cap rate are gradually causing a pendulum swing from a “buy” decision to a “build” choice among owners contemplating new investments on alternate or additional facilities.

Industrial construction is another category of starts with improving prospects. Whether in terms of input costs (e.g., natural gas in plastics), transportation costs or heating/cooling costs, American manufacturers are gaining a competitive advantage versus many foreign enterprises from the shale-gas and tight-oil development-surges underway in North Dakota, Texas and several other locations around the country.

U.S. firms are also bringing home some of the jobs (and related investments) they previously outsourced to other countries. Growing labor movements in the likes of China, Bangladesh and Thailand are lowering the weekly number-of-hours-worked, inspiring greater work-place safety regulations and raising pay-scales overseas.

Institutional and infrastructure construction spending will kick into a higher gear as well. Year-over-year population growth of 0.7 percent may not sound that buoyant, but it lifts the national census count by 2.2 million individuals annually. This has ripple effects on the need for physical structures – schools, hospitals, fire halls, police stations, roads and highways.

For a long time, finding the money needed to proceed with such projects has been the issue. Government coffers were constrained by many of the same factors (weak business activity and a credit crunch) that were placing a choke-hold on family finances.

As the economy regains its strength, the public purse is putting on weight again, largely through self-correcting measures. Washington may continue to display the dysfunctional tendencies that hamper the capital spending programs it funds, but states and municipalities will benefit from faster flowing streams of sales, income and property taxes. Besides, fewer people on the unemployment roster will free up cash to be spent in areas other than social services.

Finally, there are the capital expansions taking place in America’s booming energy sector. This will add icing to the construction-spending cake.

For Canada, an improving U.S. construction scene will send some of its froth over the border.

There is evidence that material costs are increasing faster south of the border than to the north. In the previous Economy at a Glance, the average year-over-year material cost increase for the 20 largest U.S. cities was +3.8 percent. For Canada’s 10 largest urban centers, the comparable figure was +1.7 percent.

Canadian contractors and owners should prepare themselves for a jolt, especially with respect to goods they import, given that the “loonie” (93 cents U.S.) is currently residing below the value of the greenback.

There are lots of risks to the foregoing. The Middle East is a powder keg. President Putin may take his Ukraine and other expansionist ambitions one step too far. China’s “shadow” banking system may lead that nation down a credit-crisis rabbit hole. Mother Nature may demonstrate once again, somewhere on the globe, how nasty she can be when cranky.

But there’s always something to be worried about. There’s an old saying in the economics profession: the present is always a terrible time to have to make a forecast.

That’s probably true now in about as equal measure as it has ever been.

The number of female CEOs in science and technology industries, including construction, falls far below that of their male counterparts, while pay levels continue to reflect ongoing disparity between genders.
Becky Schultz
February 17, 2021
Follow Us