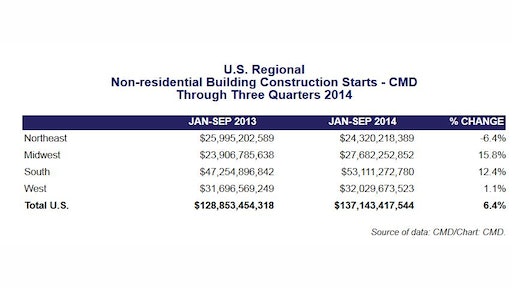 Nonresidential construction starts in the Midwest saw a jump of 15.8 percent while the South saw a 12.4 percent increase. Small declines were experienced in the Northeast (6.4 percent decline) and the West (1.1 percent decline).

All four geographic regions experienced increases in heavy engineering and civil construction starts. The West had the biggest increase at 21.9 percent followed by the South with 12.6 percent, the Midwest with 4.6 percent and the Northeast with 3.4 percent.

The Midwest region currently has the lowest unemployment rate of the four regions at 5.7 percent. Unemployment in the Northeast is at 6.1 percent followed by the South at 6.2 percent and the West at 6.5 percent.

On the opposite end of the scall, the East South Central sub-region - which includes the states of Alabama, Kentucky, Mississippi and Tennessee - has recorded the highest current unemployment rate at 7 percent followed by the Pacific (Alaska, California, Hawaii, Oregon and Washington) at 6.9 percent and the South Atlantic (Delaware, D.C., Florida, Georgia, Maryland, North Carolina, South Carolina, Virginia and West Virginia) at 6.5 percent.