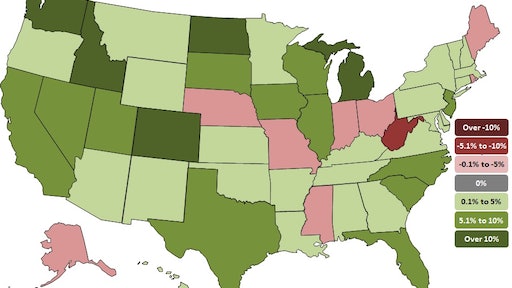 “While the year-over-year data remains relatively positive, it is troubling to see so many states losing construction jobs during the past month,” said Ken Simonson, AGC’s chief economist. “As energy firms cancel or delay projects and Congressional action on transportation and other infrastructure measures remains stalled, many construction firms appear to be reducing headcount, at least temporarily.”

Even as construction firms added jobs in 41 states between March 2014 and March 2015, construction employment declined in 29 states and the District of Columbia between February and March, according to an analysis of Labor Department data by the Associated General Contractors of America. Association officials cautioned that ongoing D.C. gridlock over how to pay for needed infrastructure improvements and declining demand for oil-related projects likely contributed to so many states shedding construction jobs last month.

“While the year-over-year data remains relatively positive, it is troubling to see so many states losing construction jobs during the past month,” said Ken Simonson, the association’s chief economist. “As energy firms cancel or delay projects and Congressional action on transportation and other infrastructure measures remains stalled, many construction firms appear to be reducing headcount, at least temporarily.”

Nineteen states added construction jobs during the past month, while construction employment was unchanged in Maine and Montana. California (7,300 jobs, 1 percent) added the most jobs, followed by:

Association officials said the industry’s recovery was at risk amid weakening demand and urged Congress and the Obama administration to act quickly to figure out a way to pay for and pass legislation to repair aging roads, bridges and transit systems, as well as other public infrastructure.

California-based DroneDeploy gets a cash infusion to expand its business.
DroneDeploy
February 9, 2021

December construction employment was only 3% below the pre-pandemic peak in February 2020, compared to overall nonfarm payroll employment, which was down 6.5%
Associated Builders and Contractors Inc. (ABC)
February 8, 2021
Follow Us