June's positive job numbers were a welcome sight among the trend of softening job growth, but the acceleration in job creation my not last 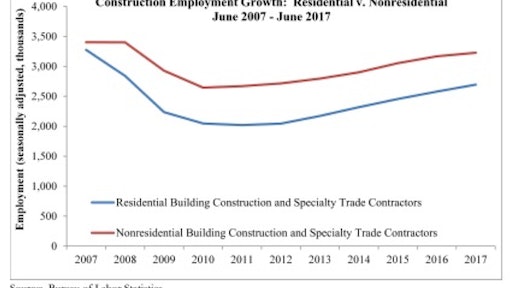 Overall construction employment expanded 3.1% on a year-over-year basis while adding 16,000 jobs for the month of June 2017.
Associated Builders and Contractors

National construction employment added 16,000 net new jobs on a seasonally adjusted basis in June, according to an Associated Builders and Contractors (ABC) analysis of data from the U.S. Bureau of Labor Statistics. Overall, construction employment expanded 3.1% on a year-over-year basis, easily outpacing the year-over-year growth rate of 1.6% for all nonfarm industries.

The nonresidential construction sector added 10,300 net new jobs in June after adding 4,900 in May (revised upward from 4,400 jobs), while the residential sector added 6,000 net jobs for the month.

"The majority of construction job gains in June were in nonresidential construction, though performance within the nonresidential building and heavy/civil engineering segments was subdued," says ABC Chief Economist Anirban Basu.Associated Builders and Contractors

“This jobs report is just what the doctor ordered,” said ABC Chief Economist Anirban Basu. “June’s employment gains impressed along every dimension. In addition to a robust headline of 222,000 jobs created, the labor force participation rate ticked higher to 62.8% from 62.7% and the employment-to-population ratio edged higher to 60.1% from 60%. While the labor force participation rate is only a bit higher than it was a year ago, the employment-to-population ratio is up 0.5%. Idleness has been on the decline in America, at least based upon the latter measure.

Prior to June, the nation had failed to add 200,000 or more jobs in five of eight months. June was a welcome respite from an emerging trend of softening job growth. However, the acceleration in job creation may not last. Job gains in June were likely aided by high school and post-secondary graduations, resulting in a surge in new job seekers and more opportunities to fill available job openings. America continues to face structural shortfalls in skilled human capital, something that construction industry leaders know all too well.”