Construction backlog declined in all four major U.S. regions in July, standing at 8.5 nationally for the month 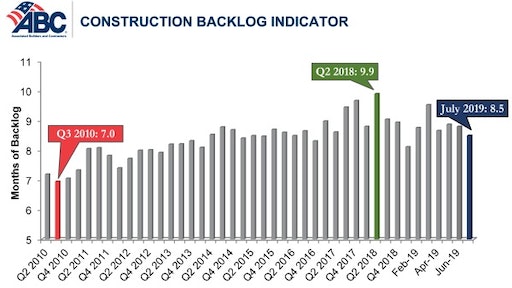 The ABC Construction Backlog Indicator is more than one month below its peak point in 2018, standing at 8.5 months.
Associated Builders and Contractors

“Construction backlog declined in all four major regions in July,” said ABC Chief Economist Anirban Basu. “While the Northeast and South — the regions with the lengthiest backlog — experienced minor dips, the West and the Middle States exhibited more significant declines. Despite the 9.3% monthly decline in the West region, backlog remains above levels observed in early 2019. For the Middle States, however, backlog is at its lowest level since the last quarter of 2015, largely due to a dip in activity in the commercial/institutional segment, the largest segment represented in ABC’s survey.

“Among the three industry subsegments measured by CBI, only the commercial/institutional category experienced a backlog decrease in July 2019,” said Basu. “Backlog in the heavy industrial category increased by 2.3 months and now stands at its highest level in the history of the CBI series. This is largely attributable to the energy sector, with particular strength apparent in the South. Regions tied to traditional manufacturing activities did not fare as well in July. 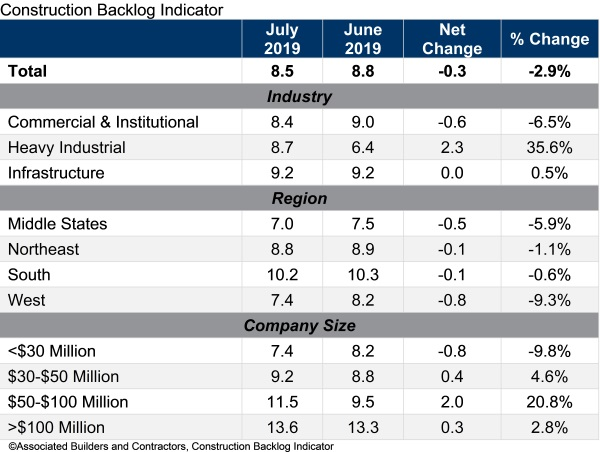 “Only companies with revenues lower than $30 million per year experienced shorter backlog in July,” said Basu. “This may be cause for concern since smaller firms tend to be more vulnerable to economic fluctuations. Much of the decline in backlog among this group occurred among those specializing in commercial construction.

“Despite the recent, albeit brief, losing streak, backlog levels remain consistent with healthy construction activity over the near-term,” said Basu. “Contractors collectively expect rising sales to continue and are planning to add to staffing levels, though their exuberance has been somewhat tempered in recent months. If the U.S. economy continues to soften, including in the nation’s manufacturing industry, contractor confidence levels will likely continue to subside along with backlog. Yet, for now, the nation’s nonresidential construction segment remains busy.”

Construction Backlog Rises to Nearly 9 Months in May