Construction Employment is on a Declining Trend 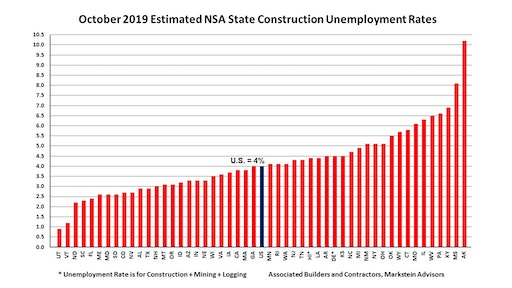 Despite employing 146,000 more workers nationally in October 2019 compared to October 2018, the national construction unemployment rate climbed to 4% during that same period.
Associated Builders and Contractors

In October, estimated not seasonally adjusted (NSA) construction unemployment rates increased nationally and in 34 states, fell in 13 states and were unchanged in three states on a year-over-year basis, according to an Associated Builders and Contractors (ABC) analysis of U.S. Bureau of Labor Statistics (BLS) data.

As of October 2019, the construction industry employed 146,000 more workers nationally compared to October 2018, even as national NSA construction unemployment rate climbed from 3.6% to 4% over the same period, according to BLS numbers. This continues the trend of declining growth in construction employment. October’s rise in year-over-year employment is the smallest increase since the January 2013 increase of 116,000.

“In October, above-average precipitation in the eastern half of the country while wildfires raged in parts of the west likely slowed construction activity and employment,” said Bernard M. Markstein, Ph.D., president and chief economist of Markstein Advisors, who conducted the analysis for ABC. “Also, below-average temperatures in the northwest quadrant of the country probably acted as a drag on construction in those areas.”

Because these industry-specific rates are not seasonally adjusted, national and state-level unemployment rates are best evaluated on a year-over-year basis. The monthly movement of rates still provides some information, although extra care must be used when drawing conclusions from these variations.

Two of these states — South Carolina and Utah — were in the top five in September. For the second month in a row, Utah had the lowest construction unemployment rate, which was also the state’s lowest October rate on record.

Vermont had the second lowest rate in October, up from 14th lowest in September (tied with New Hampshire). It was the state’s lowest October rate on record and the second largest year-over-year reduction (down 1.4%) in the country, behind Montana (down 2.1%).

North Dakota had the third lowest rate in October, a significant improvement over 30th lowest rate in September. The drop in the state’s construction unemployment rate appears to be largely due to unemployed construction workers leaving the state or dropping out of the workforce for the month. This was North Dakota’s lowest October rate since the 1.1% rate in 2015 and its third lowest October rate on record.

South Carolina had the fourth lowest rate in October. This is down from third lowest in September and tied with Colorado based on revised data (originally reported as tied with Alabama for fourth lowest rate). This was the state’s lowest October rate on record.

Florida had the fifth lowest rate in October, up from seventh lowest in September (tied with Maryland). This was the state’s second lowest October rate on record, behind the 2.2% rate in 2017.

South Dakota, which had the lowest rate in September (tied with Utah based on revised data, originally reported as the second lowest rate), fell to sixth lowest in October with a rate of 2.6%, tied with Maine and Maryland.

Colorado, which had the third lowest rate in September (tied with South Carolina), dropped to ninth lowest in October with a 2.7% rate, tied with Nevada.

Idaho, which had the fifth lowest rate in September based on revised data (originally reported as fourth lowest rate), declined to 16th lowest in with a 3.2% rate in October.

Alabama, which had the sixth lowest rate in September based on revised data (originally reported as tied with South Carolina for fourth lowest rate), declined to 11th lowest in October with a 2.9% rate, tied with Texas. Still, this was Alabama’s lowest October rate on record. 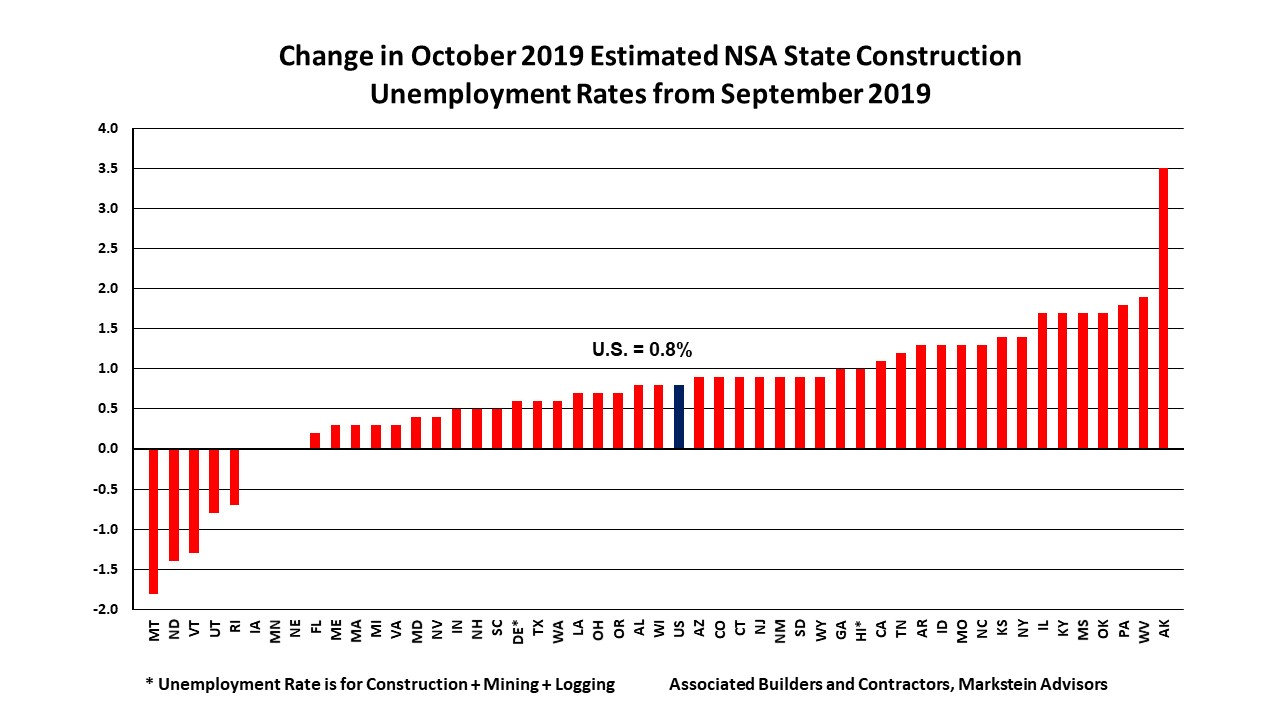 The states with the highest estimated NSA construction unemployment rates in order from lowest to highest were:

Three of these states — Alaska, Kentucky and Mississippi — were also in the bottom five in September. As in September, Alaska had the highest estimated construction unemployment rate in October. Nonetheless, after last year’s 8.5% rate, it was Alaska’s lowest October rate since reaching 8.4% in 2001. Not surprisingly, Alaska had the largest monthly increase among the states, up 3.5%.

Mississippi had the second highest rate in October, the same as in September. This marks seven months running that the state has had either the highest or second highest estimated construction unemployment rate.

For the second consecutive month, Kentucky had the third highest rate.

Pennsylvania had the fourth highest rate in October compared to sixth highest in September (tied with Missouri, Rhode Island and Wyoming).

West Virginia had the fifth highest rate in October compared to 10th highest in September (tied with Illinois and Michigan). The state had the second largest year-over-year and monthly increases among the states, up 1.8% and 1.9%, respectively.

Connecticut, which had the fourth highest rate in September (tied with Montana), improved to eighth highest in October with a 5.8% rate.

Meanwhile, Montana improved to 14th lowest with a 3.1% rate, tied with Oregon. Montana had the largest drop in its year-over-year and monthly rate in the nation, down 2.1% and 1.8%, respectively. This was also the state’s lowest October rate on record. 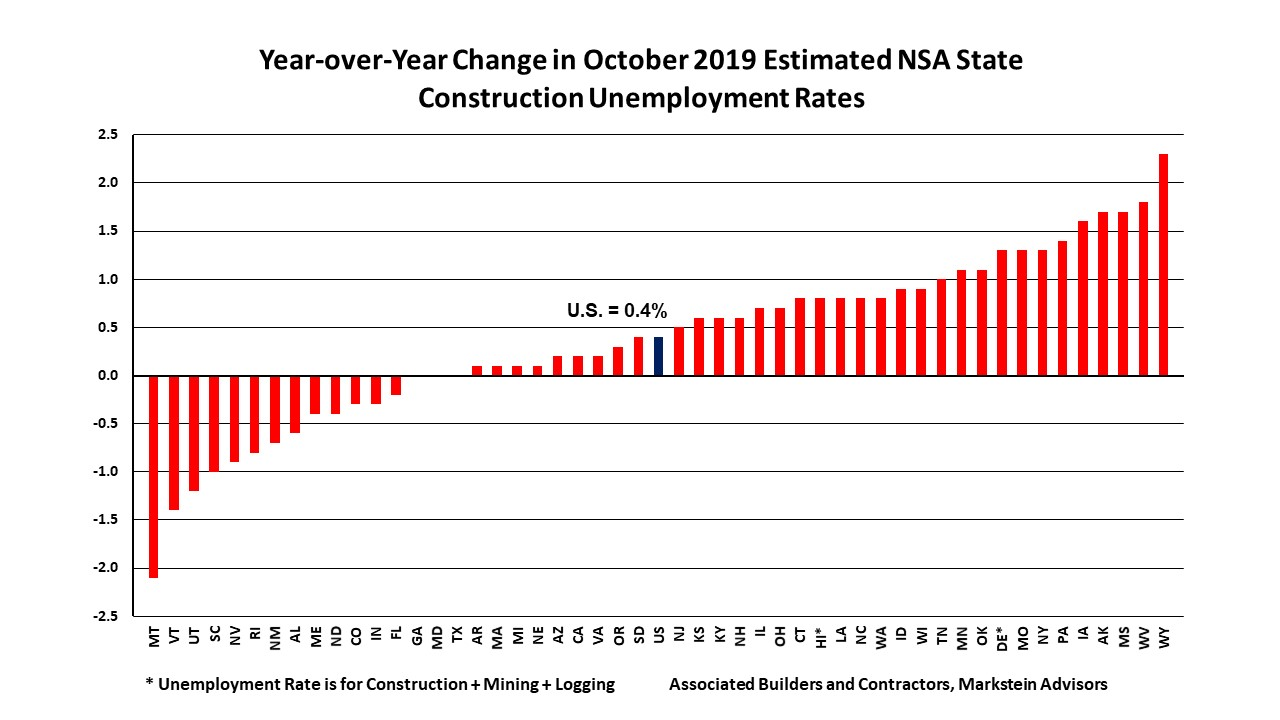