Nonresidential construction employment increased by 1,600 jobs for the month, but job growth in this segment will likely become uneven heading into 2020. 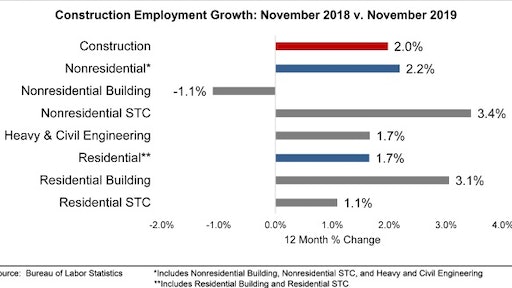 The construction industry added 1,000 net new jobs in November and ,on a year-over-year basis, has expanded by 146,000 jobs, an increase of 2%.
Associated Builders and Contractors

The construction industry added 1,000 net new jobs in November, according to an Associated Builders and Contractors (ABC) analysis of U.S. Bureau of Labor Statistics data. On a year-over-year basis, industry employment has expanded by 146,000 jobs, an increase of 2%.

Nonresidential construction employment increased by 1,600 jobs on net in November and is up by 98,600 net jobs over the last 12 months. Job gains were split between nonresidential specialty trade and heavy and civil engineering, both of which added 2,100 jobs. Nonresidential building lost 2,600 jobs last month and is down 9,100 jobs for the year.

“Any near-term recessionary fears during the summer have been neatly extinguished,” said ABC Chief Economist Anirban Basu. “While labor market data tend to be lagging indicators, it is clear that the U.S. economy retains plentiful momentum as it heads toward 2020. Today’s release also suggests that construction firms will continue to wrestle with profound skilled labor shortages as other industries offer plentiful employment opportunities and more construction workers retire.

“Despite ongoing challenges in recruitment, nonresidential construction added 1,600 jobs in November according to today’s release,” said Basu. “However, job growth within the segment has become uneven. Recent data regarding the level of investment in structures as well as spending in certain construction segments such as office and retail indicate some softening in private construction. On the other hand, public construction spending continues to be quite strong, fueled by healthy state and local government finances in much of the country. This coincides with the addition of 2,100 jobs in the heavy and civil engineering construction sector and elevated levels of backlog for contractors in the infrastructure category, according to ABC’s Construction Backlog Indicator.

“Few economists expected a recession to begin in 2019,” said Basu. “Those who did will ultimately have been proven incorrect. However, 2020 could be quite different given the rising levels of uncertainty facing various decision makers as the global economy weakens, trade wars persist, and next year’s elections approach.” 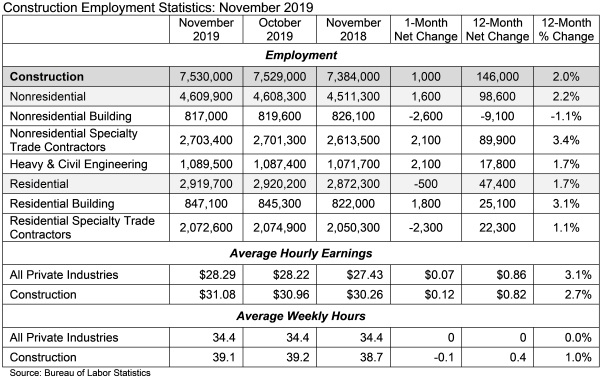