Construction Contractors Start 2020 on a Wave of Confidence

Seventy percent of contractors expect their sales to increase over the first half of 2020. 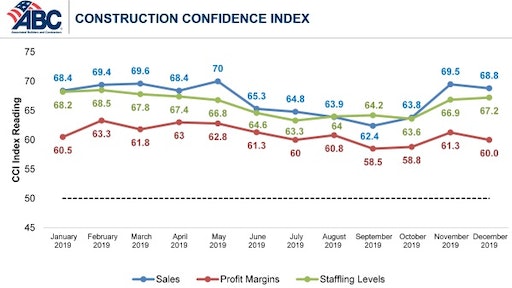 Sales expectations, profit margins and staffing levels all remained above the growth expectations threshold, indicating a strong start to 2020.
Associated Builders and Contractors

Confidence among U.S. construction industry leaders held steady in December 2019 after surging in November, according to the Associated Builders and Contractors (ABC) Construction Confidence Index (CCI). The average American contractor entered 2020 with confidence: sales expectations, profit margins and staffing levels all remained above the growth expectations threshold, indicating a strong start to 2020.

“The U.S. economy is humming, and among the principal beneficiaries of that performance are nonresidential contractors,” said ABC Chief Economist Anirban Basu. “Sales expectations, despite inching a bit lower in December, remain especially robust, with seven in 10 survey respondents expecting sales increases and fewer than one in 10 expecting their sales to decline during the first half of 2020. Recently released data regarding construction spending and hiring in the U.S. strongly suggest that this confidence is justified. ABC’s Construction Backlog Indicator dipped in December but still indicates that contractors remain busy.

“Despite broad optimism regarding sales prospects, contractors’ expectations are somewhat more subdued regarding profit margins,” said Basu. “Though materials prices have been generally stable and energy prices have declined recently, workers are becoming more expensive, both in terms of wages and benefits. Shortfalls in the skilled trades are apparent throughout the nation, especially in the booming markets of the South and West. With U.S. unemployment hovering near a 50-year low, many construction workers may find opportunities in other segments, including logistics, and retirement rates remain elevated. All of this translates into ongoing increases in compensation costs and a squeeze on margins.” 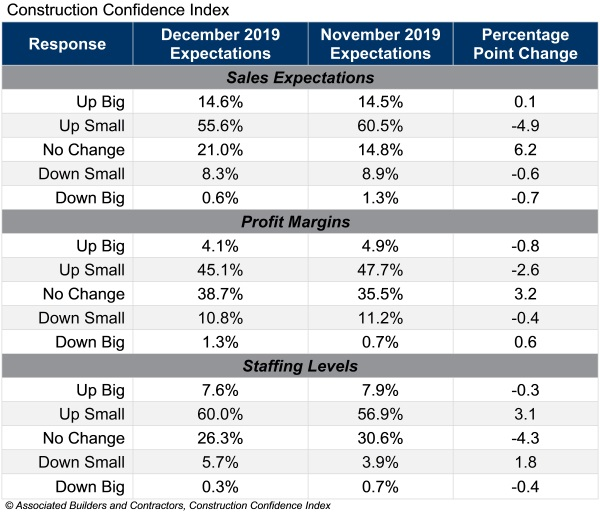