ABC finds that over half of contractors expect an increase in sales and staffing levels with expectations of continuous growth. 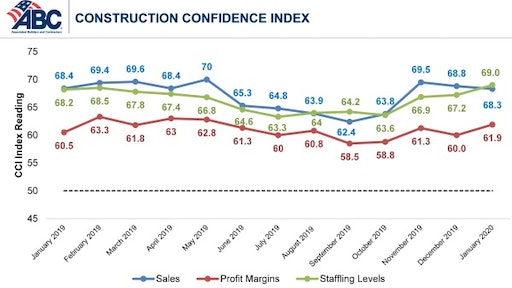 Confidence among U.S. construction industry leaders generally improved in January, consistent with the burgeoning momentum of the U.S. economy during the early weeks of 2020, according to the Associated Builders and Contractors Construction Confidence Index released today. While the reading for sales expectations edged lower for the month, confidence pertaining to sales, profit margins and staffing levels remain well above the threshold of 50, signaling expected growth in those three metrics.

“It’s no secret that much has transpired since January,” said ABC Chief Economist Anirban Basu. “At this moment, business confidence in America is ratcheting lower as travel, hospitality, entertainment and other segments of the economy are rocked by COVID-19. Interruptions to the global supply chain, a crash in oil prices and other phenomena are also putting more pressure on significant parts of the economy, which is likely already in recession. 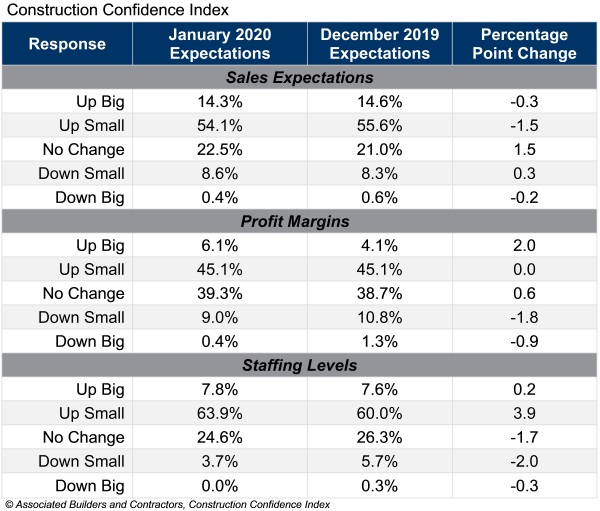 “The good news is that preexisting backlog, as indicated by ABC’s Construction Backlog Indicator, insulates many contractors from near-term dislocations,” said Basu. “Work on existing projects is ongoing, and that will help support many contractors in terms of keeping staff in place and generating cashflow. However, when Boston halted construction on major projects this week, that created a new dynamic—one in which backlog is no longer a source of protection during the early stages of a downturn for impacted construction firms.