More than half of civil contractors have high or very high confidence in the market’s ability to provide them with new business in the next 12 months. 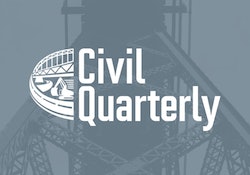 Civil contractors are increasingly optimistic about the outlook for new business over the next 12 months, according to Dodge Data & Analytics’ latest findings in The Civil Quarterly (TCQ). While contractors surveyed reported having a challenging year in 2020, they believe that the market will rebound in 2021. However, most also reported that backlog levels have dropped against their ideal level for the third quarter in a row, dipping from a ratio of 92 in Q2 to 79 in Q4. This is attributed largely to the impact of the pandemic on construction businesses.

TCQ is the result of a partnership with Infotech, Hexagon and Command Alkon and Digital Construction Works, and is based on original research collected from civil contractors and engineers. It provides a quarterly snapshot of the current business health of contractors and explores trends in the industry.

Among the civil contractors surveyed in Q4, TCQ found:

However, the future outlook isn’t entirely bright. The challenge of finding skilled workers has remained consistent with levels reported in Q2 2020. Given civil contractors’ optimism about the volume of work available over the next year, it is not surprising that the majority of those surveyed (66%) expect the cost of skilled workers to increase in the next six months, a 13-point increase over Q2 data.

In addition to regular business conditions, the Q4 TCQ focused on two emerging trends that could have a long-term influence on the industry: digital twins and remote inspection. While still not widely adopted across the industry, both are receiving increased attention.

Just 10% of those surveyed were familiar with the concept of digital twins, and even fewer (9%) have had project owners express interest in the technology. Despite these low percentages, the majority (71%) of contractors believe that at least some owners will seek to create digital twins in the future, indicating a need for handover materials to support that goal.

Typically, a digital twin uses a building information model (BIM) as its base, but Q4 data found that only 39% of the contractors are currently using BIM. This suggests that the industry is not yet prepared to support owner interest in digital twins, despite their belief that it is likely to occur. It also suggests that contractors well-versed in BIM may have a competitive advantage in the future.

Remote inspections are also not yet widely used. Only 14% of industry respondents report experience with them and, of that number, only half cite experience prior to the start of the pandemic – indicating that the need to reduce in-person interactions did not have a major impact on inspections.

The Q4 report findings confirm that the industry is in the early adopter phase of using these tools. However, they also confirm that more than half of contractors – including the majority of those with experience with remote inspections and over half of those without – expect that the share of inspections done remotely will increase over the next three years.

Dodge Data & Analytics will be conducting a series of webinars on the findings of this report, looking at these critical trends. The report is also available for free download.