The Trafalgar Group, a conservative polling firm that polled for the 2016 Trump campaign, conducted a series of battleground polls commissioned by Citizens for the Republic (CFTR) in Michigan, Pennsylvania, Florida, and Wisconsin in June to analyze voters’ views on lifting the Roadless Rule protections in Alaska’s Tongass National Forest.

The poll results found sweeping, across the board opposition in the four states to lifting the Roadless Rule protections in the Tongass, where the majority of raw logs are exported to China, at significant expense to U.S. taxpayers. The current proposal by the U.S. Forest Service would eliminate protections for almost ten million acres of the most pristine areas on the Tongass, resulting in more clearcutting of remaining old growth forests in Southeast Alaska. According to Taxpayers for Common Sense, U.S. taxpayers spend $30 million annually to subsidize the Tongass logging industry. 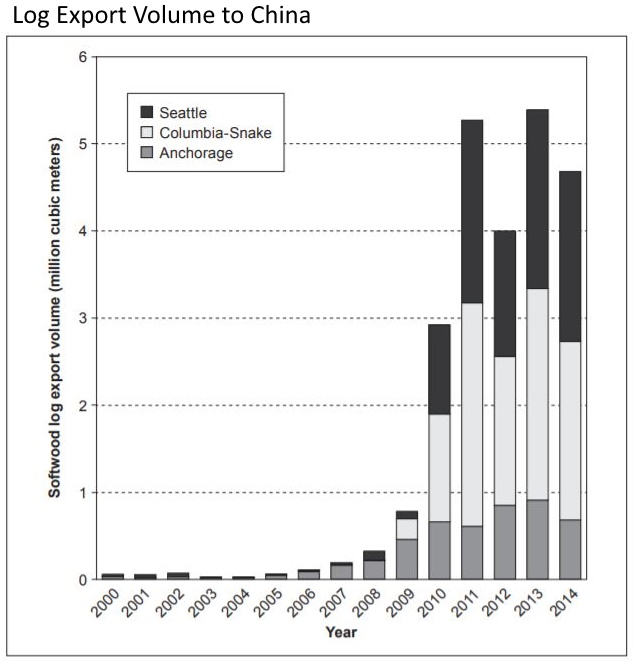 When respondents were told the primary beneficiary of the roll back of the Tongass Roadless Rule protection is China, voter opposition grew six to one:

When 2016 Trump voters were asked how this proposal would influence their 2020 vote, results indicate a dangerous potential erosion of his base if the Roadless Rule on the Tongass is eliminated to benefit China.

In a Trafalgar Group memo on the four state polls, chief pollster Robert Cahaly said, “Noteworthy the percent of existing Trump supporters (measured by the presidential ballot test question) who move to ‘less likely’ to support the President’s re-election (MI 12.9%, WI 15.9%, FL 13.6%, PA 25.3%) could actually move the president well out of competitive range in these critical electoral college states. So, the President’s actions on this issue could very well jeopardize his entire re-election.”

“These poll results underscore the need for the Trump Administration to uphold current roadless protections on the Tongass,” said a statement by CFTR. “On a national scale, voters are trepidatious about further involvement with China, especially when it stands to benefit China’s economy and not ours. President Trump’s campaign for reelection could be adversely affected by a decision to uplift the Roadless Rule, enough to jeopardize his already shaky footing in these toss-up states.”

According to analysis by Taxpayers for Common Sense, over the last 20 fiscal years (FY1999-2018), the USFS spent $632 million in connection with its timber sale program in the Tongass and collected $33.8 million in timber sale receipts, resulting in a net loss of $598.2 million, in 2018 dollars. That is, the USFS lost $29.9 million per year, on average from FY1999 to FY2018. Put another way, Tongass timber sale revenues covered just 5.4% of timber sale costs.

The rate of losses per amount of timber sold has not decreased. During the 20-year period, the USFS reported selling 977 million board feet (mbf) of timber in the Tongass. Overall, the USFS lost approximately $612 for every thousand board feet of timber it sold. Further, the three-year moving average for losses per mbf more than doubled within the last decade, indicating that the financial efficiency of Tongass timber sales is in decline.

Citizens for the Republic, a political action committee founded by Ronald Reagan, is advocating for the maintenance of the “Roadless Rule” protections of the Alaska Tongass National Forest.