The Effect of Curling on Floor Flatness

F-numbers should be measured within 72 hours of floor finishing to best reflect the concrete contractor's efforts. 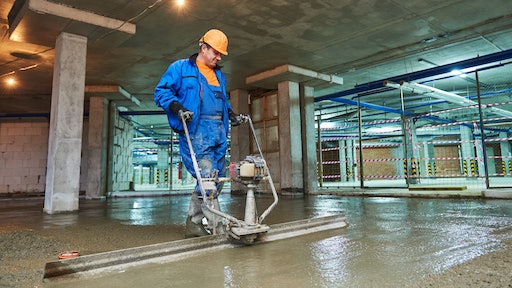 When floor flatness and levelness are measured using F-number technology, timing of measurements is critical because curling of slabs on ground increase with time. The result is decreased F-numbers that may not meet specified values. Changes in F-numbers may present problems for the floor covering contractor who has an expectation of how flat and level the floor should be. The higher the initial FF number, the greater the negative effect of curling. Because of this, Section 4.8.4.1 of ACI 117-06, "Standard Tolerances for Concrete Construction and Materials," requires that:

"Floor test surfaces shall be measured and reported within 72 hours after completion of slab concrete finishing operations and before removal of any supporting shores."

The required time limit applies to both F-numbers (FF and FL) and gap under-straightedge measurements made in accordance with ACI 117-06, but it wasn't always that way. Contractors should check to make sure what ACI document the project specs require. Even though ACI 117-06 is published, 80% of the projects are still using ACI 117-90 and a few still use ACI 117-81.

Requirements for Timing of Measurements

"Floor tolerance measurements should be made the day after a concrete floor is finished and before shoring is removed, in order to eliminate any effects of shrinkage, curling, and deflection."

However, when ACI 117-90 was published, Section 4.5 included different provisions for the timing of the measurements: FL levelness tolerances shall be measured within 72 hours after slab concrete placement. Floor finish tolerances as measured with a 10-foot straightedge must be done within 72 hours after slab concrete placement. There was no time requirement on measuring FF floor flatness, and the commentary gave a reason:

"Since neither deflection nor curling will significantly change a floor's FF value, there is no time limit on the measurement of this characteristic."

The statement in the commentary indicating that "neither deflection or curling will significantly change a floor's FF value" has since been shown to be incorrect. This is why ACI 117-06 required that all measurements - FF, FL and the gap under a straightedge - be made within 72 hours. However, not all specifiers and contractors are aware of this change. The next section explores the effects of curling on F-numbers and why the change was made.

Slab curling is caused primarily by differences in moisture content or temperature between the top and bottom of the slab. The slab edges curl upward when the top surface is drier and shrinks more - or is cooler and contracts more - than the bottom. Curling is most noticeable at construction joints, but it can also occur at sawcut joints or random cracks. The curl can result in a loss of contact between the slab and subbase. Generally, the length of lost subbase contact is about 10% of the slab length (measured between joints) at each joint that has load transfer (doweled or sawcut joints), and about 20% at each joint with no load transfer. These percentages, however, are also a function of joint spacing, concrete properties, slab thickness and subbase stiffness. Upward curl at slab corners can be as high as 1 in. but is typically about 1/4 in.

Reports on two sets of F-number measurements - one for a University of Maryland gymnasium floor and another set for an industrial warehouse slab in Pennsylvania - illustrate the magnitude of changes that occurred over time. The F-number measurements were taken within 72 hours of placement, then 7 months later for the University of Maryland floor and 12 months later for the industrial warehouse slab.

The University of Maryland data was summarized in three different testing locations along the floor:

The FF values at the University of Maryland decreased by about 10% to 20% in 7 months.

The initial measurements for the industrial warehouse in Pennsylvania were taken in October 1990 and the final measurements in October 1991. The initial overall FF and FL were 68.7 and 73.4, respectively. One year later, the FF and FL numbers were 41.4 and 36.8, respectively. The floor flatness values had decreased by about 40% and the floor levelness values by about 50%. Curling can be visually evident by significant peaks at each sawcut joint.

Predicting Effects of Curling on F-numbers

As mentioned previously, the length of lost contact area as a result of curling is about 20% of the joint spacing length at each end of the slab. For a 15-foot joint spacing, the slab curl would be expected to change the profile for about 3 feet from each end. It is possible to take F-number readings from floors with differing profiles, download those values into a spreadsheet, then add a known amount of curl, and calculate new F-numbers. This allows a comparison of F-numbers before and after the curl.

Using this analytical procedure, we recreated the F-number data for the industrial warehouse by starting with a 15-ft. panel and working with an analytical F-number profile that was FF 69 and FL 72. The actual industrial warehouse slab had a 15-ft. joint spacing and was initially measured as FF 69 and FL 73. The initial analytical and measured surface profiles before curling are nearly identical. Upward curling values of 1/16 in., 1/8 in. and 1/4 in. were assumed, along with profile variations being represented by a curve starting 3 ft. from each end of the panel. Table 1 shows the results.

As stated, the initial measured F-numbers for this slab were FF 69/FL 73 and these had dropped to FF 41/FL 37 a year later. This represented changes of about 40% and 50% for FF and FL, respectively. These are about the same percentage changes that would result from slightly less than 1/8 in. of curl.

This analysis method was also used to examine the effect of curling on floors with initial 15-ft. joint spacings and considered to be moderately flat, flat and very flat as defined in ACI 117-06. The amount of curling, as measured by upward deflection values ranging from 1/16 in. to 1/4 in., had a greater effect on the flatness of the floors with higher initial FF numbers. Flatness of floors with an initial FF 25 didn't change much for curling deflections of 1/16 in. and 1/8 in. A curling deflection of 1/4 in., however, resulted in a significant reduction in flatness.

Based on this analysis method, the ACI 117-90 statement that curling will not significantly change a floor's FF value is not generally true. As shown by the analysis, floors with an initial FF 25 would experience a flatness change of less than 10% when 1/8 in. of curl occurred. At 1/4 in. of curl, however, the percentage change is much larger. For a higher initial FF value, even 1/16 in. of curl can cause a reduction in the FF value of about 10%. This analysis indicates that floors with high initial FF values will be more adversely affected by small amounts of curl.

Both analytical and measured values of initial and final surface profile measurements before and after curling have shown that curling can significantly affect F-numbers. To eliminate any curling effect, all F-number measurements must be made within the 72 hours stated in ACI 117-06.

Observing the Time Limit on F-number Measurement is Essential

To ensure that F-number measurements reflect only the floor flatness and levelness resulting from the concrete contractor's efforts, these measurements must be made within 72 hours after completion of slab concrete finishing operations. Otherwise, low F-numbers are likely to be the result of curling. Thus when the floor covering contractor arrives, disputes over the floor flatness and levelness may arise. The cost for grinding or patching a floor that has curled needs to be discussed prior to construction. American Society of Concrete Contractors (ASCC) position statement #6 "Division 3 versus Division 9 Floor Flatness Tolerances" and #30 "Responsibility for Controlling Slab Curling" provide more information on the effect of curling.

More information about curling is contained in Tolerances for Cast-in-Place Concrete Buildings, a book written by the authors of this article and published by the ASCC, www.ascconline.org. The ASCC Position Statements are also available at this website.