For Lenard Powell Inc., the move to Topcon's Millimeter GPS Paving System has resulted in a better product, improved production rates and a smaller workforce. 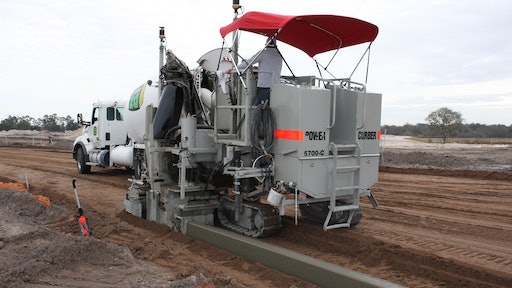 Lenard Powell has been building curb and gutter for better than two decades. In that time, he has poured more than 630 miles of curb—enough to stretch from his offices in central Florida to Nashville, Tenn. Until recently, the overwhelming majority of that work had been done using a tried-and-true technique: a stringline-based system.

Accepting that all things change, however, Powell and his company, Lenard Powell Inc. (LPI), made the move to a stringless, millimeter-grade GNSS solution. That move, he says, has resulted in a better product, less reliance on a survey crew, improved production rates and a smaller workforce. Though it’s only one machine in a larger fleet, they’ve begun cutting ties with older technology—in every sense of the word.

Almost every professional working today has a story of what led them to their respective occupation. Often, it’s just being the next in line for succession; sometimes it’s finding a way to deal with career burn-out. Lenard Powell’s story is not as common—but it’s a whole lot more compelling.

“I could have written the perfect country song in 1996,” he says. “At that time, I was a farmer and there wasn’t much that went my way that year. A broker took me for a quarter million dollars, my house burned down, my wife left me, my favorite dog got killed by a poacher; it was an unbelievable string of events. But I truly believe everything happens for a reason, and I soon found out what that was.”

Lamenting his situation to a fellow parent at a youth rodeo event where his child was competing, Powell happened to mention that as much as he loved farming, he needed to find a new profession.

“The guy I was talking to, Ike Rainey, told me, ‘Well, I could use a curb man,’ Powell recalls. “I had no clue what a curb man was, so he explained that his company was trying to build up the road building part of its business and they needed someone to create curb and gutter for them."

Interested in the job description, Powell rode with Rainey for a week to see how things were done and give it a shot.

"I copied a phone number off a Kurber5000 I saw in use elsewhere, called them and, using a portion of the insurance proceeds from the house fire, made a down payment on my first curb machine," he says.

Rainey now retired, Powell still works as a subcontractor to his company, Rainey Construction. And today, one of its biggest clients, The Village, is constructing new homes on the same land Powell used to plant watermelons—and he's doing the curb for those roads.

LPI’s growth was slow but steady, and Powell soon had his company tackling a decent schedule of projects, running eight curb machines and employing more than 100 workers during peak season. Faced with the Great Recession in 2008, they downsized, and unlike many others, were able to survive.

“That downturn forced us to correct ourselves and get to a more manageable size," Powell explains. "Since then, we’ve kept under 50 employees, and it’s worked out well.

Most of Powell's work is done in The Villages, Florida, a region located between Orlando and Ocala in central Florida. Offering a wealth of amenities, including recreation centers, softball fields, a polo stadium, as well as 12 championship-level and 38 executive golf courses, the community was the fastest growing metropolitan area in the United States between 2010 and 2017, growing 32.8% in that period.

Even though LPI was moving along nicely with its fleet of existing curb machines, Powell was not oblivious the discussion around him of a stringless solution revolutionizing curb and gutter work. He had, in fact, seen a system demonstrated in the past but was apprehensive about making a move at that time.

“I saw it several years ago at World of Concrete in Las Vegas and felt there was no way it could be as accurate as we needed, using just GPS,” he says. “But when Roger Croft from Lengemann, our Topcon dealer, showed me that Topcon had combined it with laser technology to bring it to millimeter grade, I decided it was time to give it a serious look. We added it last year on a Power Curber 5700C and are really impressed with what we are able to do now.” 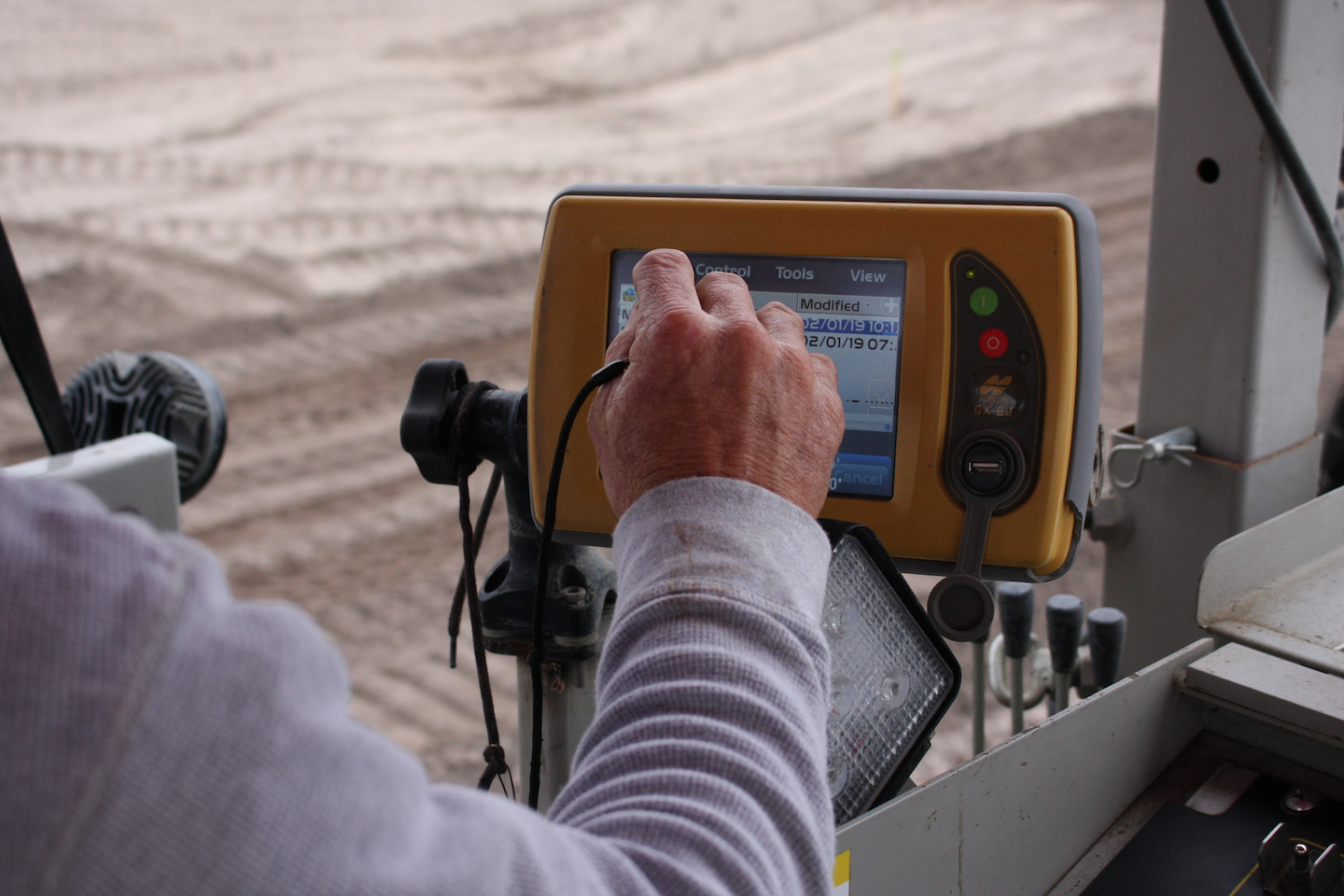 The stringless solution has enabled LPI to reduce labor by as many as four men on select projects.Larry Trojak

The catalyst for turning LPI’s PowerCurber unit into a stringless curbing solution is the Millimeter GPS Paving System from Topcon Positioning Systems. Millimeter GPS provides Powell’s crew with the benefits of GPS positioning technology, bolstered by a zone laser reference to improve the accuracy of the curb machine to the levels needed.

“When we pour curb, our design calls for a .5% slope—it cannot have any dips, it has to run,” he says. “That’s attainable with string, but you need to have stakes every 25 ft.  with the offset and the grade on each, then literally get down on your hands and knees to eyeball it. Running the stringless system, we only have an occasional reference stake; the rest is all automatic. Putting all our faith in that system took some getting used to, but it’s proven itself on every job we’ve done, and the benefits are substantial.”

Powell’s view of the term “benefits” differs from that of other similar contractors who tend to focus solely on a financial equation. In fact, when pressed for an estimated return on investment for the stringless solution, he chooses instead to offer an alternative way to frame his savings.

“The truth is, it’s getting tougher and tougher to find good workers,” he says. "Pouring curb and gutter is hard, hot, nasty work, and here in Florida, summer days are generally 90-plus degrees with high humidity. Very few people—let alone new, younger workers—want to work outside in those conditions. So, for us, reducing the size of our labor force through the use of the Topcon stringless solution is a much bigger benefit than any straight financial payback.”

To illustrate just how that savings is realized, it’s best to look at the way in which LPI approaches its stringline-based jobs. For such projects, a survey crew must stake the entire job rather than just periodically. Survey is followed by a stringline crew and then the curb crew. More than 75% of the company’s curb work is now done without string, and production rates have been averaging about 4,000 ft. per day.Larry Trojak

“With the Topcon system on the Power Curber unit, we’ve eliminated the stringline crew entirely and cut the survey crew by about two-thirds," Powell explains. "If we weren’t so adamant about checks and balances, we could probably cut our dependence on survey even more. But we subscribe to the ‘measure twice,  cut once’ principle, and it’s served us well. So reducing crew size on certain projects by as many as four men is how we are seeing payback.”

According to Powell, he and his crew are admittedly far from tech savvy, so the transition to the stringless solution was not without its bumps. While one particular issue was resolved by increasing the sensitivity in the curb machine’s slope leg to improve reaction times, gaining a basic familiarity with working in a GNSS environment was really at the root of it all.

“We were expecting some hiccups and we got some,” he says. “However, Roger Croft, Lengemann’s sales manager, is an amazing asset for us. He understands that we are concrete guys and that learning to run this new technology was a bit of a challenge at the outset. Despite being extremely busy, he’s been here whenever we’ve needed him and always takes our calls—in many cases helping us solve an issue over the phone. He genuinely knows the technology and backs up the sale. Power Curber has also been great. They have a tech in Webster, Florida who helped us through problems that have come up—everyone has been very responsive.”

Millimeter GPS has definitely found a home with LPI. Since making the move, more than 75% of the company’s curb work is now done without string, many of those eight curbing units have been reconfigured for other work, and production rates have been averaging about 4,000 ft. per day. While those rates were attainable with the old system, getting there would have taken all the additional manpower described earlier. The overall process has been so streamlined and efficient, that working on projects outside of The Villages, draws some strange comments.

“When we pour elsewhere and tell them we want to pour curb and gutter at 9 a.m., we need 200-plus yards of concrete, and we need trucks delivering mud at 20 minute intervals, they literally laugh,” Powell says. “They are thinking we can’t possibly need it that quickly—but we do. The new stringless system has us just humming along. It took us a bit to get into a groove, but we are definitely in one right now."

Powell adds: "On most projects here in The Villages, the contractor has eight or 10 pipe crews working, and they still can’t outrun us. We made the right move."