In the Shadow of Lady Liberty

The use of precast concrete in the design and construction of the Statue of Liberty Museum creates perfect solution for logistics, sustainability, durability and aesthetics. 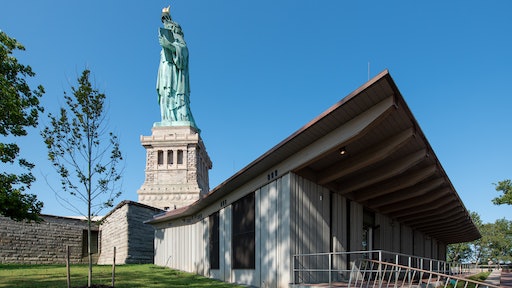 It was a big-name project with countless performance requirements. There’s the logistics, such as shipping building materials to an island. It needed to withstand hurricanes and flooding, endure for more than 100 years and have sustainability woven into the design. The building height was not allowed to be taller than sea level, for fear of obscuring the view of the Statue of Liberty. It also needed to be iconic, but not overshadow the prized Lady of Liberty.

The Statue of Liberty Museum was constructed on Liberty Island last year, meeting all of those performance requirements. The $100 million, 50,000-square-foot structure was spearheaded and paid for by the Statue of Liberty-Ellis Island Foundation and the group had substantial expectations for the project. 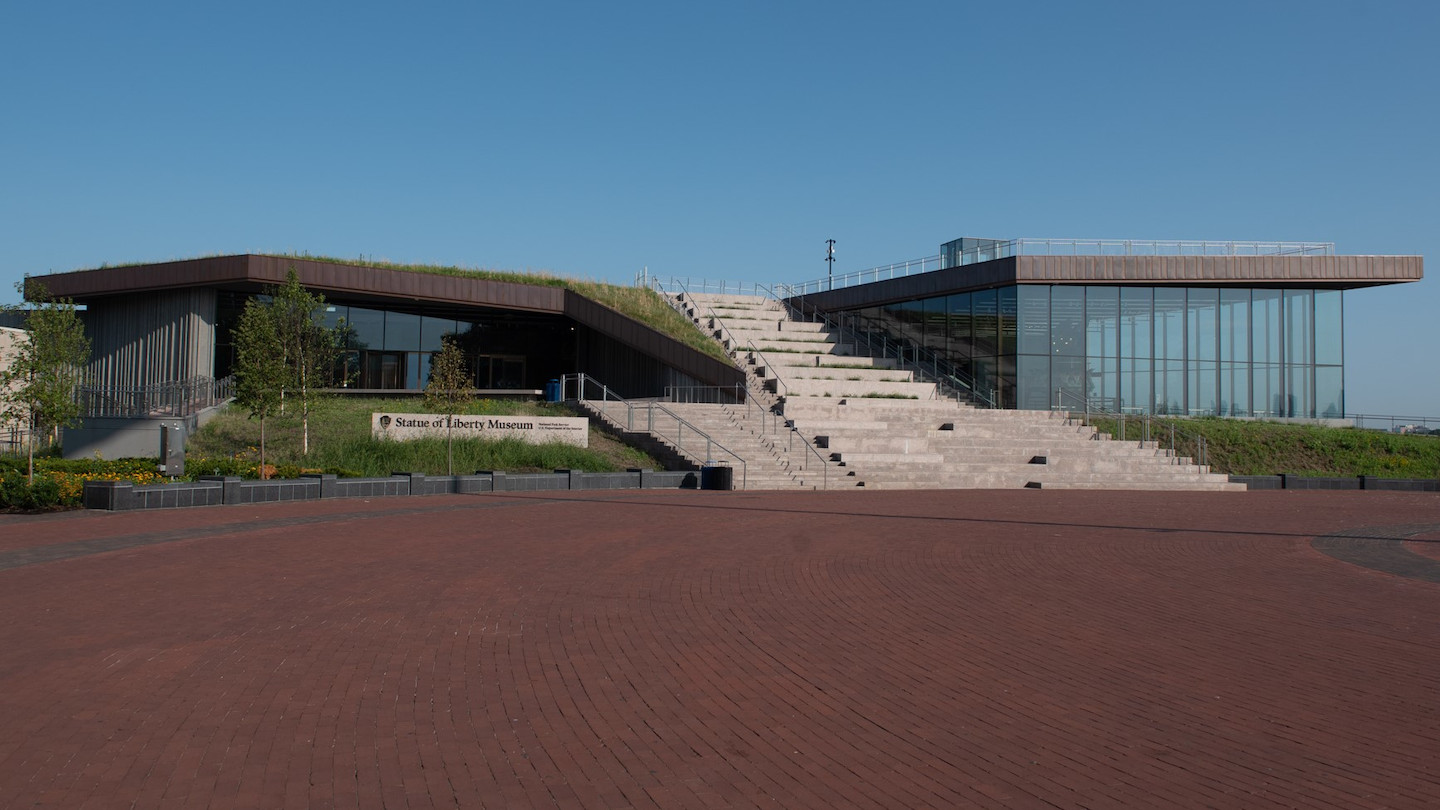 The problem solving and work that was needed to make the museum a reality was all worth it in the end. In July, the museum received a 2020 PCI Design Award for Sustainable Design.

“The judges felt this was the best project for the sustainability award because it was designed for 500-year floods and it was designed to have an actual flooded basement, so there are panels with holes on the bottom of the structure that allow for the extreme events and extreme storms that occur,” says Roksana Taghizadeh, chief engineer for EnCon Design, one of the PCI Award judges. “Precast helped reach the building’s goals with limited maintenance and repair through flooding resiliency, with strong, durable material that can withstand saltwater.”

“The basic design of the project has a lot to do with the landscape and specifically bringing the natural landscape up and around the building,” says Dan Piselli, director of sustainability for FXCollaborative Architects, the project’s designer. “When you look at the aesthetic intention, the building is trying to defer to the Statue of Liberty and the historic aspects of Liberty Island. And part of the way it does that is by blending in with the landscape.”

“What's involved with getting that is essentially designing the glass such that there's a pattern on it that birds can see so they’re not fooled by the glass,” he says. “It’s a surprisingly large issue; up to 1 billion birds here in North America die by hitting a glass building. The project was accentuating and blending in with the landscape and we realized we might be exacerbating that problem. We were able to come up with a pattern on the glass that people could see out of quite effortlessly.”

Precast Made It Possible

Specially designed precast concrete panels played a big part in the building’s success, not only for its ability to improve logistics, but also for its weather resistance and sustainability. The insulated sandwich panels also allowed for improved insulation.

“We added an extra inch of insulation, more than required by code and the connectors, the sandwich construction and selected a fiberglass type of connector, which isolates exterior precast from the interior precast,” Piselli says. “Between the additional insulation and thermally isolating connectors we had very high performance and wall thermal pointing, which leverages the thermal mass of the interior side of concrete.”

Precast was used for thermal bridging reduction, as well.

“Of course, insulation is important, but also thermal bridging is very important,” he says. “Once you're taking care of both of those things and pushing the build version again, the interior thermal mass of materials like concrete helps regulate the temperature inside the building. Once your heating and cooling system gets the wall to the expected temperature, then it helps keep it there, so that when people come into the space and their bodies are indoors, your temporary air goes in and out. The mass helps compensate for those interior loads so that the heating and cooling system doesn't have to compensate.” 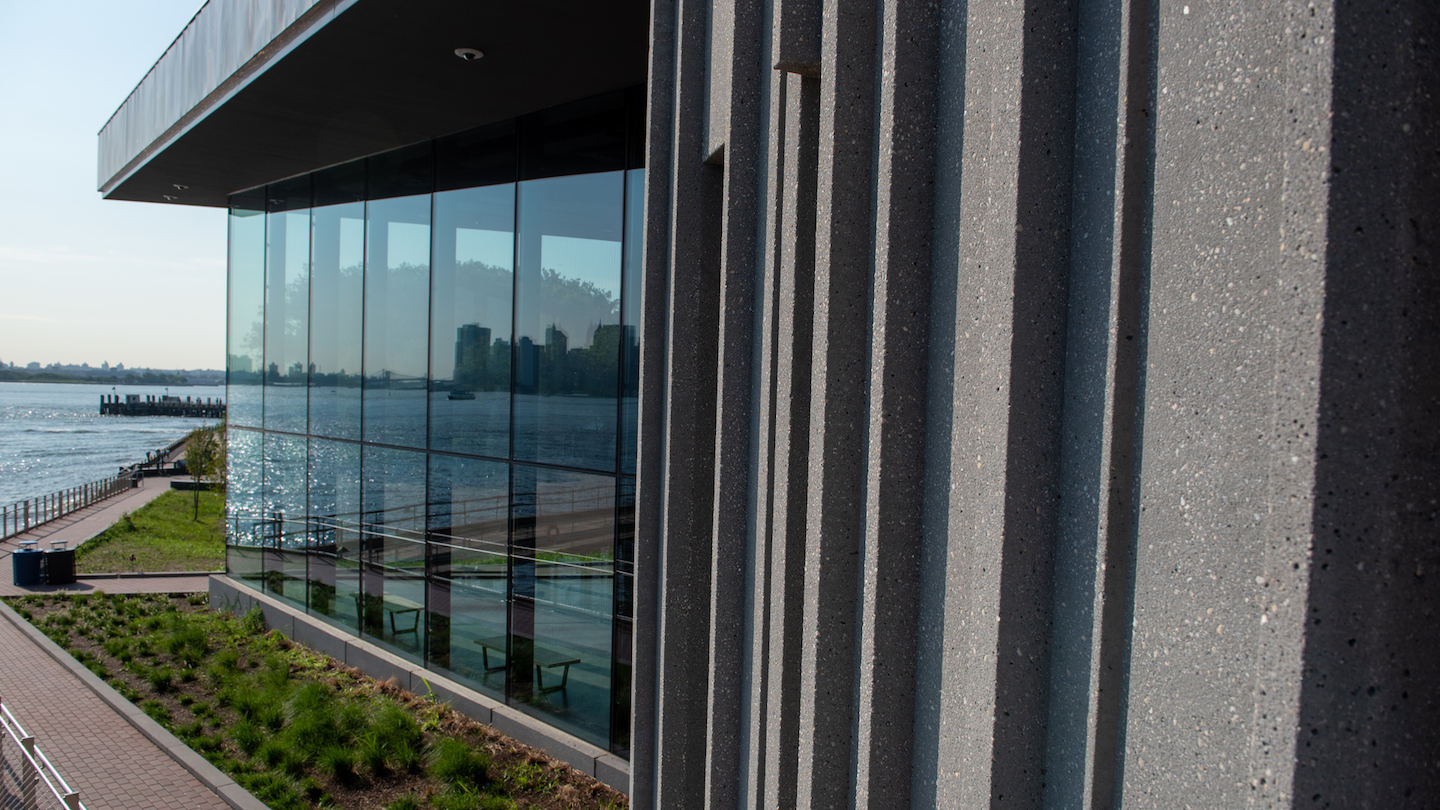 Project leaders wanted another type of sustainability, too: durability and resiliency. For one, they wanted it to last for years. It was also important that the building be able to withstand seawater surges, winds and hurricane-level storms.

“As a primarily concrete building and structure, the building is really kind of designed to withstand floods and storms and designed to last a long time,” Piselli says.

At first, they considered steel frames but realized that might not be the best material for an island surrounded by salt water.

DeSimone Consulting, the engineer of record for the project, was discussing options for building materials with members of the foundation. DeSimone President Wajdi Atallah had worked with Bob Pabst, vice president of sales at High Concrete Group on various projects in the past, so he gave Pabst a call.

“They were concerned about sustainability, long-term durability of any building materials selected,” Pabst says. “They wanted to build a building that could last 500 years or more.”

Atallah called Pabst asking if precast concrete would be a viable material to use in the project.

“When they told me about the materials, colors and design motif, I started telling them what the attributes of precast were and the versatility of it, what you can do,” he says. “I said, ‘We can come up with a hybrid structural frame where you take the benefit of the precast walls around the building enclosure to be load bearing. And we could take the shear and load of steel from an interior steel frame. They liked that idea because they didn’t want a lot of steel around the perimeter. With precast, you don’t need it.”

For the interior, there could be more of a mix of materials.

“For the interior, you have the steel columns and joists and make them connected to the walls,” Pabst says. “In the interior, they had this cast-in-place core for the elevator that provided shear for the building. They were concerned about shear for the structure around the perimeter and didn't want to pour more concrete or add more steel. I said we could use insulated precast wall panel product. We can design the walls to take that shear and they could take the load of the steel. They could provide shear for the building and the load bearing for themselves.” 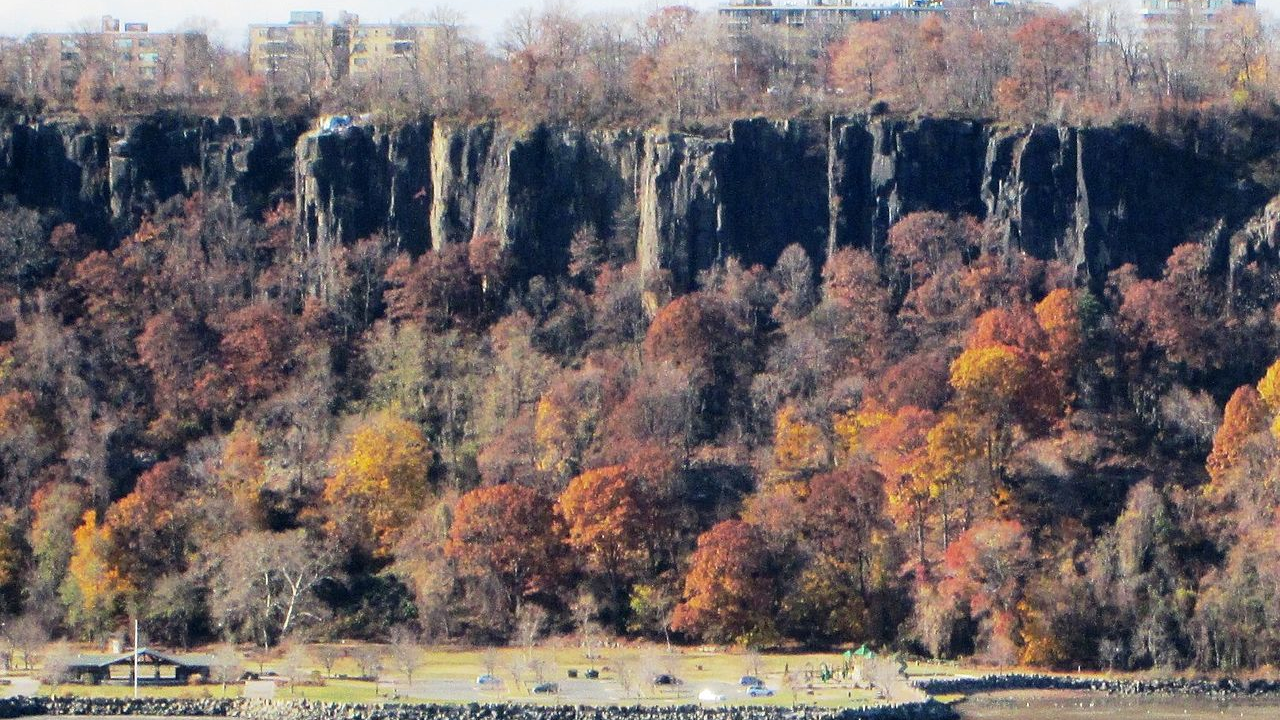 The precast concrete panels on the exterior of the Statue of Liberty Museum were modeled after the Palisades Cliffs in New York, pictured here.Wikimedia Commons

During the early stages of the project, FXCollaborative came up with an aesthetic plan for the building. They wanted the structure to appear as if it “rose up from the ground.” Not only were they in search of natural earth tones in the coloring, but they also wanted it to resemble the nearby landscape. Specifically, they wanted it to mimic the vertical striations of the Palisades cliffs along the Hudson River.

“Their vision for the building was for it to look like it rose out of the ground right up near New York Harbor, up the Hudson River is the Palisades Cliffs,” Pabst says. 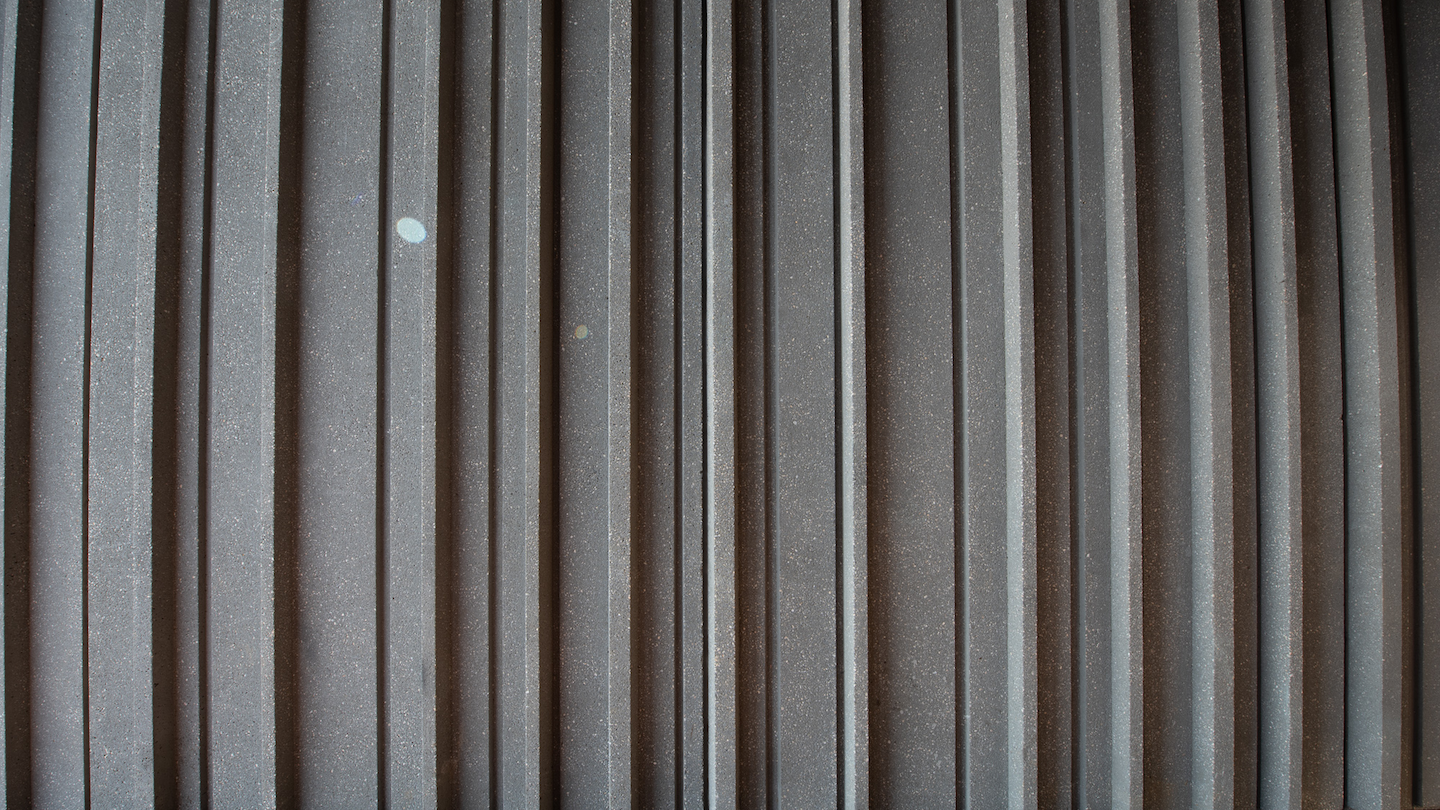 Not only were they in search of natural earth tones in the coloring, but they also wanted the exterior to resemble the nearby landscape. Specifically, they wanted it to mimic the vertical striations of the Palisades cliffs along the Hudson River. They were able to achieve that look with precast.Timothy Schenck

A Precast Solution for Flooding

They also wanted the building to withstand flooding.

“We had to then look at the weight load and relief holes in the wall panels as openings that allow the water to come in,” he says. “At the same time, we had to keep that panel fully insulated. And we had to orientate them because at the floor level there had to be that water stop. On the design of the building, which is not that tall, we came up with a scheme for them to do panels along all the grade beams that were a certain height and as long as possible. In precast, a number of pieces can drive up the installation costs. You want to optimize the cost, the economies, to make a piece really big, but not too big where it's a big, permanent load.”

While meeting all the criteria associated with insulation and sustainability, resiliency and waterproofing, as well as the aesthetics and striation façade, the team had to be careful about the width of the walls.

“The interior panels, structural wise, were very hefty, 12 or 16 inches in and of itself,” he says. “Right then, the insulation was all 4 inches. The architect developed a profile design that wanted to show these vertical striations and they came up with a repeating pattern. It was a ribbed profile that had different dimensions out from base of the concrete, and I think the greatest one was about 4 inches. So, when you look at the cross section of the exterior width, you always need 3 inches continuous insulate concrete.”

After a lot of collaboration, High Construction and the engineers were able to come up with a solution that accommodated the insulation needs, as well as the aesthetic pattern on the exterior wall. 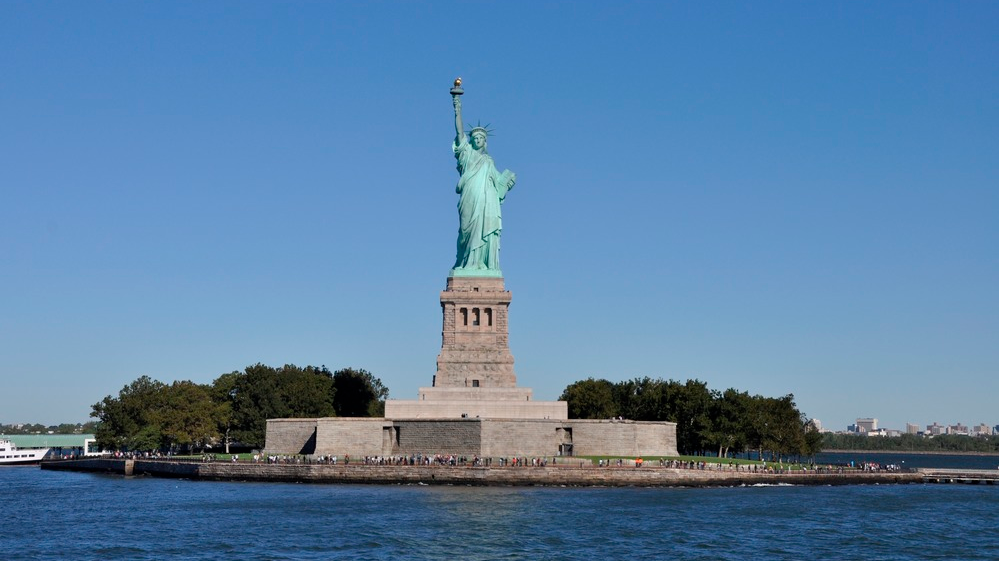 One of the greatest challenges of the project was the site’s location. Instead of forcing each subcontractor to find their own transportation to the island, Phelps Construction, the general contractor for the project, hired a ferry and built a receiving dock on the island.

“It was a very smart move for them to tell all the vendors that Phelps is going to cover the costs for a ferry,” Pabst says. “They took cost of it for the entire job. All the trades didn't have to worry about figuring out that cost.

High Construction could fit up to four of its trailers, batched concrete and 73 wall panels on one ferry trip. They took a crane over and assembled it on the island to place the walls.

“We were able to drive the trucks right on the ferry and then drive them off, so it's eliminated that wait and down time,” he says. “And panels go up easy.”

Pabst estimates months of construction time was saved by using precast. The entire project moved ahead more quickly and was able to avoid winter weather.

“With precast, all your time is spent upfront in design and then in the factory making them, so to install the product, it goes up quick,” he says. “They didn't have to worry about weather, and they compressed their whole construction schedule.”

The team had planned for reduced productivity because of the travel time. Overall, productivity was 30% better than predicted, Pabst says.

Everyone involved has said they were proud to be part of such an iconic, and patriotic project.

“It came out great, it came out beautiful,” he says. “If someone were to ask me ‘what project are you most proud of?’ It would be this one.”