How to prepare a conrete surface for decorative concrete overlay

A decorative concrete overlay is only as good as the surface it is applied to. Use proper surface preparation to ensure a successful finished product. 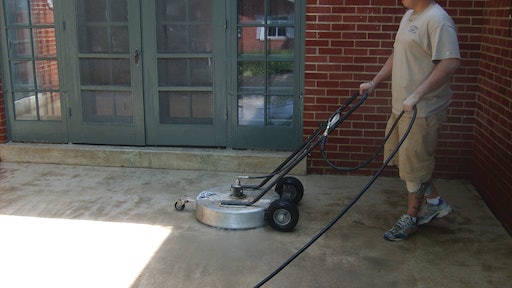 Proper surface prep includes removing any coatings or impurities on the concrete slab as well as leveling and profiling the concrete so the overlay can bond with the surface.

The most essential step to ensure a successful decorative concrete overlay - or any overlay for that matter - is the surface preparation. Surface prep is the key to an overlay's bonding and adhesion.

The most common result of improper surface prep is delamination of the coating. "Delamination is basically where the bond line is broken, and it allows the overlay material to just flake off. It is often misunderstood as material or product failure," says Brian Anderson, director of operations with Concrete Coatings Inc.

Next, identify any possible bond breakers. These could be easily visible like paint stains or a floor covering or invisible like a cure and seal or grease spots. "If there is sealer or paint or whatever that's going to prevent the makeup of the overlay from getting to what it needs to get to it's not going to bond," says John Reynolds, director of training with Solomon Colors/Brickform.

Lowe suggests using a water test to check for invisible bond breakers. Pour a little water onto the surface, and if it beads up or sits on top of the concrete there is something there that will prevent the overlay from bonding.

Bond breakers can either be removed through mechanical or chemical means, Lowe says. The method used will depend on what you are removing and what type of profile is needed. Using a chemical on the concrete will strip off the bond breaker without profiling the surface. Lowe suggests using an acid etch as well to profile and create a more porous substrate for the overlay. If chemical etching is used to remove impurities, all acids should be removed and the concrete neutralized before applying the overlay.

Mechanical methods include grinding, sanding, shotblasting and scarifying. This may be the method of choice if you need a heavier profile or when working indoors where chemicals may cause issues.

Handheld grinders can be used to remove impurity spots, Anderson says. "When in doubt, grind it," he suggests. But use some finesse. Be careful not to over grind or dig deep gouges with the grinder. This will result in an uneven floor.

Mechanical surface prep methods and repair will create dust so properly clean the surface and the work site before beginning the profiling step.

If a concrete surface only has bond breakers in spots - not covering the entire slab - a degreaser may be used. But Lowe suggests degreasing the entire concrete slab just in case there are spots that were overlooked.

Before profiling, determine the type of concrete surface needed for the overlay to adhere. This is dependent on the overlay material and the depth of material being applied. For example, epoxies typically require a more aggressively profiled floor than some other overlay materials, Anderson explains.

How aggressively the concrete surface needs to be profiled will also influence the equipment needed for the profiling. Reynolds suggests purchasing hand grinders, pressure washers and maybe a walk-behind grinder. If a contractor applies a lot of overlays indoors, he may want to invest in a vacuum system as well. But if you have access to equipment rental Reynolds suggests renting some of the larger equipment like shotblasters.

After profiling, properly clean the surface one more time to make sure all the dust and impurities are removed.

"A typical industry standard is between 3 and 4 pounds per 1,000 square feet. Anything that exceeds that you need to deal with appropriately," Anderson says. "If you're anything above that consult the material manufacturer to find out the best way to handle it." Anderson usually recommends a vapor barrier or vapor dissipating epoxy underneath the overlay.

Contractors also need to test how much moisture is in the concrete. This can be done using either a calcium chloride test or a probe in the concrete, Reynolds says. While the calcium chloride test has been used for moisture testing for years, the newer probe test will measure deeper into the concrete. "There are arguments for both the calcium test and the probe. My feeling is you can never be too safe, and doing both certainly wouldn't hurt. And refer back to the manufacturer's recommendations or specifications as to the maximum amount of what moisture vapor transmission should be for their product to work," Reynolds says.

Rules to live by

And when in doubt, call someone who knows more, Lowe adds. Always ask for help before moving on. Talk to the overlay material manufacturer and find out what surface prep they recommend.

Cracks and Joints in Decorative Overlays

Overlays are not designed to repair cracks," says Tim Lowe of Increte Systems. But if a crack is left unrepaired it will result in problems, including causing the overlay to crack and fail itself.

Cracks must always be cleaned prior to repair. Lowe suggests filling cracks with an epoxy and then broadcasting silica sand over the epoxy to provide a profiled surface for the overlay to adhere to.

Existing control and expansion joints and saw cuts can't be ignored either. "If control joints are completely overlaid there is great potential the slab will continue to move and that movement will create a crack in the overlay," Lowe says. "The overlay will then rub up against itself and that will lead to spalling and delamination."

Lowe notes that joints need to be honored where the original joints are placed. If a contractor cuts new joints into the overlay but covers the old joints, the concrete will still move in those spots resulting in the problems just mentioned.

Contractors have options when choosing how to deal with existing joints and saw cuts. A contractor can overlay the entire surface and then recut the overlay joints directly above the existing slab joints. This isn't always the best option if the joints are wide, Lowe says.

Another option is to use a moistened mason string. Lowe says to place it in the saw cut or joint prior to applying the overlay. Before the overlay is cured, lift the string out of the joint, exposing where the joint needs to be cut. Come back the next day and finish cleaning and cutting the overlay joints.

A third option is to use the joints as starting and stopping points. Lowe says contractors can mask off the jobsite along the joints or saw cuts, outlining where the contractor should stop the overlay. This prevents the contractor from overlaying directly over the joints. This also saves time because the contractor will not have to cut out the new joints.