BNC Concrete uses Beer Stain to stain a floor with imperfections that could not be mechanically removed. 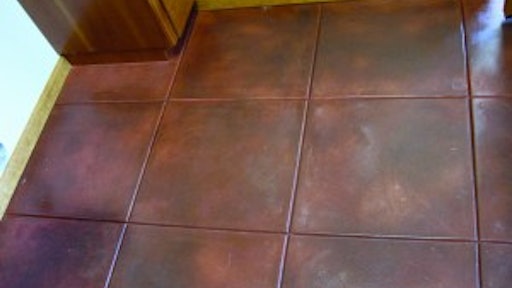 BNC Concrete mixed chocolate brown Beer Stain from GG Innovative Products with lacquer thinner as the carrying agent to restain a residential floor where mechanical removal of coatings and stains was not allowed.

Using the right products on concrete is important, and a lot can go wrong if the wrong products are used. BNC Concrete, Grant Pass, Ore., learned this firsthand. BNC was called in to fix a residential floor with color issues and sealer delamination, says BNC Owner Ben McGuire. The floor incorporated radiant heating and was originally integrally colored.

BNC put in two months of research to find out what caused the problems and how best to fix them. In order to reach a conclusion, BNC spent time figuring out what the original color of the floor was, what stains were used and what sealer was applied. McGuire says the 2,800-square-foot integrally colored floor was originally stained with a wood stain which negatively reacted with the sealer causing it to fail.

To add to the challenge, the homeowner requested that no grinding be done on the floor. So BNC had to find the right method and products to remove the failing coatings and then restain the floor to get the look the homeowner desired.

BNC worked room by room on the job. They first tested the new system in the laundry area before applying it to the entire floor surface, McGuire says. The project was started mid-March and finished at the end of May.

After McGuire removed all the coating he could, he stained the floor with a chocolate brown Beer Stain from GG Innovative Products, Inc. Because some of the coatings still remained on the floor, McGuire needed a stain that could penetrate those coatings. Water-based carrying agents would not penetrate that barrier, so McGuire mixed the Beer Stain with lacquer thinner. "That allowed us to spray over the top of the concrete and it would penetrate through any existing sealer or imperfections and stain the concrete below. Without the ability to mechanically remove any of the sealer it was vital to have the ability to penetrate through it," McGuire says. "Without that I couldn't have done the job."

McGuire mixed the Beer Stain and lacquer thinner in a 5-gallon metal paint can with a drill and mixing paddle. He then used a half-gallon Chaplin handheld solvent pump-up sprayer to apply the stain. He sprayed the stain in figure eight patterns to reduce streaking and puddling.

"We ended up doing a fine mist coat of sealer and another coat of Beer Stain over top," McGuire says. "It helped add to the penetration and the intensity of the color was darkened up quite a bit." The result was the dark brown mottled look the homeowner was looking for.

He spray applied two coats of GG Ultra Seal mixed with lacquer thinner to finish off the job. The Ultra seal and lacquer thinner were also mixed using the drill, paddle mixer and pail, McGuire says. The Ultra Seal provided a low gloss, low sheen finish for the floor. It is also low odor, which was important for an indoor job like this because the homeowner was living there while the work was being done.

Do you have a project you would like Concrete Contractor to consider for "On the Job"? E-mail your idea to Kim Johnston at Kimberly.Johnston@cygnusb2b.com