Surfacing Solutions’ flexibility in the field resulted in successfully honed floors and a stairway at a community college in California. 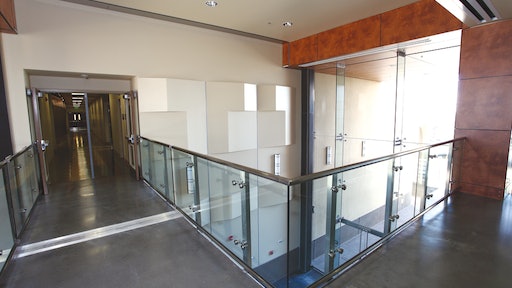 At Miramar College, Surfacing Solutions polished 9,000 square feet of floors, including this second floor area. Crews had to use a lift to get grinders through a framed window because elevators were not working.

When Shawn Halverson, president of Surfacing Solutions, Inc., took over 9,000 square feet of concrete polishing, part of an expansion project at San Diego Miramar College, he was met with several challenges. The architect had originally specified polished floors without color and with little to no aggregate exposure. After his crew took its first pass on the floor with 80-grit metal bond abrasives, he found out why the previous two concrete polishers backed out of the project.

"The concrete wasn't what you would normally polish," Shawn Halverson says. "But with our experience, we were able to troubleshoot the issues and produce a quality floor."

Halverson's experience in the concrete industry started with his involvement in a structural concrete company. In 1999, he opened Surfacing Solutions, Temecula, Calif., as a full-service decorative concrete firm working both residential and commercial jobs. Over the years the company has shifted its focus into the commercial market, today performing about 90 percent of its jobs in the commercial realm.

Halverson and his crew has been polishing concrete for seven years. "The polishing industry has matured, with manufacturers coming out with better products and better equipment," he says. "That has made the work much easier and contributed to a better end project."

The ups and downs of concrete

Coming in on the tail end of the project, Halverson bid the job at Miramar College on paper before seeing the concrete. He says while he prefers getting involved in a job early enough to hold a prepour meeting with the general contractor and concrete contractor pouring the slab, that only happens on about half his jobs. Learning to be flexible and knowing how to deal with the slab at hand makes a great concrete polisher.

The main challenge with the floors at Miramar College, which were spread out in seven different locations throughout three buildings on campus, was they were not flat. Halverson says there was up to a ¼-inch variation throughout the floors and the 80-grit metal abrasives, a typical starting point on new floors, were just taking off the high points. "We had to start our cut with 40-grit metal-bond abrasives, which allowed us to take out both the peaks and the valleys," he explains.

Getting the general contractor and owner to agree to this extra step wasn't easy. The cost to perform this flattening pass, in both the north-south and east-west directions, would be hefty, so Halverson needed them to agree to cover the expense. "I explained to them that a wavy floor produces a scattered light reflection pattern, while a flatter floor offers a more orderly light reflection pattern," he says. Because the new buildings at Miramar College contain a lot of windows to take advantage of natural lighting, it was a critical point for Halverson to convey in order for his floors to look their best at the end of the project.

Halverson cut a deal with the architect, concrete contractor and general contractor. If they liked the results of the 40-grit pass, they would pay the extra cost for the step. If they weren't impressed, Halverson wouldn't get paid for that portion of the job. In the end, the group had to agree — they couldn't deny the improvement. "We were able to recover the clarity of reflection," Halverson says.

The architect had originally requested a 1,500-grit polish, the level he thought the contractor would need to polish to in order to achieve the level of shine he was looking for. But Halverson stopped the job after the 400-grit abrasives, having achieved the architect's desired level of shine at that point. Stopping the job after the 400-grit abrasives also saved the owner money by cutting out about 120 hours of labor.

Since the 40-grit metal-bond abrasives cut the floor deeper than the architect had originally envisioned, Halverson talked the owner and architect into allowing him to add color to the floor. After completing the 400-grit step, his crew applied a densifier and a subtle, charcoal-colored dye, which evened out the color on the floors and brought consistency to all the honed surfaces. The crew then ran a high-speed burnisher. After the application of a floor guard product the crew ran the burnisher again.Fo

An additional 'step' in the process

A concrete stairway posed another challenge to the Surfacing Solutions crew. When writing his original bid, Halverson was under the impression only the treads would need to be ground and processed. When he finally got on the jobsite and saw the stairs for the first time, he found them unattractive and realized all treads and faces would need to be processed. "I underbid that part of the job," Halverson admits. "Since then I've started looking at stairs differently."

Halverson had one crew member dedicated to the stair work. Using a 120-grit metal cup on a 7-inch hand grinder, the crew member defined the stairs, evening them out and giving them a consistent cut. He then processed the stairs, dropping down to a 50-grit resin abrasive and moving up to a 100-, 200- and finally 400-grit resin. Halverson says his crew member spent 40 to 60 hours on each of the three flights of stairs. "We were able to define them, polish them and stain them, and they turned out great," he says. He used the same subtle light charcoal dye to tie the stairs into the floors.

After the project, Halverson adds, "Our operations manager, Keith Cantillon, made sure we sent him to a chiropractor to get his back fixed up. He was on his knees for 3 weeks and he worked very hard. The final product was awesome and beautiful."

Every polishing contractor knows the concrete slab isn't the only factor on a jobsite that can cause problems. For Surfacing Solutions, several external factors made the job more difficult and cut into profitability.

"When I walked the job for the first time, the maintenance supervisor assured me the elevators would be working," Halverson says. But when it came time for the Surfacing Solutions crew to move their equipment to the second floor, the elevators were down. "We had to bribe a framer to lift our grinders through a finished window frame," Halverson continues. "It can take a couple hours to move a piece of equipment like that. Since we had seven locations on the jobsite where we were grinding, our efficiency dropped because of these moves. A contractor can lose a lot of money moving equipment. Now we anticipate this in our bids."

Another jobsite difficultly arose due to the timing the general contractor built into the construction schedule for the polishing crew. "Since concrete polishing is so new to many general contractors, we're always put in the schedule at the wrong time," Halverson explains. "Sometimes it's too early in the schedule and the other trades end up trashing our finished floor. Other times it's too late and we have to deal with protecting the other finishes in the building."

Since Surfacing Solutions came in on the job at the tail end of the project, they had to deal with the spot in the schedule they were given. "In the pottery classroom, lockers were already installed and the walls were finished. We were wet grinding, so our crew had to take time to ensure everything in the room was protected from the polishing process," Halverson explains.

Despite the multiple challenges thrown at them, the Surfacing Solutions crews used their experience in concrete polishing to work through each one and deliver a successful job.