Polishing Goes Back to School

Eagle Valley High School in Eagle, Colo., has a concrete cafeteria floor that was dyed and polished by Concrete Floor Systems. 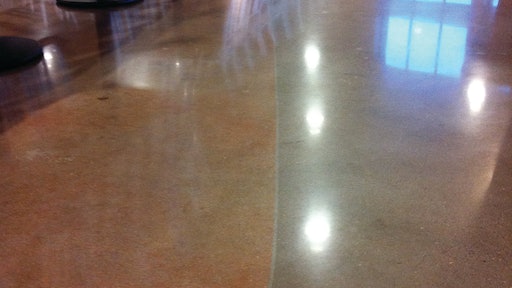 Concrete Floor Systems is a company that specializes in polishing and staining. The company has 17 employees and a large fleet of equipment, including 10 grinders.

On the Eagle Valley High School job, before the concrete contractor poured the slab, Weaver met with the other contractors in preconstruction meetings. In these meetings the contractors discussed what was needed for a successful floor that would take a polishing, including a very flat, smooth floor and good edges. “It’s important to stress the importance of edges during the pre-construction meetings. You get the job to do the floors but you get paid to do the edges,” Weaver says.

Before starting the polish, Concrete Floor Systems’ crew had to hand repair the hairline cracks in the concrete slab. Since the cracks were not that large, Concrete Floor Systems used a vacuum to clean out the cracks. They then hand filled the cracks with crack filler from Quikrete and finished by hand grinding over the cracks. “We used hand grinders so the material would not pop out on us as we were grinding the floor,” Weaver says. “It takes a little time to repair the cracks this way but we feel like this is the best way to do it.”

Using two colors of specified dyes, Weaver created a mock-up to show the architect before proceeding. “Do a mock-up even if the specs don’t call for it,” Weaver suggests.

Polishing the slab was a challenge from the beginning because it was really hard concrete. The specs called for Concrete Floor Systems to start the grinding with a 30-grit metal-bond abrasive. “Because the concrete was so hard we didn’t get the amount of rock we usually would, but we did get down to a good salt and pepper aggregate,” Weaver says.

Using a Substrate Technology, Inc. Prep/Master 4430, Concrete Floor Systems wet ground the floor with a light buzz using the 30-grit metal abrasive before moving up to a 70-grit metal abrasive. From there the crew switched to a 50-grit resin pad followed by a 120- and then a 220-grit pad, all of which were used with wet grinding, Weaver adds.

After finishing with the 220-grit wet grind, the crew continued polishing with dry grinding. They started with a 400-grit resin. At this point, color and densifier were applied. The specs called for QC Construction Products dye in colors Sweet Potato and Malt Brown.

After cleaning the excess dye and any residue from the slab, they applied two coats of L&M Construction Chemicals’ FGS Hardener to densify the slab. The densifier was applied using a flood coat mop-on process. After application, the denisifier was allowed to gel up and the crew misted it with water. The densifier was reworked and then allowed to sit and gel up again, Weaver says. At this point the floor was flooded with water and then the excess was sucked up off the floor.

Once dyed and densified, Concrete Floor Systems continued dry polishing with an 800-grit resin and finished the project with an 1,800-grit abrasive.

Since the floor was in a cafeteria, Concrete Floor Systems had to make sure the dye and the polish would be protected from spills and etching. After finishing the polish with the 1,800-grit resin abrasive, the crew spray-applied two coats of L&M PermaGuard. “We used two coats to help resist any acid from spills,” Weaver says. The PermaGuard was applied in two thin coats that were worked into the floor using fiber cloth mops, Weaver adds.

This job required a lot of edge work. Concrete Floor Systems followed the same grit sequence to polish the slab’s edges. Instead of polishing the edges with the Prep/Master, the crew used a handheld grinder. “We dropped to medium cup to wet grind the edges,” Weaver says. “The concrete was hard and we had to work to get the edges.” This allowed them to make the edges blend before polishing the edges.

The dyed and polished floor was allowed to sit for one week before Concrete Floor Systems came back with a high speed burnisher to burnish and finish the floor.

Number of Years in Polishing: 8