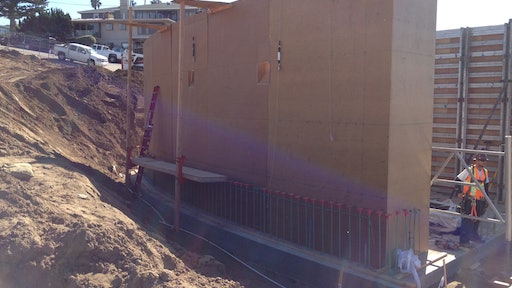 When visiting Moonlight Beach, a 16-acre state park in Encinitas, Calif., one will notice the wave like appearance incorporated within the new restroom and lifeguard garage which also serves as a public viewing deck. Considering that Moonlight Beach is carved out of the towering bluffs, the structure looks like it’s a part of the environment. The design of course, was no accident.

What made this project difficult was to create a bathroom and garage using a large vertical application of sedimentary walls. The walls were as tall as 25 feet; some positioned at an 80-degree angle as well as a radius.

Chris Klemaske, Project Development at T.B. Penick & Sons Inc., says, “We needed to figure out how to achieve the gradiation of the bluffs in the structural buildings. Adding another complexity to the project — the walls of the restroom facility were on a radius and we were laying integral colors and pouring on a radius, we needed the result in having the colors read natural.”

“This was one of my first times using concrete as a structural element with a building,” says Stephen Dalton of Stephen Dalton Architects, Solana Beach, Calif. “The idea behind creating the sedimentary walls was to layer the colors and in between colors, use different color hardeners to create the layering effects. The layers could be seated with fine sea shells. There’s really an archeological sense when you can see shells in the wall.”

The initial design took its cues from the ocean environment in the form of waves and sea shells. “The bluffs which surround the beach are protected, so we couldn’t touch those areas,” explains Dalton. “We needed to find a way to fit these buildings into the environment without blocking or dominating the natural beauty that is there. We decided to recess the buildings into the landscape and took what could have been an eyesore and added a viewing deck to the roof of the lifeguard garage.”

Concrete was the ultimate choice in determining the best way to create curving walls. Dalton says masonry block was an easy alternative, but says, “We couldn’t reproduce the fluidity of the walls which was a part of the design.” Additionally, Dalton liked the idea of being able to control the color in the concrete allowing the design to respond to the coastal bluffs which surrounded the facility.

“We decided to use two different colors and three different form treatments to create the unique surface appearance,” he explains. “We couldn’t have achieved that using other building materials.”

T.B. Penick & Sons Inc. uses a liquid color system, so if an architect or designer wants to use a custom shade or two of color, the contractor can do it. “In this case, we made several samples for Stephen Dalton Architects so they could determine what was going to work,” says Klemaske. “In some cases we made samples with white cement, Type 3 cement, and gray cement to see what it would do to the color.”

“Ultimately, we made 13 samples, which is not typical, but was necessary for the architect to be able to get the look they wanted to achieve. And we really wanted to see what would happen if we change the base material. Does it tone the color down? Does natural gray cement lend to for a ‘too dark’ material? We needed to see how that worked out.”

To achieve the look of the strata of a coastal bluff, the crew was told they would be using two neutral colors – Palomino and Mesa Bluff from Davis Color. “I’ve changed colors on sea walls before, I’ve just never done it on 15 ft. walls,” says Rich Robertson, a 43-year concrete veteran and superintendent at T.B. Penick & Sons, Inc.

If there is a common thread about the Moonlight Beach project, it’s the fact no one involved with the project had faced such challenging demands. “We needed to come up with a way to execute the pour and meet the design of the architect,” says Klemaske.

Robertson agrees, “The trickiest aspect of this project were the restroom walls which were to be positioned on a radius at an 80-degree angle.”  He ultimately met with an engineer to determine how to pour the walls. With the help of Tom Vargas at Atlas Construction Supply, San Diego, Calif., a custom form was designed to achieve the complex curved design.

“The forms actually became more like a puzzle,” says Robertson. “We had pieces laying everywhere. I had to lay them out to pick which form we needed to use.” The crew needed to take the wooden board forms and paint on the design from the architect to make sure the path could be followed when pouring. The crew lined the boards up side by side, no side was the same and it was critical to have the lines align from one section to the next.

The process of the pour became essential because the crew needed to conceive a way to pour and meet the design plans.

PVC piping as a means to pour

Robertson cleverly devised a technique between pours to not only place the dust- on color hardener in between the integral color pours, but also the pour itself.  “This was new to me. How are we going to get the material in the wall? I can’t drop material 15 ft. or 90 ft. for that matter” explains Robertson. “I decided to use a 2-1/2-in. PVC pipe and a 45-degree angle coupling at the bottom. There needed to be one guy feeding the bag with rock and shells while another would slowly move the PVC pipe while in a crane so they could follow the path as indicated by the forms. That was tricky, everything about it.”

Scofield Dust-On Color hardeners were applied, before another layer of seashells or sand, depending upon what was called for on the plans.

“When we started, we poured 10 hours a day. And really, we didn’t have a choice because of the thickness of the wall, the head pressure and other variances, we couldn’t stop and couldn’t have a cold joint,” Robertson says.

Everyone on the jobsite needed to stay focused. The crew utilized two Western concrete pumps with two different colors, switching back and forth between the two. “We did run into some difficulty on the pour sequence. We were only pouring four feet an hour and we had to make sure we weren’t getting too high with one color. It was a challenge to get the colors in the wall at the same time and making sure the colors were in the right spot.”

In this case, Robertson utilized three different Lithocrete retarders to help identify which layer would be applied next. “Thinking back on the process, at first, it was very complex,” Robertson says. “But once we did the first section, it was much easier than we thought it would have been.”

If walking around the building, the color change is noticeable, at least on a subtle level.  “A normal person may not notice the color change,” says Robertson. “However, a structural concrete guy who works on walls will notice right away. We had to make sure we had the retarders in the right spot and used them as gauges to see how high the color would come.”

“Moonlight Beach is a prime example of how we were able to use concrete to create a very fluid organic looking space,” Klemaske says. “The shapes the architect came up with; the seawalls are fluid. The materials are organic and natural to the space. It doesn’t look like an intrusion to the beach. If someone is looking for an example of an organic building, I believe this architect designed it beautifully.”