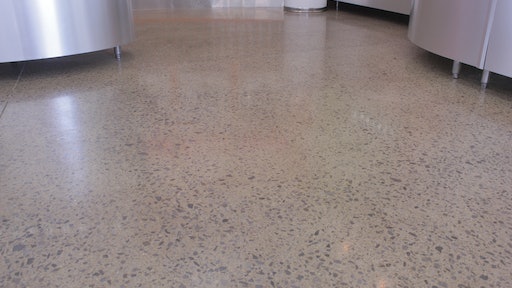 What should have been a fairly standard polishing job for Charlie Griffasi and his team at Concrete Innovations, Buffalo, N.Y. became much more as this concrete polisher discovered more than just aggregate in the concrete slab.

The project called for polishing the floors in a lobby and retail shop in a retail strip plaza. Griffasi was contracted to polish a floor with a salt and pepper finish using a gray dye.

“As a result we had to grind the floor to expose large aggregate and get through the majority of the foam,” says Griffasi. “We hoped the remaining foam would be less visible when blended in with all the aggregate.”

Using a Husqvarna 820 grinding machine, Griffasi says in general practice, his team performs all of their grinding to expose aggregate wet. “It controls dust, cuts better and helps your diamonds last longer. We do not flood the floor to produce a slurry. We use just enough water to create a past that solidifies by the end of the work day turning into ‘blocks’ of cement that we can pick-up by hand.”

In order to get a good sized exposure of aggregate, Griffasi grinds the surface down about 3/32 inch.

While the end result worked in the lobby area, it was not lost on Griffasi and his crew that a similar problem could exist in the retail shop. “We had to come up with a ‘Plan B’,” says Griffasi.  “We suggested starting work on the floor in the retail shop with 50-grit copper pucks with the hopes of not exposing the foam.”

While no guarantee was offered as to whether or not this solution would solve the problem, it would have also avoided adding costs to the project. The owner of the establishment agreed and decided to use acid stains for color.

“We started the project and after completing the polishing process with 50-grit copper pucks, 100-grit resin pucks and 200-grit resin pucks, we washed the floor, as is standard practice, and we were to ready to apply the stain.”

Although some foam was visible the owner approved and Griffasi and his crew proceeded with the acid stain application as there were no visible problems.

“When we arrived the next morning to neutralize the stain and proceed, we were surprised to find stains within the acid stain throughout the entire floor,” notes Griffasi. “Apparently the floor area was used as the project office during construction. Various products were stored there and something must have spilled while there.”

Since the floor was stained and there was no way to remove the stain, Griffasi was faced with only one alternative -- grind the floor again.

Because the exposed aggregate introduced more colors into the floor, the owner decided to abandon the original idea of a salt and pepper finish and chose a different color. An Ameripolish Shurlock Caramel dye was then applied, followed by a Vexcon Certi-Shine Clear densifier.

Griffasi says although the finished floor was not what the owner originally asked for, the owner commented the floor looked much better than what he had originally wanted.

Keys to Protecting a Slab