A Decorative Mix for Diamond Polishing 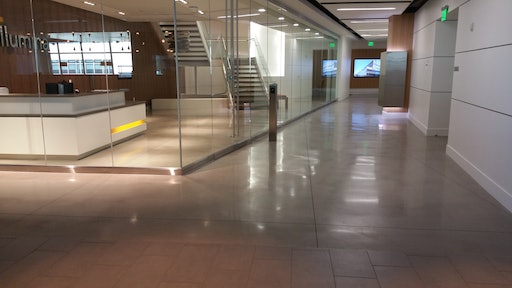 Diamond polishing overlay toppings is a significant part of the market so Diamatic, a manufacturer of diamond grinding equipment, decided to develop an overlay product with favorable polishing qualities. Its low shrinkage and hard wearing characteristics, gains strength quickly, and produces a high-polish surface.

When you are diamond polishing a floor there are a number of factors that will influence the final appearance:

For the above reasons owners and designers often specify overlay concrete products to solve problems. This isn’t to say that overlays don’t have problems, they do.

Clark Branum, ULTRAFLOR Program Manager for Diamatic, San Diego, California, says they started manufacturing diamond polishing machines, planers, scarifiers, scrapers, and dust extraction equipment for a world market in 2008. They started making material products when they realized that problems with existing floors could reduce the size of their market. At first they worked with companies that specialized in manufacturing and selling overlay products that included polymer admixtures but soon realized these products didn’t work well for diamond ground finishes. So they made the decision to develop their own product, one free from the issues listed above.

Surprisingly, Branum says they decided not to include portland cement in their mix, instead they turned to Type C fly ash with additives to manage setting characteristics. This type of fly ash has high-early strength gain characteristics, less shrinkage because the water requirement is only half that needed for portland cement (less cracking), it doesn’t produce calcium hydroxide as a by-product of hydration, and there is no Alkali Silica Reaction (ASR) resulting from its use.

The product name for this decorative overlay is “PC5614.” The “56” part means that a bag weighs 56 pounds while the number “14” means the yield is 14 square feet if you spread it 3/8 of an inch thick. It was introduced to the market after two years of development and testing. In addition to fly-ash the mix includes large aggregate (an additional 20 percent more can be added if desired), fine aggregate, and no admixtures. Only three quarts of water are needed for mixing.

How to install it

Branum says they use the International Concrete Restoration Institute (ICRI) surface profile recommendations for sub-floor preparation. Their requirement for this type application is a “Concrete Surface Profile 3” finish which can be achieved by grinding with 18/20 metal bonded diamond tooling. Next comes the application of an epoxy bonding material and broadcasting sand on the fresh resin to the point of refusal. After curing approximately 70 percent of the sand can be vacuumed away. The prepared mix is usually screeded using a gauge rake and smoothed once with a trowel. “It sets quickly and can usually be walked on within two to three hours. Diamond grinding can begin the following day but I like to test the surface with a rebound hammer to estimate strength before putting a 1,000 pound grinder on it,” says Branum. Polishing steps usually conclude with an 800 grit diamond finish.

Because PC5614 contains no portland cement, no calcium hydroxide is generated and therefore silicate densifier applications have no effect on hardness or surface density. The low water-cement ratio of the mix already causes the final product to be very dense. Compressive strengths of 5,000 to 6,000 psi are typical.

Billy Saul started Advantage Flooring Incorporated, Hanover, Maryland, 23 years ago to serve the Washington DC area. He says their focus is commercial flooring and they install any kind of floor finish—carpet, tile, linoleum, concrete, and others. Much of their work involves removing old product and installing new so preparation often involves removing glue residues stuck to sub-floors.

“We bought our first diamond grinder to remove residue from floors because it was fast,” he says. “That led to attending seminars to learn how to polish concrete and that resulted in a contract to diamond polish a 300,000 square foot floor, making us one of the largest floor polishing companies in our area.”

Saul says that a new school construction in their area suffered frozen concrete floors, causing them to spall. At first the school district wanted him to install a vinyl tile floor but he persuaded them to consider the Diamatic topping as a less costly option when maintenance costs were calculated over a 25 year period. The owner agreed and this turned out to be their first Diamatic topping application. They had installed polymer topping overlays in the past but there were enough problems with installations that they decided to discontinue their use.

Advantage Flooring describes themselves as a leveling and polishing company. Currently a popular look in their area is natural concrete looking floor finishes that meet up with glass walls. But many projects, especially those which have been rehabbed many times, have floors which are neither level or flat—glass walls must sit on level surfaces. So the Diamatic overlay finish has become an important product for them.

Saul cautions that you should plan placements with this product carefully. Polishing sequences should start the morning after placing and finishing because the strength gain is so fast.

“You can spend a lot more time polishing when slabs get too hard.”

Overlay floor treatments are becoming increasingly important to diamond polishing contractors and this product, which replaces portland cement with fly-ash, has some distinct advantages. There is minimal shrinkage (and cracking), increased stain resistance because it doesn’t react with many things that cause stains, it’s high strength contributes to high wear, and large aggregates in the mix disrupt scratch patterning. Saul says the appearance of patches and seams are minimized too, yielding blended continuous results.

Diamatic is being careful with their product. If you as a contractor want to install it, you have to get training and be certified first.

Construction has seen a surging acceptance of various forms of technology during the COVID-19 pandemic. But will it continue once the crisis is over?
Becky Schultz
March 3, 2021
Latest
Coatings & Sealants