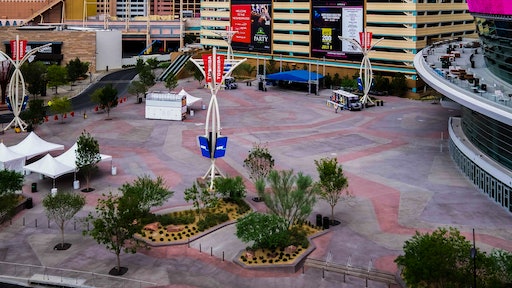 The new 149,472 square foot plaza for the Las Vegas Arena consists of random integral pastel color shapes meant to compliment the desert surrounding area that Las Vegas is built on. There are no right angles in panel shapes so the decorative concrete contractor, T.B. Penick, decided to hire a surveying company to set points for panel corners to facilitate forming operations.

Dan Schaaf, Associate Principal of Populous, Kansas City, Missouri says his firm was the architect for the project. “We wanted our design to complement the look and character of the local landscape, creating transition from the desert to “The Strip.” He added that there was a city park under construction adjacent to the plaza and they wanted to complement the design and worked hand-in-hand with the architect for that project.

The pavement in the arena consists of concrete panels in three different colors. Schaaf says the ones they chose were meant to match the colors of the natural sandstone and dessert landscape of the area. “In the end we wanted our design to complement the local landscape,” he added. The color shift between the panels is meant to be subtle, further reflecting the character of the desert.

The panels join at common form lines and have random shapes. There are numerous planters and planter walls around the perimeters of the plaza as well as trees with grates in walking areas. The central portion of the plaza is a large, open expanse that allows the arena to be used for special events.

The native sandstone boulders placed around the perimeter of the plaza also provide security for the area.

Working Around the Schedule

According to Rigo Macias, Penick’s superintendent for the project, the very tight schedule turned out to be one of the greatest challenges for Penick. Work began in December of 2016 and was completed at the beginning of April, shortly before the opening of the arena. This was barely enough time to complete the work, especially when coordination with other trades and planter wall construction added to the complexity. Each panel in the plaza had to be formed and cast separately, limiting their placements to about 4,000 square feet per day at best. Their crew size for the project was as many as thirty people and work days often included overtime. Weber added that work in the two months prior to the opening averaged 65 hour weeks.

Working with the Complexities

While many projects allow workers to start placing concrete at one end of a project and then work their way to the other end, one day’s concrete placement on this job often occurred in areas over a large expanse. Also, it’s easier to place just one color of concrete per day but they often needed to place more than one color.

Setting forms was the greatest challenge Penick faced because there were many angles for every panel, none being a right angle and there were hundreds of these panels to accurately locate in the plaza. Matching locations on plans was critical and Penick wisely decided to utilize a surveying company to do that work. They placed pins at all the corners for each panel, speeding up the form-setting process.

Laying Out the Project

Weber says Penick spent the first three weeks working out drawing layouts to locate panels in the plaza landscape. Their layouts were provided to the surveyor who loaded digital copies into their robotic total station (see August/September 2016 issue of Concrete Contractor magazine “Robotic Total Station Update” article, page 44) to locate all the angles for each panel.

Macias says that on days when ambient temperatures were higher, they increased concrete setting times by ordering concrete with retarding admixtures. On colder days they ordered concrete batched with hot water to reduce initial setting time. Almost all concrete for the project was pumped and this meant coordinating placements to minimize changing the location of the pump or cleaning it in order to place a different colored concrete. Once placed, workers floated the concrete and finished it two or three times by hand, depending on conditions. Macias adds that when the concrete was at the right stage of hardness, workers sprayed a low profile exposed aggregate retarder on the surface, covered the work, and left it overnight. The following day workers scrubbed the concrete with water, using buffing machines to remove a thin layer of paste, exposing only the sand in the mix. The effluent was picked up with a wet-vacuum, being careful not to get the sub-grade wet around the slab. This process produced a light non-reflective sand finish. When the work was sufficiently dry the final step involved the application of a penetrating sealer which left the surface without a sheen.

How It All Turned Out

The city owned park adjacent to the plaza was constructed at the same time. Even though this pavement was constructed with granite pavers, the colors and texture of the plaza pavement are complementary and create the feeling the two areas were designed by the same architect.

Schaaf says the owner wanted the project to be LEED certified so the three colors, along with the surface texture, had to meet solar reflectance test requirements.

Often time’s colored pavement has a whitish cast due to a thin calcium carbonate (efflorescence) film buildup that occurs during the curing process, especially when sealers which coat the surface aren’t applied. But the efflorescence on this project will quickly wear away as walking traffic and rain wear it off, enriching the color appearance.

Discover ways to reduce your environmental footprint and save money.
Jun 1st, 2021
Latest

Without the space needed for a typical underground detention system, one N.C. contractor still needed a solution for stormwater runoff in a parking lot and found a solution with permeable interlocking concrete pavers (PICPs).
Belgard, part of Oldcastle, APG
May 13th, 2021

Concrete cracks, it's a fact. Download this infographic of professional advice on designing contraction joints in your concrete slab and do what you can to control the cracks in your concrete.
AC Business Media
May 7th, 2021

When it comes to imparting color on a concrete surface, understanding the product options is critical in order to achieve the finished look your customer desires
Ryan Olson
Apr 27th, 2021

TWINTIER® technology allows ironworkers to get the job of tying rebar done quicker. Form up to 4,000 ties on a battery charge. Use the exact amount of wire need for each tie. Save time. Save money.
Jun 1st, 2021

Understanding the difference between concrete dyes, stains and pigments is essential when deciding which to use for colored concrete. Use this high value asset infographic to make the correct decision.
Apr 20th, 2021

There are five popular concrete application techniques that you can master and offer as a concrete staining company. Let us look at these popular stain application styles.
Adrian Cruz
Apr 19th, 2021

Understand the processes, the variables, and the differences between each category of a processed concrete floor. Let's go over what a concrete contractor needs to know about grinding, honing, and polishing concrete.
Jim Cuviello
Apr 19th, 2021

Many of the largest retailers in the U.S. have been specifying and/or will soon be specifying certified individuals on new construction projects, as good quality control can result in significant cost and time savings.
American Concrete Institute (ACI)
Apr 14th, 2021

What the finished floor will look like tends to be important to the floor owner. Knowing the floor and your sealant will make all the difference.
Jonathan Kozlowski
Mar 29th, 2021

If applied in cooler temperatures, the epoxy will not reach a complete cure or achieve its designed physical properties — ultimately leading it to fail prematurely. Here's what you can do to be successful.
The Euclid Chemical Company
Mar 17th, 2021

Reviewing some of the common problems with stamped concrete and a few techniques you can try the next time you are faced with a decorative repair and restore challenge.
Deco-Crete Supply
Mar 8th, 2021