Understand the processes, the variables, and the differences between each category of a processed concrete floor. Let's go over what a concrete contractor needs to know about grinding, honing, and polishing concrete. 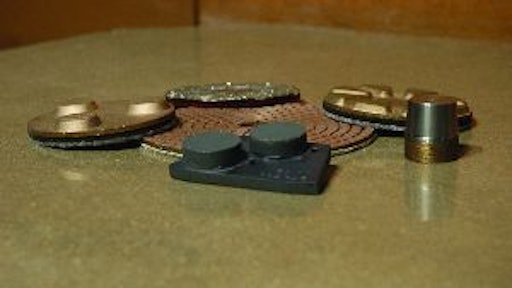 The concrete polishing industry has grown very rapidly. Although concrete polishing and other concrete processing steps have been performed for about a decade-plus, it has only been recently that architects, engineers, property owners, interior designers, and general contractors have taken increased notice. Those contractors who get involved now and take time to understand the technicalities and variables of the process will be rewarded as market demands expand.

As with any other new or growing industry, there are challenges contractors must face. Some new contractors getting into the processing business think polishing concrete is simply flopping abrasives on and off the bottom of a machine. In reality, the process is quite technical and when mixed with multiple variables beyond a contractor's control, results can potentially suffer significantly if a contractor does not have the proper experience and know-how to overcome these obstacles. There is also a slew of variables within a contractor's control that he or she also must learn to manage.

Additional problems include contractors who base their pricing on what other concrete processors are charging instead of basing their pricing on expenses plus profit. I also see a lack of formal technical training for contractors and a significant lack of understanding by the customer in what concrete polishing actually is.

To see the industry grow in the correct direction it's up to contractors to seek out the proper training, educate themselves on concrete processing as much as they can, and educate their customers on what proper processing means, the time it entails, and how much a proper job should cost.

"Concrete polishing" is frequently used out of context. Most often the correct terminology is "concrete processing," which describes a process not much different from other industries putting material such as stone, metal, and optical lenses through a similar process.

Currently, the industry breaks down the process of concrete polishing into grinding and polishing while some simply use the word polishing for the entire process. The process of polishing concrete consists of three consecutive categories:

Each category is then broken down into multiple steps, consisting of consecutively finer grit abrasives. During this process, a densifier or hardener is applied that is absorbed into the concrete creating a chemical reaction that makes the concrete more dense and hard. 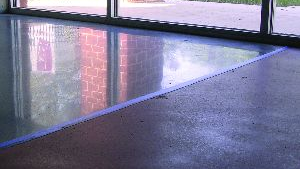 Defining the Categories and Steps

Ground concrete is the lowest category of steps of a processed concrete surface. Any grit abrasive (if the abrasive medium is categorized in terms of grit) from approximately a 50-grit resin and below is considered a grinding step. A ground concrete surface has a flat appearance with no or very slight reflection and may at times have a low sheen.

Honed concrete is the next category of steps above ground concrete in the processing system. Any grit abrasive from approximately a 100-grit resin to a 400-grit resin is considered a honing step. A honed concrete surface has a matte appearance and/or slight clarity of reflection that has a low, medium or high sheen.

Polished concrete is the highest category of steps of processed concrete. Any grit abrasive from approximately an 800-grit resin and above, typically to a 1,500 or 3,000 grit, is considered a polishing step. A polished concrete surface has clarity of reflection like a mirror and has a glass-like finish.

The process of grinding, honing, and polishing concrete is more technical than most realize. There are many pre-existing variables that can affect the end results of the process performed. Some of these variables are within the contractor's control, such as the quality of your equipment and abrasives and the motion and speed at which you operate your equipment. Others are beyond a contractor's control, such as levelness and flatness of the floor or the concrete mix design used. Knowing how to contend with these variables is the difference between a craftsman who is detailed and results-oriented and a contractor who simply goes through the motions.

If you know a slab will be polished before it is poured, whether in a residential or commercial setting, suggest a polishing-friendly mix design and floor flatness rating to the general contractor or owner. The customer will in turn get a better polishing result and possibly a lower cost to finish the floor.

There are three visual facets of processed concrete:

Contractors can cut the surface to any one of a number of degrees, including surface cream, fine aggregate, medium aggregate, or large aggregate. These layers are a key element when processed concrete. The goal is to refine to and remain within the desired layer and make it as consistent as possible throughout. These layers often can vary in thickness through the surface of the slab.

Additional decorative enhancements may also be included in the process, including coloring with integral, acid-stained, and water- or solvent-based stains and dyes; saw cut patterns; and engraving. 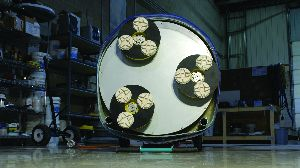 The Grinding, Honing and Polishing Processes

Full refinement of the concrete surface extends beyond replacing the scratch pattern created by the previous grit abrasive with the next progressively finer grit abrasive. Once the scratch pattern has been replaced from the previous grit, more refinement of the concrete can be achieved. Not performing full refinement from one progressively finer grit to the next will not produce the best possible results, not allow the floor to have its maximum durability and will cause the surface to prematurely wear.

It is heavily recommended that you not skip a grit in the processing sequence, and when transitioning from metal bonded abrasives to resin bonded abrasives the first resin bond grit abrasive used must be one grit lower than the last metal grit abrasive used. In rare situations, you may be able to skip a grit or not drop back a grit, but it can never be used as a standard rule. If you do attempt to skip a step in the polishing process, you should perform comparison testing in several areas of the slab to determine what type of quality you are giving up by skipping a grit or not dropping back a grit.

It will be up to the contractor to determine at what grit to start the process since he or she knows the goal to reach. The following example is an accepted grit sequence depending on the concrete surface given. 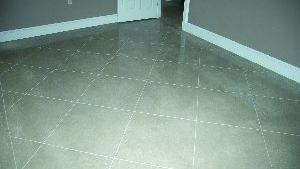 Start with a metal 50 or 70 grit, two or three segments per abrasive. Then, move up to a 100 or 120 grit with six segments per abrasive. Switching from a two or three segment to a six segment abrasive allows the concrete surface to be closed up and refined as quickly as possible to obtain the best clarity of reflection and durability. The more surface area an abrasive has, the faster the surface of the concrete will be closed. There are situations where you may need to go higher in metal bond abrasives and situations where metal bond abrasives are not needed.

All of the resin bonded diamonds are full-faced diamonds that close up the surface of the concrete quickly to obtain the best clarity of reflection and durability. Depending on your desired results, you may stop at any grit.

The concrete would dictate at what grit a densifier would be applied. There are three types of densifiers that are most commonly used—sodium, potassium, and lithium. Each manufacturer has specific directions for the application that should be followed.

Just because two contractors have the same grit sequence specified, the outcomes they achieve polishing on the same concrete can be drastically different. Remember all the variables that are within the contractor's control and work with them for the best results.

Jim Cuviello has been in the concrete polishing industry since 2002. He is the owner of Cuviello Concrete in Stevensville, Md., and a founding member of the Concrete Polishing Association of America.

This article was originally published January 2008.

Variables Within the Concrete Polisher's Control

There are many variables a contractor must deal with on a polished concrete project. An experienced polishing contractor who knows how to deal with these variables will have success on his or her job.

Variables within the concrete polisher's control:

Variables NOT within the concrete polisher's control

How to Apply Concrete Dyes When Grinding and Polishing

Not All Diamond Abrasives Are Created Equal

A Scientific Approach to Polishing Concrete