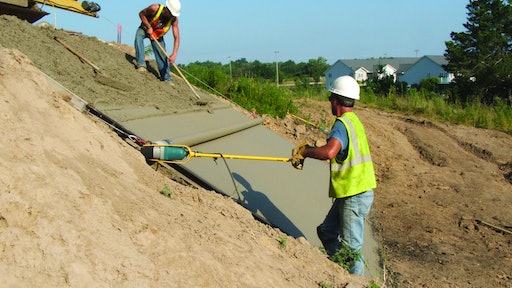 Pete Belange, field superintendent at Rieth-Riley Construction, Lafayette, Ind., believes in working smart. In the current economy, he has managed to maintain employees while increasing projects. He credits part of this success to the company's consistent use of a roller screed. "We don't have to work harder," Belange says. "We have to work smarter. Smarter is buying such tools as the Spin Screed."

Belange purchased his first Spin Screed in 2002 after reading an ad in an industry magazine. The first project he used it on was a mile-long, two-lane highway without a curb, gutter and sidewalks. His crew had to convert it into a four-lane highway installing a 5-foot wide walkway on one side and a 10-foot wide path on the other.

"I mainly bought the Spin Screed for the 10-foot wide path," Belange says. "It picked up my production over 35 percent the first day, and the guys weren't as tired at the end of the day."

Belange found such success using his first roller screed that he purchased a second in 2008. On some projects, Belange uses the roller screed every day — sometimes three or four times a day. He has variable widths of tubes taking about 3 to 4 minutes for one worker to change.

Recently, Belange used his roller screed on a project for the Water Treatment Plant in West Lafayette, Ind. The parking lot consisted of pervious and impervious concrete working together. Belange’s crew poured the pervious parking areas in order to drain surface water without putting in a lot of drain piping. Next to the pervious parking areas the crew poured impervious concrete.

The jobsite was located along a river in a hilly area producing severe grade elevations. Because it was such a severe grade, Belange says the vibratory screed would have made the concrete crawl down as it moved. Instead, Belange used the roller screed to keep the material where it was placed.

In this situation, pours tend to be smaller and more frequent with pervious than impervious, but the ease of the roller screed allowed them to pour less frequently with larger sized pours, Belange says. This saved the crew tremendously on time. "We were gaining a whole 50 percent every pour," he explains. "When you do that you're buying time and making profit." Rieth-Riley poured about 4,000 square feet per day.

The project was completed in four weeks, two weeks ahead of the projected schedule. As a result, Rieth-Riley was able to come in with a profit margin 10 percent more than projected.

Rieth-Riley rents several pieces of equipment such as backhoes, skid steers and rollers. Each job they finish ahead of schedule allows them to rent that equipment for a shorter time and saves the company money, Belange adds.

"I need to buy time, and I have to create jobs," Belange says. "We can bid jobs lower and secure more work to keep more people working to utilize the rest of the company."

Completing a Circular Concrete Pour with a Roller Screed

Comprehensive verification reports allow suppliers to prove to contractors that their concrete was delivered on time and according to specification.
Coretex
Jun 10th, 2021

Introduced at World of Concrete 2021, the device is specifically designed to assist operators with the lifting of a pneumatic jackhammer
Makinex Construction Products
Jun 8th, 2021

The WB-3200's compact design allows working height as low as 18-in. from grade and the adaptive frame design allows for any attachments to be mounted on either side.
Miller Formless Co.
Jun 8th, 2021

Contractors can work on pours ranging from a 22-ft.-wide street to a 5-ft.-wide sidewalk in the same day with just a few sections of pipe that can fit in a standard pickup.
Curb Roller Manufacturing
Jun 8th, 2021

Results of a Southern California freeway survey that set out to determine the short-term and long-term performance of rapid strength concrete for the potential repair and restoration of highway infrastructure work.
International Grooving & Grinding Association
Jun 2nd, 2021

Steps you can take to pour flat and level floors under the unique challenges of working three, four – or 25 – stories up
Jonathan Kozlowski
May 26th, 2021

A quick overview of the types of concrete wedge anchors, the correct depth to drill, and steps for installation.
Concrete Fasteners Inc.
May 21st, 2021