Concrete Technologies on the Horizon 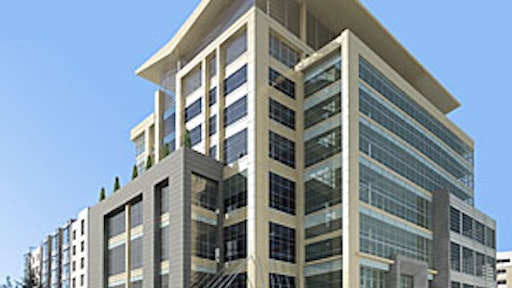 Hycrete, Inc.
Hycrete, Inc. is an innovative technology company based in Carlstadt, New Jersey that aspires to "fix the biggest problems associated with concrete and concrete construction."

One of concrete's major flaws is that capillaries and cracks behave like a porous matrix that readily allows the re-entry of water. Water penetration, especially if carrying dissolved salts, leads structural damage, including freeze-thaw degradation, corrosion of embedded steel, and leaking. Hycrete shuts down absorption of water by creating chemical bonds that block the spaces within concrete making them hydrophobic and the concrete itself hydrophobic.

Traditional waterproofing are coatings and membranes are made of rubber, plastic or asphaltic materials. Membrane systems pose several challenges because they are difficult to apply and repair, are time consuming, and more expensive. Indeed, concrete waterproofing is the most litigated aspect of construction due to frequent issues with materials and workmanship.

The Hycrete system allows waterproofing to be done throughout the entire volume of concrete rather than just on the surface layer. Hycrete's "green" advantage comes from replacing tons of non-hard to recycle membrane materials with a relatively small amount of Cradle-to-Cradle environmentally certified concrete admixture.

Hycrete and companies like Hycrete are creating "green" alternatives to traditional products and solutions. These breakthroughs should have tremendous adoption rates and support to prove out their technologies. In reality, adoption of new technology in the construction sector is very slow as corporations and government agencies want to see new technologies in place for years or even decades before taking on a perceived "risk" of adoption. David Rosenberg said "If a patent has a twenty year life and typical rates of adoption in our industry are twenty years, then what does this say about the incentives for companies to invest in bringing innovative technologies to market? This is a serious problem from an industry that needs to embrace change. Today there is a tremendous opportunity as outside investors look at the inefficiencies of our industry as opportunities. However, unless the length of time for adoption shortens and companies like ours win big, then the outside money will stop flowing and investment will decrease and innovation will slow."

The new administration and evolving mindset in this country bring a real opportunity to build for the future by improving transportation efficiency, designing for enhanced lifecycle, decreasing waste, using sustainable materials and creating jobs in the cleantech sector. However, traditional approaches and extreme attitudes toward innovative technologies must become more progressive to truly take advantage of this opportunity.

iCrete.
More than ever, owners, engineers and architects are requiring performance guarantees and faster delivery times on construction projects. As a result, construction companies and concrete contractors often take responsibility for circumstances not entirely in their control -- especially when it comes to concrete.

Concrete is often inconsistent from batch to batch, making placement difficult and creating longer work cycles caused by increased set times. And if concrete fails to make strength or finishes poorly, contractors may need to rip out and replace the material—further delaying the project and increasing costs. With razor thin margins, non-performing concrete can put concrete contractors and construction companies in a difficult and somewhat unpredictable economic situation.

To stay competitive and profitable, construction companies and contractors need to work with concrete that is consistent batch after batch, arrives on time, is easy to place and finish, and meets the desired performance requirements.

iCrete is a concrete technology company that is transforming the construction industry by shaping the next generation of concrete production and associated technologies. iCrete uses a patented mix design technology that optimizes concrete for efficiency, workability and strength while lowering greenhouse gas emissions. iCrete does not produce concrete, but rather licenses its patented technology to precast/pre-stressed and ready mix concrete producers to deliver a better-performing concrete that is more economical and environmentally friendly than conventional concrete.

Calera Corporation
Calera Corporation, based in Los Gatos, California, is a carbon-sequestering company applying proprietary carbon-capture technology to address the problem of carbon emissions from fossil fuels and cement production. The product of the process is a line of carbon-negative building materials with a variety of product advantages.

The Calera process starts with a water source and captured waste CO2 from powerplant flue gas or cement manufacturing. The CO2 in the flue gas is converted into mineral carbonates. A solid-liquid separation and dewatering step results in a material that is used to make Calera products. A portion of the material is spray dried using the heat in the flue gas to produce a supplementary cementitious material (SCM) similar to fly ash. Once dried, the Calera SCM can be used to replace a portion of the portland cement. Material that is not spray dried is used to produce synthetic fine and coarse aggregates.

By following the equation below, it is easy to determine the Concrete Carbon Footprint of a certain mixture. By using Calera Fine Synthetic Aggregate, and replacing as little as 20 percent portland cement with Calera SCM, it is possible to get to a carbon neutral concrete.

Keeping with the same equation it is possible to get a "carbon negative" concrete (shown in image). This is achieved by using a 20 percent Calera SCM, 20 percent fly ash, 60 percent portland cement, and replacing all the aggregate with Calera fine and coarse synthetic aggregate.

Calera's products are currently being developed at a pilot plant in Moss Landing California and are being tested up to the appropriate industry standards.

VERDiCT
Nanomaterials Give Concrete Longer Life: Engineers at the National Institute of Standards and Technology (NIST) are patenting a method that is expected to double the service life of concrete. The key, according to a new paper*, is a nano-sized additive that slows down penetration of chloride and sulfate ions from road salt, sea water and soils into the concrete. By reducing both maintenance costs and the catastrophic failure of concrete structures, the new technology potentially could save billions of dollars and many lives.

While concrete has been around since the time of the Romans, it is time for a makeover. The nation's infrastructure uses concrete for millions of miles of roadways and 600,000 bridges, much of which is in disrepair. In 2007, 25 percent of U.S. bridges were rated as structurally deficient or functionally obsolete, according to the Federal Highway Administration. Damaged infrastructure also directly affects large numbers of Americans' own budgets. The American Society of Civil Engineers estimates that Americans spend $54 billion each year in vehicle repairs caused by poor road conditions.

Infiltrating chloride and sulfate ions cause internal structural damage over time that leads to cracks and weakens the concrete.

Past attempts to improve the lifetime of concrete have focused on producing denser, less porous concretes, but unfortunately these formulations have a greater tendency to crack. NIST engineers took a different approach, setting out to double the material's lifetime with a project called viscosity enhancers reducing diffusion in concrete technology (VERDiCT). Rather than change the size and density of the pores in concrete, they reasoned, it would be better to change the viscosity of the concrete at the microscale to reduce the speed at which chlorides and sulfates enter the concrete. "Swimming through a pool of honey takes longer than making it through a pool of water," engineer Dale Bentz says.

They were inspired by additives the food processing industry uses to thicken food, and even tested out a popular additive called xanthum gum that thickens salad dressings and sauces gives ice cream its texture.

Studying a variety of additives, engineers determined that the size of the additive's molecule was critical for them to serve as a diffusion barrier. Larger molecules such as cellulose ether and the xanthum gum increased viscosity, but did not cut diffusion rates. Smaller molecules -- of less than 100 nanometers -- slowed ion diffusion. Bentz explains, "When additive molecules are large but present in a low concentration, it is easy for the chloride ions to go around them, but when you have a higher concentration of smaller molecules increasing the solution viscosity, it is more effective in impeding diffusion of the ions."

The NIST researchers have demonstrated that the additives can be added directly to the concrete mixture as current chemical admixtures are, but that even better performance is achieved when the additives are mixed into the concrete by saturating absorptive lightweight sand. Research continues on other materials as engineers seek to improve this finding by reducing the concentration and cost of the additive necessary to double the concrete service life.

A non-provisional patent application was filed in September and the technology is now available for licensing from the U.S. government; the NIST Office of Technology Partnerships can be contacted for further details.