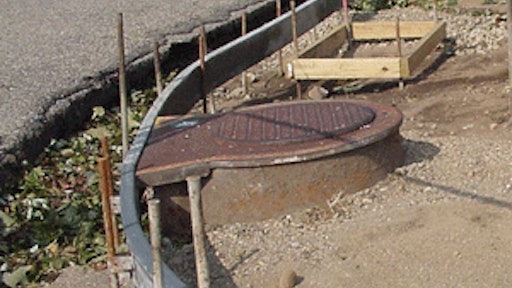 Ohio is among the many states that are re-doing their sidewalks to include curb ramps with a special truncated dome pattern that improves accessibility for people with disabilities. A major contractor, Shelly & Sands, is using flexible PolyMeta Forms to simplify and standardize forming of the curb radius at the crosswalks where these ramps are being constructed.

Shelly & Sands, Inc. serves eight major markets in Ohio, Indiana and West Virginia and paves more roads in Ohio than any other company. In addition to paving and other concrete work, the firm's materials divisions supply aggregate and asphalt.

Recently the firm received major contracts to install the new curb ramps in several Ohio cities. At the crosswalks where they are installed, it is necessary to create curves in the curbing that adjacent to the ramps and blend in with the adjacent straight curbing. Previously, the company used wood and Masonite to construct the curve forms, but these had some shortcomings. Superintendent Terry Parry explains, "Wood was inflexible, and on the tight curves, where we had to use Masonite, we had to pin it every six inches. It was hard to clean up, and we were constantly piecing it back together because it would break." He adds that the cost of lumber for wood forms was constantly increasing.

Recently, Shelly & Sands started using PolyMeta Forms, from Metal Forms Corporation, Milwaukee, a specialist in manufacturing forms, screeds and stakes for the concrete construction industry. The HDPE (High Density Polyethylene) forms are light yet durable, easy to clean and transport, and can be used over and over. The cost of wood and Masonite forms was ongoing because of breakage and the limited number of times they could be used. Cleaning them was time-consuming, while the PolyMeta forms are easy to clean.

He started using the forms after seeing them demonstrated at the 2007 World of Concrete convention in Las Vegas. They were purchased from Contractor's Materials Company in Cincinnati. In the first season, the company has used them to pour close to 1,500 curb ramps. They also are being used in conjunction with the new Midfield Terminal at the Indianapolis airport. Parry says, "They just make the job better because they fit better."

The forms incorporate sliding pin pockets that can be placed easily wherever they are needed, which is a big advantage when working with curves. Parry notes that they are using radius forms, and they plan to add straight forms to match up with them next year. He concludes, "From my experience so far I can't say enough good things about the forms."

How to Create a Niche for Crosswalks