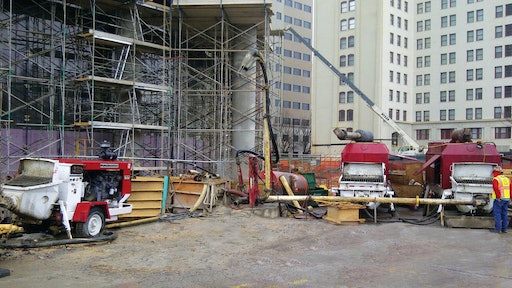 C&C Concrete Pumping enlisted two of its BSA 14000 HP-D 8-in. trailer pumps and one Thom-Katt TK 50 high pressure shotcrete/concrete pump to pump the 120,000 cu. yds. of concrete for the project.

Rising 850 ft. above downtown Oklahoma City, OK, is the Devon World Headquarters Tower, which is expected to be the tallest building in the state once completed. Part of the city's "Core to Shore" downtown redevelopment project, which aims to redevelop 750 acres of underutilized land between the core of downtown to the shore of the Oklahoma River, the building will be the new headquarters for Devon World Headquarters, LLC, a subsidiary of Devon Energy Corporation and the largest U.S.-based independent oil and natural gas producer.

The building will comprise a 130-ft.-tall metal and glass rotunda, a five-story podium building and a 10-story above- and below-grade parking garage. The 1.7 million-sq.-ft. structure called for an estimated 120,000 cu. yds. of concrete.

"Twenty-four floors of the building needed to be occupied by the end of 2011 and the remaining 26 floors by summer 2012," explains Laszlo Fazekas, national marketing director of C&C. "Consequently, a high-early concrete mix was specified to meet this demanding pumping schedule and to also combat the freezing weather conditions and reduce finishers' overtime. Due to these circumstances, it meant we needed to supply the most efficient and dependable concrete pumping and placing equipment.

"From our experience of completing 100-story plus high-rise buildings with our Putzmeister equipment, we knew it would pump the concrete mix design under extreme pressures in the most efficient manner possible," says Fazekas.

"The two trailer pumps were set up side by side," notes Pepi Cancio, president of C&C. "One was utilized for pumping on site while the other was on standby in the event extra support was needed."

For most of the floor pours, the pedestal was bolted directly to a cross-base, which was mounted to the structure's climbing core wall forming system. Once the climbing core wall forming system was removed, a 40-ft. tower was mounted to the cross-base - except this time, the cross-base was bolted to a newly poured concrete deck in the roof as per the guidance of Putzmeister engineers. This method allowed one placing boom mounting system to be used as both a climbing and static mounting system.

"The placing boom and pedestal, with a combined total weight of 18,600 lbs., was flown to and from the tower with ease," says Cancio. "Positioning the boom on the pedestal also proved to be a simple process."

While the trailer pump and placing boom were used for the horizontal flatwork and vertical elements, the TK 50 was used for miscellaneous concrete placement needs, including stairs, pour backs and pop-ups.

According to Fazekas, a 24-hour pour schedule was implemented from the time the equipment was initially set up until the top-off of the structure in summer 2011.

"The horizontal element pours were done at night while the vertical elements were done during the day," says Fazekas.

"There were three slab pours per typical floor," adds Cancio.

High-pressure, low-output pumping was a necessity due to the heights that had to be attained with a challenging concrete mix design. Capable of pumping up to 133 cu. yds. per hour, the BSA trailer pump, which is powered by a 500-hp Caterpillar engine, averaged outputs from 50 to 90 cu. yds. per hour.

"The output varied due to the density of the mix design and the weather," explains Cancio. "The mix included superplasticizers to meet pumpability and workability requirements needed for concrete finishing purposes, and dense aggregate to meet the strength demands of the project. In the winter, this mix was more challenging to pump because the aggregates could not be maintained at Saturated Surface Dry (SSD) condition due to freezing temperatures when aggregates absorb lots of free water, leaving us with a somewhat sticky paste."

With the BSA's closed-loop free-flow hydraulics, C&C was able to provide a smoother and more controllable pumping method in the varying weather conditions on the site. "As part of the free-flow hydraulics design, the pump has a fully adjustable volume control to allow for very slow pumping while retaining full concrete pressure of 3,190 psi," notes Jovanny Cabral, general manager for the C&C Dallas, TX, branch.

"Able to pump up to 54 cu. yds. per hour at 1,150 psi, the TK 50 features a gradual reduction from hard-chromed material cylinders to the outlet, providing an even flow of material, and ultimately providing us longer life of the pump," says Cabral. "As an added bonus, the pump's angled hopper is easy to fill, clean and maintain, which helped us stay on track with the job's aggressive pour schedule."

C&C's four-arm Multi-Z placing boom placed the concrete precisely with no delay. "Capable of reaching up to 108 ft. 7 in. horizontally and 116 ft. 4 in. vertically, we never had to worry that it wouldn't be able to reach the exact point of placement," says Papito Saavedra, the head of placing boom operations for C&C for the project.