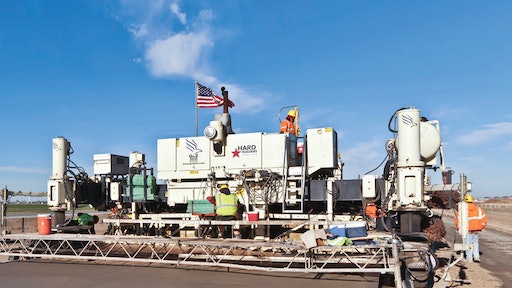 Much of Interstate 70 in western Kansas had reached the end of its life. It was a full-depth asphalt pavement; sections ranged up to 20 inches deep. The most recent asphalt treatments had lasted just five to seven years, said Andrew Gisi, geotechnical engineer with the Kansas DOT.

The state wanted something that would last longer, so they chose a 6-inch bonded concrete overlay - 1.45 million square yards of it to be exact. KDOT used Colorado's pavement design criteria and system in designing its 6-inch overlay on asphalt. The overlay is sawed into panels that are 6-feet square – and such overlays have provided Colorado with 10 to 12 good years on heavily traveled roads and remain in service.

Gisi says that Kansas expects to get 20 years from the "6 x 6 x 6" overlay, possibly with some panel replacement at mid-life.

Using a Guntert & Zimmerman S850 Quadra four-track paver to pave 30 feet wide, the contractor averaged just 8.5 inches/mile on a zero blanking band over the two projects. "We averaged about 1,800 square yards per hour, or maybe a little better," said Robert Kennedy, quality control manager for Koss. Two belt placers spread concrete in front of the paver, which helped boost production allowing Koss to dump two trucks at once. Each project last year had its own batch plant, and typically 15 trucks hauled concrete to the site.

For nearly two miles of pavement last year, Koss paved with a Leica Geosystems stringless automated control system. The automatic paver control system bases its guidance on a digital terrain model – a digitized 3D model of the pavement – that is entered into a computer onboard the paver. The paver also has two prisms, mounted above the machine which provide a reference for the machine location for the two robotic total stations set up on tripods ahead of the paver. The prisms on the paver have a relation to points on the concrete paver's pan.

When setting up the two total stations, a technician back-sights each of them to known control points. That fixes the location of the total stations relative to the runway's digital model. The total stations can then "see" two prisms on the paver and communicate to the paver – by free-wave radio – the paver's precise location. The on-board computer then processes the differences between the actual paver location and the digital terrain model. Knowing those differences, the computer controls the paver pan location automatically.

"The smoothness was good with the stringless system," Kennedy said. "But some of them [the crew] have been paving for 20 years, and to not have that stringline to check grade was a little concerning for them."

Kennedy said one advantage to the milling and concrete overlay process was that Koss could correct roadway slopes and transitions into and out of curves. With so many asphalt treatments over 40 years, the slopes had gone awry. "We could go in there and pave back to the exact slope and correct all of those geometric issues," Kennedy said.

Koss' smoothness numbers last year were remarkable. The Missouri-Kansas Chapter of the American Concrete Pavement Association (ACPA) gave Koss the "Smoothest Day Paving Award" for a 4,500-foot section on which the contractor hit just 5.4 inches of deviation. On every section of concrete pavement last year, Koss earned a smoothness incentive from the state.

It is easier to achieve low smoothness numbers on the thinner 6-inch pavement because the paver is not pushing a big head of material. "You can push the small head of mud, and you are not extruding a lot of concrete either," Kennedy said.