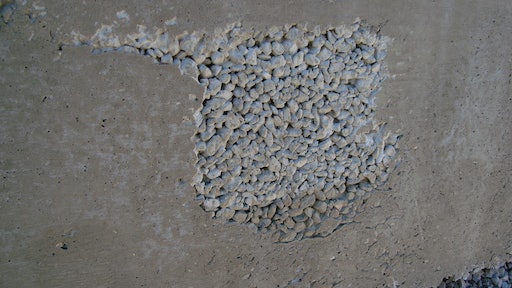 Honeycomb, subsidence cracks, cold joints and excessive surface air voids are common surface blemishes associated with ineffective concrete consolidation. In addition to being unsightly, formed surfaces with blemishes may not conform to the requirements of the contract documents. When this occurs, surface blemishes become defects and subsequently must be repaired. Along with the expense of repairing surface defects, it is difficult and sometimes impossible to make repairs match the color and texture of the surrounding concrete. By understanding the causes and using effective consolidation techniques, contractors can avoid repair costs and aesthetic disputes due to consolidation-related surface blemishes.

Many times, untrained operators only level the concrete and fail to complete the de-aeration phase of consolidation resulting in unwanted surface blemishes. It is important for operators to understand the stages of vibration and indicators of well-consolidated concrete.

Honeycomb occurs when mortar fails to completely fill the spaces between the coarse–aggregate particles leaving irregular voids or stony zones in the concrete. Typically, honeycombing occurs along the form face and in many cases is limited to the region between the form face and reinforcement. Causes include: congested reinforcement and narrow forms, insufficient paste due to segregation of the concrete, improper fine to coarse aggregate ratio, improper placement procedures (excessive concrete free fall and lift thicknesses), trying to place stiff and dry concrete, difficult construction conditions, and insufficient consolidation efforts.

Cold joints are different than lift or layer lines. Lift lines occur when successive lifts of concrete are not completely knitted together. In many cases, lift lines occur because of color variations between loads of concrete and do not indicate there is a joint or discontinuity in the concrete.

In contrast, a cold joint is a discontinuity between two lifts of concrete. They occur when, due to a concrete placement delay, the earlier lift of concrete hardens sufficiently to preclude knitting and bonding of the two lifts. Except for the unsightly appearance, cold joints are typically not a concern unless the concrete is unreinforced or an environmental tank.

Commonly called bugholes, surface air voids are small, regular or irregular cavities, usually less than 5/8 inch in diameter, caused by entrapment of air bubbles in the surface of formed concrete. Bugholes are normal for vertical cast-in-place concrete and not considered a defect unless voids exceed the maximum size specified by the contract documents.

Getting a Good Vibe

CustomTech, a division of Custom Building Products - A QUIKRETE Company
December 18, 2020
Follow Us