Expanding Upon History at the Panama Canal 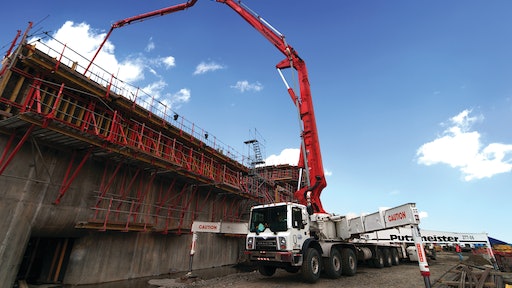 Putzmeister boom pumps are being used to precisely place a special marine mix to keep the salt water from permeating the structure.

Originally built in 1914, just 20 years later there was already a need for the Panama Canal’s capacity to be increased. It was determined the most effective and efficient way to do this was to construct a third set of locks with larger dimensions. In 1939, the United States initiated the construction of the Third Set of Locks to allow the transit of commercial and war ships that exceeded the size of the existing locks. However, the expansion was ceased in 1942 because of the outbreak of World War II.

Although the project was suspended, the need for increased capacity at the canal did not diminish. In recent years, the Panama Canal Authority (ACP), owner/developer of the project, conducted studies that again determined that a larger third set of locks would be required to double the canal's capacity and allow more traffic and longer, wider ships to pass through.

ACP’s primary initiative was the construction of two 1,400-ft. long by 180-ft. wide by 60-ft. deep lock facilities. One is being constructed in the Atlantic side and one in the Pacific side of the Canal. Each of the locks will have three chambers with three water reutilization basins each. The basins will allow the third set of locks to reutilize 60% of the water in each transit and use 7% less water per transit than each of the existing lock lanes.

The design-build contract for the project was awarded to Consortium Grupo Unidos por el Canal (GUPC), which is made up of four companies: Sacyr Vallehermoso S.A., Impregilo S.p.A., Jan De Nul n.v., and Constructora Urbana.

To begin placement of concrete on the bottom portion of the massive Panama Canal Third Set of Locks project (Third Set of Locks), six Telebelt TB 130s were sent to the site in August 2010. After their initial use in the rough conditions of the Panama Canal job site, GUPC realized the opportunity to lower their overall costs of concrete placement by bringing in additional Putzmeister equipment.

In early 2012, GUPC ordered six more TB 130s. The additional models have helped the team stay on track with the aggressive pour schedule.

“The Telebelts are true multi-taskers and have been crucial in laying the foundation for this project,” says Lucio Donadi, service manager for Agreconsa. “With their help, we are quickly finishing the bottom portion of the new locks.”

Putzmeister will be sending its Telebelt TB 200 to the site later this year. With a reach of 200 ft., belt width of 24 inches and output of up to 5 yd3/min, the TB 200 will be beneficial for reaching the tallest portion of the lock walls, and will allow for even quicker placement of material.

Six Putzmeister Jumbo Troughs are also at Third Set of Locks serving as surge hoppers for consistent concrete placement. Four Thom-Katt TK 40 shotcrete machines are being used to stabilize excavation work on both the Atlantic and Pacific sides of the project.

“While excavating the jobsite, it is essential to stabilize the soil walls to ensure safety moving forward,” explains Donadi. “The efficiency and ease of use of the TK 40s have been highly beneficial in this process.”

Three Putzmeister 58-Meter and one 52-Meter truck-mounted concrete boom pumps were also brought in to help build the walls. Two boom pumps are working on each side of the project.

The terrain at the Third Set of Locks has been one of the most difficult aspects of the project. “On either side of the canal, we are dealing with two very different types of land,” explains Bob Weiglein, Telebelt division manager for Putzmeister America. “While we’ve encountered land slides and unstable soil on the Atlantic side, the Pacific side is rock, which has caused a host of other problems.”

Overall, the construction team has been pleased with how the equipment has managed to maneuver the rugged terrain. “All of the equipment has been performing to our expectations under the difficult conditions,” says Donadi. “However, when we have encountered any challenges, the service and support from Putzmeister has been excellent.”

In addition to the land conditions, the concrete mix used at Third Set of Locks has proven tough to work with. One of the main mixes used to create the foundation for the locks is a Mass Aggregate, with an aggregate size from 1.5 to 3 inches, which is an extremely hard-wearing concrete and can be rough on equipment.

“The Telebelts have proven to be the ideal equipment for this job, as they can place multiple types of material,” explains Donadi.

Another type of concrete, called Marine, is a pumpable mix that is being used with the boom pumps. The Marine concrete is a special mix used for any part of the locks that comes into contact with water. In addition to compressive strength and contraction, the concrete had to be formulated to guarantee at least a 100-year life span with low permeability. This is to ensure the imbedded rebar is not reached by water, which would cause it to corrode.

“The boom pumps have worked great for placing the marine concrete because of the accuracy and precision required to place the mix exactly where it needs to go,” says Donadi. “The Ergonic Boom Control has been especially helpful because it allows us to set parameters that control the movement boom.”

The sheer size of the Third Set of Locks project has added unique difficulty to the placement of the massive amount of concrete. A large number of pieces of equipment and workers are being used to place the concrete, creating a fairly congested job site.

“The target monthly average of concrete to be pumped is approximately 110,000 cubic yards at each side of the project, says Donadi. “We are placing concrete somewhere on site 24 hours a day. We’re pleased that the equipment has stood up to the challenging schedule.”

Due to the demanding pour schedule, equipment needs to be moved often. “The ease of setup of the boom pumps has been beneficial, as well,” Donadi adds. “With so many moving parts on site, having equipment that is easy to maneuver is a huge time saver.

Construction at Third Set of Locks started in late 2007 and the target date for completion is August 2014 — 100 years after the initial locks on the canal were opened. At that point, the crews and equipment will have placed approximately 4.9 million cubic yards of concrete, in addition to gravel.