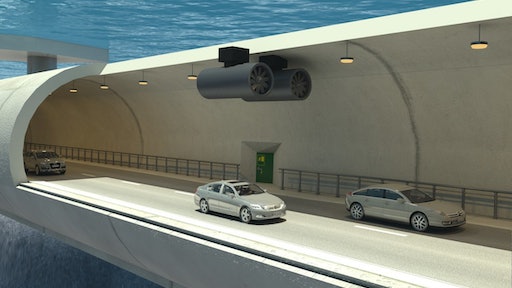 Norway has proposed a tunnel system that would be built about 100 feet underwater. The estimated $25 billion project would be the first of its kind in the world.

In a previous blog we took a look at infrastructure projects that could have been but never were. Now, we're taking a look at 10 giant infrastrucutre pojects currently in the works or recently completed that have the potential to not only reshape the cities where they are being constructed but possibly have world-wide effects.

The Gotthard Base Tunnel in Switzerland opened on June 1, 2016, after 17 years of construction. The 35-mile-long tunnel through the Alps is the longest and deepest train tunnel in the world. Amazingly, the $12 billion project was completed on time but did take the lives of nine people during construction. According to a New York Times article, "it took 125 workers in three shifts round-the-clock to install the concrete slab track on which the trains will run, with some sections as deep as 1.4 miles."

The high-speed rail running through the Gotthard Base Tunnel will cut the train trip between Zurich and Milan by about 45 minutes. The Swiss government hopes the high speed rail and tunnel will revolutionize freight and passenger transportation.

The newly expanded Panama Canal also opened in June 2016. The $5.4 billion expansion triples the capacity of the waterway, which first opened 102 years ago.

Completed in 2011, China's Jiaozhou Bay Bridge was the world's longest cross-sea bridge at 26 miles long as of December 2012. The bridge cuts travel time in half going between east China and the island of Huangdao. The six-lane bridge is designed to withstand severe earthquakes, typhoons and ship collisions. Supported by 5,238 concrete piles, the T-shaped bridge is constructed with 450,000 tons of steel and 2.3 million cubic meters of concrete.

On the border of Brazil and Paraguay, the Itaipu Dam supplies 75% of Paraguay's total energy and nearly 20% of Brazil's energy.

Construction of the hydroelectric dam started in 1975 and was completed in 1984. The last two of the 20 electric generation units started operations in September 2006 and in March 2007.

The amount of iron and steel used to build the dam would allow for construction of 380 Eiffel Towers, and the amount of concrete to built the power plant could build 210 soccer stadiums. Around 40,000 people were involved in the construction of the Itaipu, one of the most expensive objects ever built.

Deemed the largest construction project ever undertaken in Europe, London's Crossrail project involves a massive upgrade to the existing Underground system. It includes 10 new train lines and connects 30 existing stations with brand new tunnels. Plans for the upgraded Underground are to being service in 2017 and be fully operational by 2020. Crossrail is the first complete new underground line in more than 30 years.

Since construction started in 2009, over 15,000 workers have worked on the project including over 600 apprentices recruited for the job. Crossrail tunnelling began in the summer of 2012. Eight 1,000-tonne tunnelling machines have bored 26 miles of new 6.2-meter diameter rail tunnels under London.

The goal of India's Hyderabad Metro Rail, due for completion in 2017, is "To create an efficient, safe, reliable, economical and world class public transportation system in Hyderabad which will facilitate the city's transformation as a competitive global city with high quality of life".

The elevated Metro Rail will feature two tracks on a deck over the central median of the road designed not to obstruct road traffic.

Designed to link three cities in China's Pearl River Delta, the Hong Kong-Zhuhai-Macau bridge is scheduled for completion in 2017.

The project consists of a series of bridges and tunnels connecting the cities of Hong Kong, Macau and Zhuhai. The 31-mile bridge is expected to cost $10.6 billion. It was originally set for completion in October 2016 but has been pushed back to open in December 2017. Construction began back in 2009 with the last bridge tower being erected in June 2016.

Designed to revolutionize how residents of Riyadh, Saudi Arabia, get around, the $23.5 billion Riyadh Metro rail line features 109 miles of railway. The project will include creating six main metro lines and 85 stations. Construction started in 2014 with planned completion and operation by 2019.

To help move water from the Yangtze River to China's less fertile northern regions, the South-North Water Transfer Project has been designed. The ongoing effort to move nearly 45 billion cubic feet of water has spent more than $79 billion on the migration so far.

The project is the largest of its kind ever undertaken and has already taken 50 years from conception to commencement. It could take just as long to construct, with a planned completion set for 2050. When completed, the project will link China's four main rivers — the Yangtze, Yellow River, Huaihe and Haihe. Three diversion routes will be constructed across the eastern, central and western parts of China.

Plans were announced in July 2016 for a fully submerged, floating tunnel beneath the Sognefjord in Norway. The estimated $25 billion project would be the first of its kind in the world. The tunnel system would be built about 100 feet underwater. The tunnel would shorten a 21-hour trip along the coastline to just 10 hours through the underwater tunnel.

The structure would be made of two 4,000-foot curved concrete tubes that would float below the surface while being supported by pontoons on the surface. They would be kept stable with connecting trusses. The construction might be bolted to bedrock as well for extra stability.

For a look at a few other non-infrastructure construction projects that might have world-wide effects check out this article from Business Insider.

How do you see these projects affecting the construction industry and the future of infrastructure construction?

Are their any infrastructure projects you think are missing from this list?