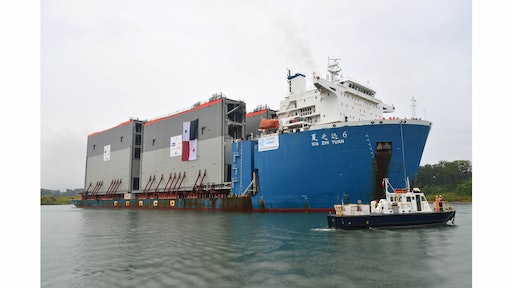 The final shipment of gates for the Panama Canal Expansion included two gates to be used in the Atlantic and two in the Pacific.

The Panama Canal Expansion reached another major milestone with the arrival of the final shipment of gates for the new locks.

“We are now in the homestretch to complete the Expansion,” said Panama’s President Juan Carlos Varela during a brief ceremony commemorating the arrival of the gates.

"This is a major milestone for the Panama Canal Expansion since we now have all 16 rolling gates in Panama to be installed in the new locks," said Panama Canal Administrator Jorge L. Quijano.

The final shipment included two gates to be used in the Atlantic and two in the Pacific.

The two gates to be installed in the Pacific locks are the tallest of all 16, standing 33 meters in height and weighing 4,232 tons. These gates will be used in lock head four facing the Pacific Ocean.

The two gates to be installed in the Atlantic locks are 10 meters wide, 29 meters in height and weigh 3,319 tons.

All gates have the same length of 57.6 meters but vary in height, width and weight depending on their location in the locks. The height of the tallest gate can be compared to an 11-story building.

The construction of the gates began in October 2011 by subcontractor Cimolai SpA in Italy. The new locks will have a total of 16 rolling gates (eight for each new lock complex).

The gates belonging to the Pacific have been transiting one by one through the current waterway on board a barge assisted by two Panama Canal tugboats. Currently, four of the eight gates have already been transferred to the construction site in the Pacific.