With the flooding of a canal section in June 2015, tests have begun in readiness for the scheduled opening of the expansion project in 10 months time. 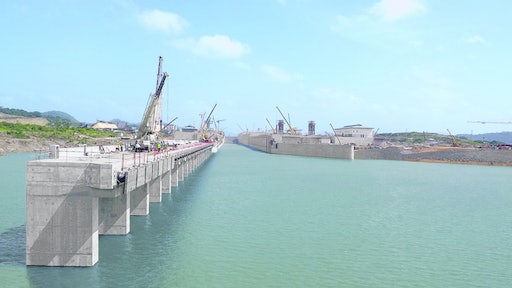 Approximately 10 months before the scheduled opening, the first test sections of the expanded Panama Canal were flooded. For PERI, this also means that the mega project will therefore be completed soon.

With the flooding of a canal section in June 2015, tests have begun in readiness for the scheduled opening of the expansion project in 10 months time. Since 2011, PERI has delivered around 1,100 containers of formwork and scaffolding materials to Panama. Once again, the company has demonstrated its superb service capabilities as well as ability to deliver – in this particular case through the excellent teamwork of several subsidiaries.

The Panama Canal connects the Atlantic Ocean to the Pacific Ocean, and is a key conduit for international maritime trade. About six percent of the world’s trade in goods passes through the Panama Canal. Opened in 1914, the canal has been expanded within the recent years. Two new locks have been built on the Atlantic and on the Pacific side, thus the canal can be passed by larger container ships in the future. Now, around 10 months before the canal's re-inauguration, part of the canal was flooded for test purposes. Only 10 percent of the project work is still to be finished.

For PERI, this also means that the largest single order in the 45 year history of the company is now slowly coming to an end. Due to its enormous dimensions and complexity, the project posed its own set of significant challenges in terms of know how, logistics and construction site support. However, the extremely close and constructive cooperation between the different PERI national subsidiaries has had a very special importance during this gigantic project. The transnational cooperation of engineers, logistics specialists and other experts played a key role in ensuring the success of the project.

Scientists created a spray-applied barrier material to replace the SBR-based latex waterproofing Part one of the Vapor Intrusion Mitigation series.
Land Science, a division of REGENESIS
January 15, 2021
Follow Us