Contractor had to provide an efficient external heating solution to hold concrete temperatures to a range of 50° to 85° F with ambient temperatures as low as 25.2° F. 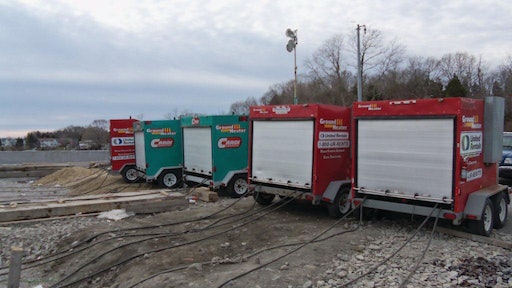 Spanning the winter months of 2011 and 2012, Cardi Corporation was charged with cold-weather concrete curing on the $160 million Sakonnet River Bridge from Tiverton to Portsmouth, R.I. The contractor had to provide an efficient external heating solution to hold concrete temperatures to a range of 50° to 85° F with ambient temperatures as low as 25.2° F. With contractors pouring an acre of concrete at a time, the heating solution had to be cost-effective for large areas.

Time was of the essence. The only option was to make multiple bridge deck pours during the winter months spanning 2011 and 2012. “The contract used calendar days, so it did not matter if winter delayed us,” says Keith Catanzaro, superintendent for Cardi Corporation. If crews missed the May 11, 2012 target, “we would receive $16,500 per-day disincentive for every day beyond the deadline, so we could not miss our end date,” he added.

Faced with cold-weather concreting the bridge decks, Cardi needed an external heating solution to ensure the concrete did not freeze. “The Rhode Island Department of Transportation (RIDOT) requires concrete to hold to a temperature range of 50° to 85° Fahrenheit during the winter,” Catanzaro says.

The bridge deck spanned the Sakonnet River more than 130 feet above the water’s surface. Its steel box girder construction left 12-foot-wide sections of the underside virtually exposed to frigid winter winds reaching 50 mph. Constructing tents below the deck for propane heaters would be impractical and expensive. Catanzaro put the required monthly barge rental at $13,000, and the winds would wreak havoc on the poly enclosures.

Cardi considered using electric blankets on top of the bridge deck to maintain consistent concrete curing temperatures. The sheer size of the pours made this option unrealistic. “We were pouring nearly an acre of concrete at a time, so blankets were too expensive,” Catanzaro says.

Cardi’s crews had previous experience using the E3000 to cure concrete. The owner of the $270 million building had Cardi on an extremely tight project completion timeline that could not be missed. In this cold-weather concreting application, Cardi successfully poured footings, foundation and slab-on-grade concrete during the winter months using two E3000s.

Engineered for reliable performance, the E3000 comes standard with 3,000 feet of hose, allowing it to effectively cure up to 6,000 square feet of concrete, up to 18,000 square feet with accessories. Providing a gross heater output of 385,000 BTU/hr and 83 percent heater efficiency, the E3000 delivers a normal temperature operating range of 100° to 180° Fahrenheit. Its large, 230-gallon fuel tank provides up to 140 hours of continuous run time between refueling.

Even with Cardi’s wealth of experience with the E3000 and the latest ACI 306R-10 specification for cold-weather concreting including hydronic heaters as a viable solution, RIDOT required temperature monitoring and additional proof of its effectiveness. Catanzaro recommended using temperature loggers already approved for the job to ensure the concrete curing temperatures met spec. “We put the sensors wherever RIDOT specified – on the deck, on girders and under the deck,” says Catanzaro.

These models provided Cardi an effective heat protection strategy for the concrete placements to meet RIDOT’s specifications. “Ed and Wacker Neuson have been fantastic to work with,” Catanzaro says. “Without this engineering assistance, the project would have been a no-go.”

After adjusting mix design to allow crews to get on the concrete in a timely fashion, paving of a 200-foot-long section of bridge deck commenced. The concrete mix included a slag retarder, which enabled crews to finish the pour prior to the deck setting up. It also enabled crews to apply heat within 7 hours, so concrete temperatures would not dip below 50° Fahrenheit.

To direct heat onto the concrete surface, crews used Wacker Neuson IB 750 insulating blankets. Catanzaro mentions that the blankets worked well retaining the heat. Crews found it much easier to keep the blankets in position versus trying to repair a damaged section of poly tent under the deck.

Post-curing analysis of temperatures found the concrete remained within spec temperature range, allowing the concrete to properly gain strength. “Wacker Neuson’s temperature model projections were very close to actual results on this job, and Ed adjusted the models using actual field conditions on this job to assist with future pours,” Catanzaro says. “The state is very happy with these results.”

With a successful pour complete, Cardi looks to place approximately half of the 10 pours during cold-weather concreting conditions. Using the E3000 Hydronic Heaters from Wacker Neuson, the contractor is making great strides to, once again, be ahead of schedule.